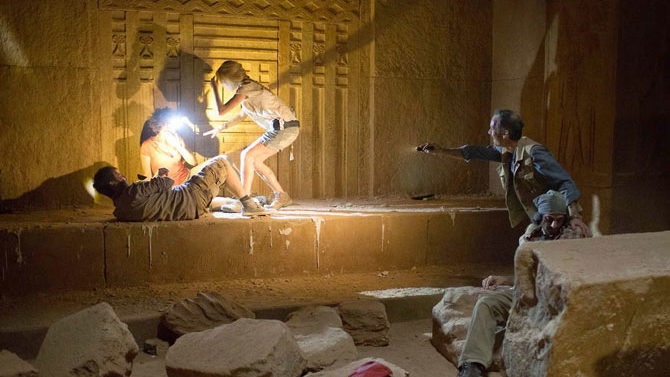 Horror film distribution is infuriating. So much great horror—Starry Eyes and The Babadook to name merely two—is flooding the VOD market, yet The Pyramid gets a wide release. Not even Alexandre Aja’s superior, latest film Horns could get as wide a release as the directorial debut of his filmmaking partner, Gregory Levasseur. This is barely a step above Syfy-grade horror that mixes the ingredients of so many better scary flicks together.

A father-daughter archaeological team (“American Horror Story”’s Denis O’Hare and the very pretty Ashley Hinshaw, who makes as unconvincing a scientist as predecessors Denise Richards and Tara Reid) enter a long-lost pyramid with a news crew (James Buckley and Christa Nicola) and a robotics expert (Amir K) only to discover that something deadly walks the tomb.

Actually, the last-act reveal is a wildly entertaining twist on Egyptian mythology that gets lost in the cacophonic sound design. The ear-shredding Event Horizon finally has some competition for uncomfortably loud horror.

The Pyramid would have been more scarily successful as a haunted Saw house than as a creature feature. The CGI is really terrible, but what is worse is how uninterestingly the creatures are introduced. This movie makes August’s As Above, So Below look relatively fantastic.