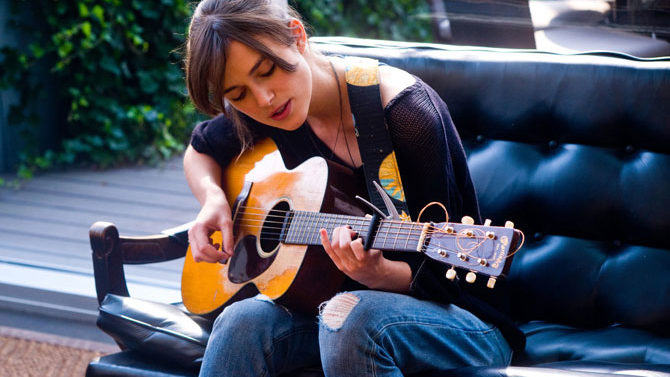 BEGIN AGAIN (R) It’s a common lie that the Hollywood musical is dead. The genre doesn’t have the pop culture pull that it once had in its heyday, but the occasional, sensational feature does razzmatazz its way into theaters every few years. Writer-director John Carney, who directed the 2006 indie breakout hit Once, has a strong tendency toward the musical-driven narrative. Once was thoroughly mired in naturalistic cinema, but it also subtly strained toward the dramatically obvious, slathering us into the realm of the unreal. In other words, it was a full-blown musical. Just because it projected the illusion of realism, didn’t make it effectively real. Nevertheless, Once was a major indie movie box office success and a critical darling.

Begin Again, starring Mark Ruffalo and Keira Knightley, continues Carney’s interest in musicians and how songs drive their inner emotional impulses. Ruffalo plays a burned-out, middle-aged music label A & R executive who spends his waking hours boozing it up and attempting to run away from his familial responsibilities to his estranged wife, Miriam (Catherine Keener), and his teenaged daughter, Violet (Hailee Steinfeld). One night Dan (Ruffalo) drunkenly encounters 20-something Gretta (Knightley) performing at a small club. Gretta has come to big, bad New York City with her boyfriend, Dave (Adam Levine), and has felt unmoored since Dave hit it big in the biz and indulged in excess more than working on his relationship with her. Despite his personal problems, Dan believes in Gretta and her music and works to make her career skyrocket.

Once, despite its smoke-and-mirrors sincerity, did manage to convey a sense of real emotion from its otherwise clichéd and labored narrative. The duo of Glen Hansard and Markéta Irglová made for a somewhat compelling movie couple—downplayed and temperately identifiable. Although their relationship was clearly platonic, the romantic attraction between the two was ever-present. Begin Again ups that theme here, yet Carney and his actors somehow manage not to sink into creepy territory. Dan and Gretta are attracted to one another, but it’s ultimately about the music, folks.

Begin Again has its significant moments, though it’s disappointing, because Carney’s artistic sensibilities come off as squarely middle-brow. From its performances to its songs to its shot selections to its overall “message,” Begin Again feels lazy and safe. Most all of the performances, including musician/celebrity Levine’s, are solid. But that’s exactly the problem. The whole endeavor feels… well, fine. Uninspired. For a movie about the hunger for creativity and how we need that inspiration to prosper imaginatively, Begin Again is dead air. If Kenny Loggins were a movie, he’d be mimicking Carney’s song.