Snowpiercer Makes for a Smashing Dystopian Science-Fiction and Political Parable 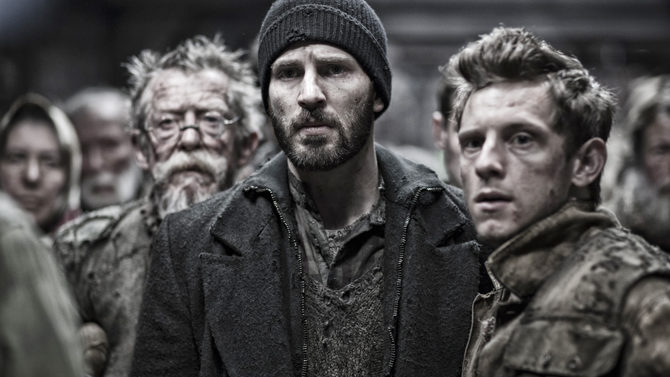 SNOWPIERCER (R) An experimental attempt to reverse global warming goes horribly wrong, and the entire planet is encased in ice and snow. Most humans are frozen to death, but the few remaining survivors now exist on a fortified train that circles the globe. The underclass live in filth and squalor in the back of the train, drinking recycled waste water and surviving on manufactured protein bars; the more privileged citizens comfortably live in the front sections, eating whatever they want and numbing themselves with drugs and drink. Revolution is in the air, however, and a band of dissenters, led by the grimacing Curtis (Chris Evans), make their move to take over the train, fighting their oppressors one car at a time until they get to the front and confront the mysterious Wilford, the mastermind behind the train’s “eternal engine.”

Based on a French graphic novel, Le Transperceneige, created by Jacques Lob and Jean-Marc Rochette, Snowpiercer makes for a smashing dystopian science-fiction/political parable for South Korean filmmaker Bong Joon-ho. It’s also the director’s first English-language movie. Bong’s small body of work is exceptional, particularly his 2003 police procedural Memories of Murder and the 2009 drama Mother. But it’s his inventive 2006 giant monster movie, The Host, that Snowpiercer closely resembles in how both movies thoroughly embrace genre tropes, but then skewer viewer expectations with brazen tonal shifts and visually dazzling sequences, sometimes bordering on the surreal.

Snowpiercer starts off grim and brutal. Curtis, with his trusted mentor Gilliam (John Hurt), his loyal allies Edgar (Jamie Bell) and Tanya (Octavia Spencer), leads a ragtag group against the well-armed authoritarians, headed by Wilford’s second-in-command, Mason (Tilda Swinton). Swinton’s performance is aggressively cartoonish, channeling Margaret Thatcher mixed with a Monty Python drag performance. She’s brilliant and grotesque in the role, but what makes it more than a one-note caricature is how she also generates cunning and terror. Many of the performances in Snowpiercer are excellent, particularly from Evans, Bell and Hurt.

What makes Snowpiercer the best blockbuster in theaters now, however, is how it delivers the action goods (it’s violent, so be warned), but also surprises, even though its narrative is streamlined and thrusts us into the expected. Bong delights in surprising us as the rebels fight onward, delivering some spectacular, jarring sequences. Much like director Terry Gilliam’s movies (no mistaking why Hurt’s character is named after him), Bong likewise knows how to infuse a sense of wonder into every frame. There’s nothing else like it in theaters.