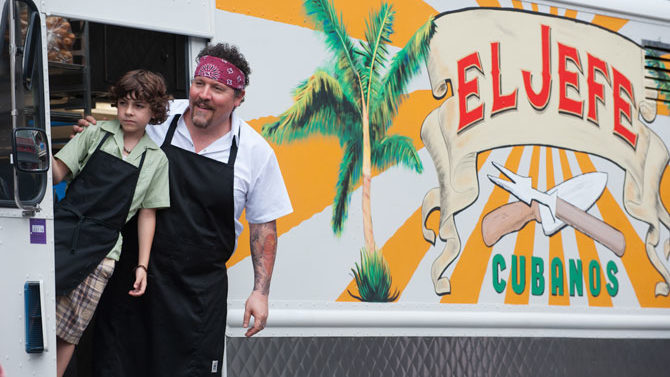 CHEF (R) After spending the last 11 years or so helming slick, big-budget and personality-free Hollywood studio pictures (Elf, Iron Man 2 and Cowboys and Aliens), director/writer/actor Jon Favreau attempts a return to his indie roots with Chef. (He wrote and starred in the 1996 comedy Swingers.) Favreau plays Carl Casper, a punchy chef at a high-profile, trendy Los Angeles restaurant, who has a major career meltdown after he receives a scathing review by a notable food critic (Oliver Platt) and subsequently starts a social media feud with the snide scribe. What makes the review so painful is that Casper wasn’t cooking from his heart but following the orders of the restaurant’s owner, Riva (Dustin Hoffman), who ordered Casper strictly to follow his own bland menu ideas. Casper has been playing it safe and is now paying the price for betraying his own culinary instincts. After his public blowup, captured on video by several of the restaurant’s patrons, the tempestuous single dad flounders around, at one point even contemplating becoming a contestant on the reality show “Hell’s Kitchen”. Instead, Casper relocates to Miami and devises a way to get his mojo back: running his own food truck with his ex-sous chef/kitchen comrade (John Leguizamo) and his son (Emjay Anthony). But will Casper’s attempt to refire his career and life convince his loved ones that he’s not simply delaying growing up?

There are plenty of food porn montages in Chef, and lovers of watching food carefully and lovingly prepared in bright closeup will be seduced by this amiable, though overlong, comedy. With his blustery onscreen everyday-bro charm and big-gut swagger, Favreau is enjoyable to watch, and his desire as a filmmaker to recapture his indie roots is admirable in some ways, although the attempt ultimately feels disingenuous, considering that so many big stars (Hoffman, Scarlett Johansson, Robert Downey, Jr.) all have inflated cameos in it. In essence, Chef is just a vanity project for a big studio jobber searching for his cinematic soul again. As Casper wants to reclaim his career making unpretentious street food, Favreau likewise yearns to make a small character-driven indie comedy. The recent John Turturro movie, Fading Gigolo (reviewed in the May 14 issue of Flagpole), was also a vanity project, but that movie’s director is far less enamored of the studio machine. Favreau bites the hand that feeds him, but he’s far too shrewd to chomp.