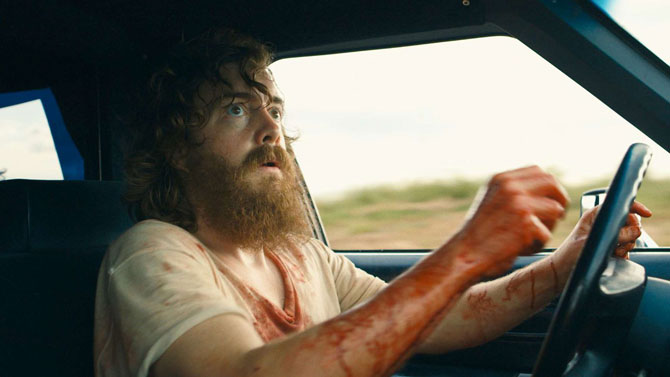 BLUE RUIN (R) The plot is straightforward and economical: A convicted murderer is released from prison, and the son of the two victims, Dwight (Macon Blair), exacts revenge. Movies about vengeance are efficient, classic and lazy, but filmmakers keep returning to the theme because it’s inherently dramatic and gripping. Directors such as Sergio Leone, John Woo and Quentin Tarantino (as well as countless exploitation filmmakers) based much of their careers on storylines about revenge, and stars like Clint Eastwood and Charles Bronson forged their fame in the blood of Old Testament-style narrative comeuppance. An eye for an eye and a tooth for a tooth make for box office bonanzas.

Director/writer/cinematographer Jeremy Saulnier, however, tries for something different in his take on the theme and succeeds brilliantly. Blue Ruin is a stunner from the first frame and never lets up until the credits roll. Even after that point, you’ll still be shaken by the fierceness of what transpires in the movie’s tightly-wound 90-minute running time. Saulnier never wastes a frame or fritters our time with needless backstory or secondary plot lines. Blue Ruin is assured from its opening moments and steadily rewards the viewer with scenes that never play out the way you think they will, even though the incidents are familiar to anyone who’s ever watched an action movie based on the theme of righteous bloodshed.

Blue Ruin is remarkable, because it takes place in our world, not the faux-realism of Hollywood with its can-do, chiseled muscle men who can always rise to every action occasion. With his shaggy, unkempt appearance and hangdog eyes, Dwight is out of his league when he decides to embrace revenge. When he’s wily enough to break into a truck to obtain a firearm, what happens next to him is one of the movie’s great absurdist moments. His inexperience in meting out violent justice plays out in a variety of shocking and funny ways throughout the story and makes for much of Blue Ruin‘s unbearably suspenseful sequences.

Although filmed on a low budget and starring a cast of mostly unknowns—Eve “Jan Brady” Plum does figure in a small yet pivotal role—Blue Ruin shames the majority of big Hollywood thrillers. This is a finely crafted achievement and one that should be seen on the big screen for maximum impact. Fans of the Coen brothers’ crime work and movies like Reservoir Dogs, One False Move and Shotgun Stories will find much to love here. It’s damn near perfect.