Under the Skin: The Woman Who Fell to Earth 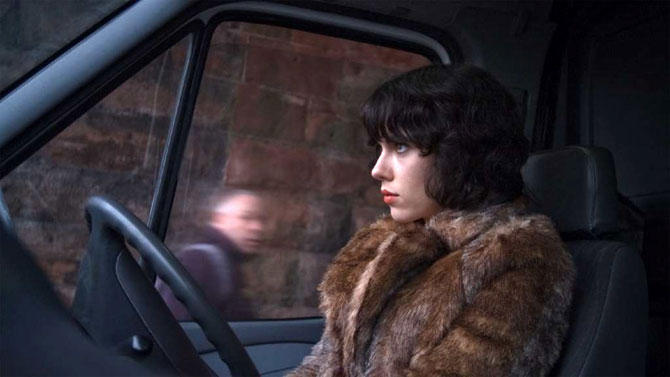 UNDER THE SKIN (R) Moviegoers lamenting a lack of mystery and real strangeness in contemporary cinema will find plenty to love in director Jonathan Glazer’s latest, the perplexing yet always hypnotic science fiction movie Under the Skin. Based on Michel Faber’s 2000 novel of the same name, Glazer’s picture (his first since the elegant and haunting Birth from 2004) is a truly immersive experience. It’s an art house head trip, beautifully visualized by cinematographer Daniel Landin and given an anxiety-fueled soundscape by composer Mica Levi, with a bold, steely and confident performance from Scarlett Johansson at its inky-dark heart. Fans of Johansson’s mainstream Hollywood movies will be in for an icy cold surprise, however, if they are expecting another one of her glamorous turns. Under the Skin is bizarre, aggressively arty and creepy. It’s also one of the best movies of the year so far and proof that Glazer is one of our most fascinating filmmakers working in commercial cinema.

Johansson plays an alien who has come to Earth—specifically gritty and decayed Glasgow, Scotland—and is mysteriously traveling through the city picking up men and then luring them to their deaths for some unexplained purpose. These scenes, using mostly non-actors and filmed with hidden cameras, give the movie a strong sense of authenticity and edginess. Johansson is mesmerizing to watch, as her character prowls the streets hunting for sexually needy men. The scenes are unnerving, because the alien is clearly studying its prey before it destroys them, sponging up their humanity so that it may become more like us. The scenes snap with an awkwardness that is refreshing, since many of the men are shy and uncomfortable dealing with Johansson, unaware that they’re interacting intimately with one of the most recognizable actresses in the world.

But there’s also something oddly, eerily beautiful going on, too: The alien views our world with beguiling wonder and increasing terror. Glazer superbly conveys how the otherworldly is embedded in the mundane. Nicholas Roeg and David Lynch are similarly both masters of delivering strong emotional impressions in their best work, but Glazer untethers Under the Skin from narrative constraints even more, with the notable exception of Lynch’s cult classic Eraserhead. Like both Roeg and Lynch, Glazer shares in plunging the viewer into an unfolding mystery and has no qualms about leaving us within it. Under the Skin is an extraordinary journey and one you won’t soon forget.