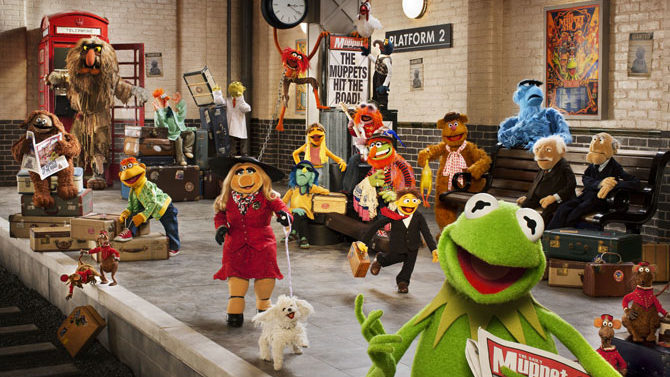 MUPPETS MOST WANTED (PG) Let’s get this out of the way first: Muppets Most Wanted is in no way as good as its predecessor, the revamped, re-energized The Muppets (2011). The first movie, also directed by James Bobin and written by Jason Segel and Nicholas Stoller, was a delightful, nostalgic and witty reboot of the beloved Jim Henson franchise. This second movie takes up where the first one left off, and it recaptures a lot of the open-hearted silliness of The Muppets, even addressing how problematic it is to make a sequel, a standard reflexive act if ever there was one with the opening song “We’re Doing a Sequel.” The song explicitly courts how difficult it is to follow up a successful original movie.

It’s true. Muppets Most Wanted is not a worthy successor to The Muppets. But it does have several hilarious bits and numerous actor cameos to ease the mild disappointment. Constantine, the frog who looks almost exactly like Kermit, busts out of a gulag prison in Russia and devises a way to rip off the Muppets of their riches, with the help of nefarious entertainment agent Dominic Badguy (Ricky Gervais). Their scheme? To lure the gaggle of scene-stealers to tour Europe with their show and make sure that each venue is conveniently next to a bank or an art museum. Then Constantine and Badguy can get to business robbing the joint.

Muppets Most Wanted is one convoluted, fuzzy-headed sock puppet of a movie, narrative-wise. It also gives way too much time to the human actors, although many of the flesh performances are amusing, particularly Tina Fey as a gulag commandant and Ty Burrell as an Interpol secret agent forced to work with CIA agent Sam Eagle. The Muppets themselves—Kermit, Miss Piggy and Fozzie Bear—are simply not on screen enough, shoved aside to make room for the numerous cameos from Ray Liotta, Christoph Waltz, Zach Galifianakis, Celine Deon and many others.

But it’s hard to deny the hammy love of these exuberant critters. Muppets Most Wanted makes for a fine family movie and opens the door for many more movies to come.