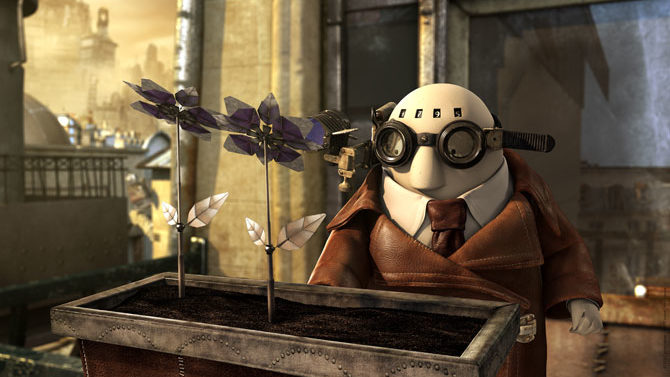 THE OSCAR NOMINATED ANIMATED SHORT FILMS 2014 (NR) Not surprisingly, when one thinks of the Academy Awards, the big prizes always come to mind. Short films easily get ignored by the general movie-going public because of how distribution works in the commercial marketplace and how the presentation of short movies is relegated only to film festivals and special events. For the last few years, however, the nominees for Best Animated Short Films and Best Short Films have been compiled in a showcase, giving audiences an opportunity to view some extraordinary and entertaining films on the big screen they otherwise would have never known existed.
The Oscar Nominated Animated Short Films 2014 showcase has been in town for the last few weeks, and it is a rewarding experience offering up a rich array of disparate approaches to the form. In the animated block, we start off with Daniel Souza’s beautifully constructed production Feral, about a young boy taken from the wilds and forced into civility by his hunter guardian. It’s a marvel of texture and technique, reminding us of what animation can convey over live action. Next up is the slyly witty and nostalgic Disney short Get a Horse, the first animated Mickey Mouse cartoon in decades. Director Lauren MacMullan doesn’t harken back to the past for easy pastiche, but instead creates something innovative and special by bringing Mickey and Oswald the Lucky Bunny (!) into the modern age in a breathtaking, fun way. In the futuristic Mr Hublot, the winner of this year’s award, directors Laurent Witz and Alexandre Espigares focus on the title character, a melancholy, hapless man who never leaves his apartment and must face new challenges when he obtains a new robot dog that eventually draws his new master out of his cracked shell. It’s a wonderfully inventive piece. Shuhei Morita’s Possessions is a real wonder, mixing stately compositions with a more frantic anime style. Visually and thematically, it perceptively deals with the clash of modernity and the past, something that feels very Japanese and universal at the same time. The longest movie of the bunch is Room on the Broom, from the UK, directed by Max Lang and Jan Lachauer. Based on the book by writer Julia Donaldson and artist Axel Scheffler, it’s an enchanting and humorous ride. Not the best of the bunch, but a splendid ending nevertheless. This series of movies should please any serious fan of animation.