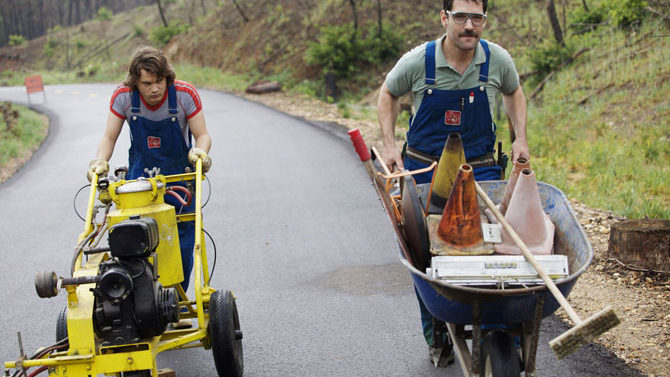 PRINCE AVALANCHE (R) One of the great lies of commercial cinema is that a movie must always adhere to a clear plot, contain easily identifiable (preferably likable) characters and never lose sight of its ultimate mission: keeping an audience constantly entertained. In director/writer David Gordon Green’s latest feature (his eighth), reworked from the 2011 Icelandic movie Either Way, those lies are acknowledged with tentative authority. Prince Avalanche does indeed include a straightforward narrative and recognizable characters and is always warmly humorous. But it’s how Green chooses to chart the course through his story, allowing for significant moments of visual and narrative detours, that makes the movie special and ultimately emotionally rewarding.

Prince Avalanche is not a great movie, but it’s the kind of feature that an attentive viewer will find filled with great, minor-key riches. In other words, it’s the kind of movie you can crush on.

It’s 1988, and two road workers, the fastidious and solitary-minded Alvin (Paul Rudd) and the younger, more impulsive Lance (Emile Hirsch), diligently work their way through a Texas backwoods ravaged by wildfires, repainting the yellow center lines on desolate roads. It’s boring work, but Alvin, in particular, tries to view the monotonous labor as his romantic, heroic calling. Sporting a moustache and quick to chastise Lance for not willingly embracing the sweaty, masculine, fulfilling discipline of manual labor, Alvin is one tightly wound patchwork Thoreau. Lance, on the other hand, is more apathetic and slovenly, more concerned about getting laid and partying than focusing on the strict self-empowerment regime that Alvin attempts to live by. Both men are lost and in their own ways trying to find some semblance of balance.

With its limited cast and tightly focused examination of male relationships, Prince Avalanche could easily be a static stage play. However, Green and cinematographer Tim Orr approach the material with a vivid and subtle hallucinatory beauty, calling forth a visual sensuousness that is rich with metaphorical and thematic detail. The real joy of the movie, though, is Rudd and Hirsch. Each of them gives a dynamic performance, able to generate low-key hilarity and moments of dramatic vulnerability within a single shot.

Green launched his career making independent movies with a strong visual sense, like George Washington and Undertow. He then dived into big Hollywood productions such as Pineapple Express and television work, most notably Eastbound and Down. But Prince Avalanche may be his most rewarding work yet.