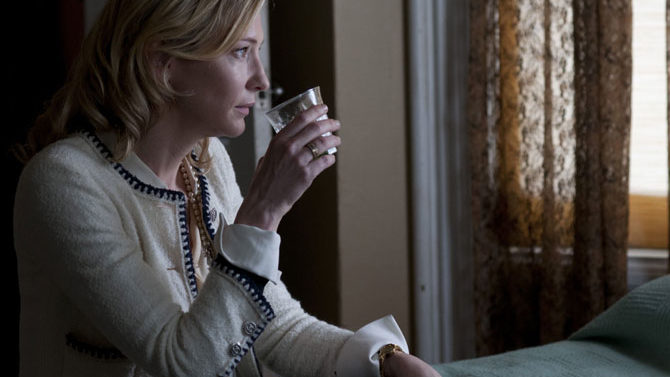 BLUE JASMINE (PG-13) Cate Blanchett has the best peepers in movies today. Within a single take, her eyes can convey a number of thoughts and feelings: furtiveness, elation, confusion, self-awareness and panic. In Woody Allen’s latest, the brilliant Blue Jasmine, Blanchett delivers a performance simultaneously cagey and raw, yet always set aflame by that disconcerting, discerning stare. Blanchett plays Jasmine Francis, a formerly wealthy Manhattan trophy wife now living on the skids in San Francisco with her working-class sister Ginger (Sally Hawkins). Jasmine and her late husband Hal (Alec Baldwin) were once the center of their New York City-centric social milieu, throwing lavish parties, dining at the finest restaurants and globetrotting at their whim. They were not just rich, but filthy rich. However, when Hal is exposed as a criminal because of his financial dealings, Jasmine’s world of security and privilege disappears… as does her sanity.

Blue Jasmine is Allen’s best movies in years, featuring one of the finest female characters he’s ever written. Jasmine is initially propped up as a comic target. In the first scene aboard a plane and then at the airport, Jasmine verbally unloads on a fellow passenger her exhausting personal history, unmindful of personal boundaries and social decorum. It’s a hilarious scene, yet also one tinged with sadness. This precarious balance of icy humor and pathos runs through the entire movie. Scenes frequently start off comically and then segue into darkness, resonating with a brutal understanding about our inability to ever change from our fixed natures. Blue Jasmine does have plenty of laughs and comic insights, but there is a hard, cynical view of humanity on display as well. Jasmine is a creature self-made with layers upon layers of pretensions. In another movie she would be loathsome. But here, Blanchett infuses Jasmine with weary fragility and flashes of self-awareness. She is a Blanche Dubois for the Bernie Madoff era.

Although Blanchett’s performance is a stunner, Hawkins is equally superb, though more subdued and covert. At times, she is reminiscent of the great late British actress Katrin Cartlidge, who like Hawkins also worked with director Mike Leigh and easily stole scenes. The supporting cast, including Baldwin, Louis CK, Bobby Cannavale, Peter Sarsgaard and Andrew Dice Clay, all turn in excellent performances as well. Blue Jasmine may disappoint viewers hoping for another whimsical Midnight in Paris, but Blanchett’s sometimes harrowing portrayal of a woman coming undone is a perverse joy to behold.