Artists at the Well 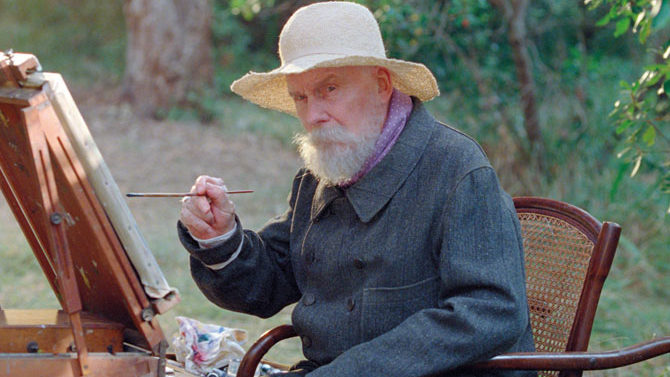 RENOIR (R) World War I is still raging on, and the young Jean Renoir (Vincent Rottiers) returns to his family’s estate, Cagnes-sur-Mer, to nurse his combat wounds. Jean’s elderly, ailing widowed father, the Impressionist painter Pierre-Auguste Renoir (Michel Bouquet), spends his time painting and obsessing over his latest muse, the beautiful red-haired Andrée Heuschling (Christa Theret). The patriarch Renoir desires her, but the younger son pursues a relationship with Andrée, and she becomes a vital inspiration to both men.

This is a different kind of summer movie—one free of frenetic action and tumult, those kinds of things we usually gravitate to during this cinematic season. Instead, director/writer Gilles Bourdos’ nostalgic Renoir offers up something more contemplative and placid than a knot work of thrills and action: an examination of two legendary men at a pivotal time in their relationship and in their art. The elder Renoir was a master of his creative domain, and his son would go on to become a master of filmmaking, the most dominant art of the 20th century.

Renoir is indeed seductive on a cinematic surface level. Cinematographer Mark Ping Bing Lee vividly captures the golden Mediterranean light, and his work on the picture fittingly lulls us into the lazy hours that envelope the Renoirs and Andrée. The light and space of the south of France are intoxicating, and Renoir is enticing and pleasurable. Where it stumbles a bit is on a dramatic level. The actuality of the story is fascinating, and Andrée did play an important role in both men’s lives. She eventually became Jean’s wife and starred in a number of his early silent movies before retiring from the acting profession in the 1930s.

But Renoir‘s airy narrative never does plunge deeper beneath the surface. Bouquet is always convincing as the great painter, his performance nuanced and quietly affecting. Rottiers is far more mannered and much too handsome as Jean, giving us little glimpse of the great filmmaker he would become. More problematic still is Theret. Though she is physically alluring, Andrée also comes off as manipulative and increasingly unlikeable.

Regardless of its faults and lack of directorial conviction, Renoir still works its subtle charms, and it is hard to grow restless spending time in such atmospheric splendor and in the company of such brilliant minds. It’s just that the Renoirs deserve so much better.