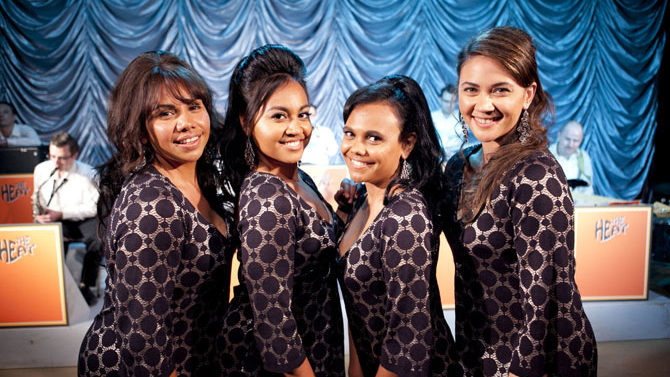 THE SAPPHIRES (PG-13) Isolated on a reservation in Australia’s outback in the late 1960s, three Aboriginal sisters—Gail (Deborah Mailman), Cynthia (Miranda Tapsell) and Julie (Jessica Mauboy)—dream of making it big with their singing act. The women have heart and talent, but they are far from being polished performers. They enter a talent competition, and though the group is awkward on stage, they win over a tough all-white crowd by singing Merle Haggard’s country classic, “Today I Started Loving You Again.” However, the bigoted judges are not impressed and refuse to give the women their well-deserved prize. The show’s shady yet still charming (and drunk) Irish emcee, Dave (Chris O’Dowd), is interested in working with them. He lands the ladies a big gig and a chance to escape their racist backwater by traveling to Vietnam and entertaining U.S. troops. Dave convinces them to scrap the country tunes for Motown soul instead, and the group takes on another member—their cousin Kay (Shari Sebbens)—while in transit to the war zone. The troops love them, but the group faces several challenges abroad that even the magic of song may not cure.

Based on Tony Briggs’ play of the same name (which was loosely derived from his mother’s and aunt’s own experiences), The Sapphires wants to win your heart over like an overly enthusiastic slobbering puppy. It is difficult to resist. Movies like this frequently get slammed for being light or inconsequential in an age of muscle-headed, angst-fueled comic book action, as if the latter’s melodrama is somehow more relevant and worthy of serious consideration. Both are cheesy, and there is nothing wrong with a big helping of it from time to time. The Sapphires, directed by first-timer Wayne Blair, is mostly freewheeling (it does get more serious once in Vietnam) yet filled with several moments of narrative strain (the Melbourne sequence and the in-fighting between the women). But Blair does make several insightful comments about racial identity, and the performances are mostly very good. Chris O’Dowd (the bloke who played the charming cop in Bridesmaids) is an engaging scene-stealer, although even he cannot upstage these women when they belt out their tunes. As it should be.