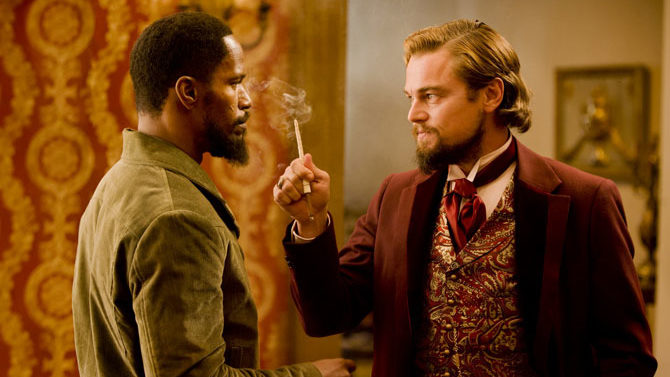 This being a Quentin Tarantino movie, Django Unchained is sprawling, self-indulgent and filled with loquacious characters and crammed with ultra-violence. It’s also a helluva lot of fun, and Foxx and Waltz make for a splendid duo, their friendship being the real heart of the picture. Racists eat lead, the heroic suffer, and evildoers get their comeuppance. It’s not a serious examination of slavery, but it does confront the barbarity of slavery with open eyes in a way that pop culture hasn’t seen since the 1970s. Part spaghetti western, part Blazing Saddles and surprisingly more old fashioned when it comes to morality than we’re used to with Tarantino, Django Unchained is a revisionist western with style, attitude and grit. It shares with Inglourious Basterds a bold rethinking of history, turning the victims of atrocious violence into the victors, giving audiences the opportunity to cheer for true underdogs. It may be a lie, but it’s an emotionally satisfying one.

Visually and tonally, Django Unchained is a lot closer to the Kill Bill movies than Inglourious Basterds, the latter focusing on the verbal more than action and feeling stagey except for a few breathtaking moments. Here, the scope is appropriately epic, and Tarantino and cinematographer Robert Richardson fill the screen with snowcapped mountains, barren deserts, oppressive swamplands and elegiac sunsets. The movie is set in the South, but Tarantino takes great liberties with locale, something another cinematic prankster named Sergio Leone did in his westerns.

Django Unchained is more ragged than the tightly focused Inglourious Basterds. Where it also differs is in the representation of violence. Django Unchained is gleefully gruesome (except in the scenes when slaves are tortured, clearly not played for humor) and lacks the visual sophistication that Tarantino exhibited during the finale of Inglourious Basterds. In that movie, the late Sally Menke’s editing schemes reveled in constructing a fascinating collision of fiction and reality. Django Unchained at first comes on like a radical reworking of the genre, but ultimately settles in for easygoing (albeit bloody) entertainment. It’s also further proof of how vital the western genre still is.