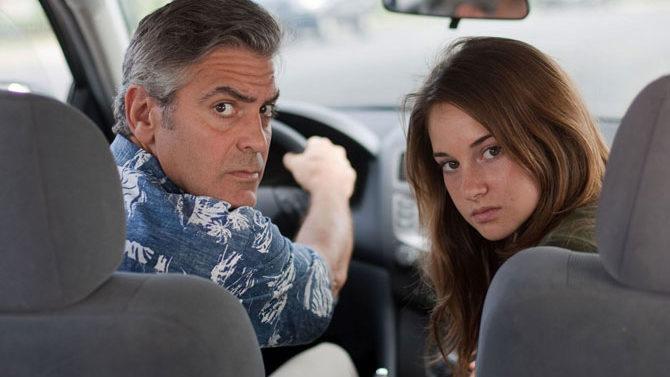 THE DESCENDANTS (R) There’s something perversely satisfying about watching George Clooney squirm in The Descendants. In role after role, Clooney always maintains an air of control and effortless suave that precariously balances between genuine confidence and maddening smugness. No doubt about it, the man looks good in an expensive, hand-tailored suit, his arm wrapped around some svelte model, sipping wine while watching the sunset from his Italian villa. But it’s difficult to suppress the urge to ruffle his salt-and-pepper hair and dunk him into the rarefied waters of Lake Como. You just want to shake him up.

Director Alexander Payne (Sideways) puts Clooney through the paces in his latest work, much in the same way Hitchcock liked to test his best leading men Cary Grant and James Stewart, making them sweat and lose their self-control as they plunged down the narrative rabbit hole. In The Descendants, a rich, middle-aged lawyer, Matt King (Clooney), living the good life in Honolulu, is thrown a serious curveball when his wife, Elizabeth (Patricia Hastie), is seriously injured in a boating accident and wastes away comatose in the hospital. King, who refers to himself as “the backup parent,” is propelled into being the lead parental figure to sassy, foul-mouthed 10-year-old Scottie (Amara Miller) and troubled, headstrong 17-year-old Alexandra (a breakout performance by Shailene Woodley). Between dealing with Elizabeth’s serious medical issues, a major real estate deal King is brokering for his family that will garner everyone involved a significant fortune and trying to keep his daughters from spiraling out of control, King receives another blow when Alexandra informs him that Elizabeth was having an affair and planned on divorcing him. King then goes in search of the other man with the help of his kids and Alexandra’s dim boyfriend Sid (Nick Krause).

Payne has always viewed humanity and our foibles with clear-eyed intelligence. That insight, though, was usually cut with a large dose of dark humor, and there is an emotional aloofness running through his work, as if a little expressive warmth would capsize the equilibrium. The acidic wryness is missing here, though there are still plenty of humorous moments gently nudging through the otherwise grave drama. The tonal balance is impressive throughout, and Payne steers clear of sentimentality when you think he’ll succumb, never bullying us with schmaltz the way James L. Brooks or Cameron Crowe would. A career-best for Clooney and Payne.