From Metal to Manga: Movies to See Around Town This Week 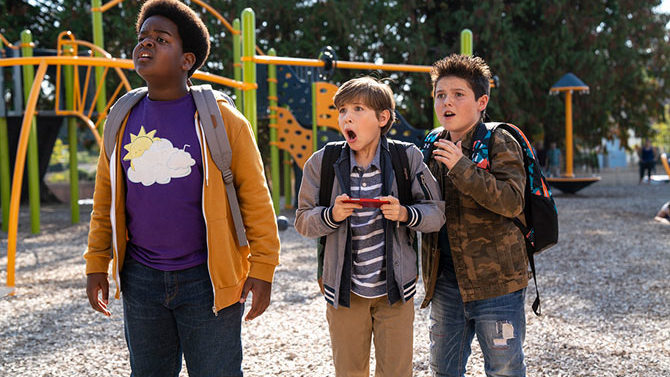 Judging by this week’s wide releases, we are in the dog days of summer cinema. Secret Service agent Mike Banning (Gerard Butler) is framed for attempting to assassinate the president but has his sights set on the real terrorist threat against Air Force One in Angel Has Fallen—can we not call the Fallen franchise a trilogy? The sixth movie from the Kendrick brothers, Overcomer, was mostly filmed in Columbus. Not surprisingly, the film focuses on finding oneself in Jesus. Ready or Not looks a lot like 2011’s You’re Next. A newlywed must play a deadly game of hide and seek with her in-laws. The trailers look fun, and the cast has enough familiar faces, like Andie MacDowell, Adam Brody and Henry Czerny (trust me, you’ll know him when you see him). Who knows if the most promising film of the bunch, Brittany Runs a Marathon, will even open this week? In the dramedy, the hilarious Jillian Bell (“Workaholics” and so much more) finally takes control of her life once she starts running.

At Ciné, you can still catch two documentaries, Toni Morrison: The Pieces I Am and Marianne and Leonard: Words of Love, as well as the best film currently playing in town, The Farewell. On Aug. 22, get your face melted by Murder in the Front Row: The San Francisco Bay Area Thrash Metal Story, featuring interviews with Metallica, Megadeth, Slayer, Anthrax and more. Bad Movie Night returns to Ciné on Aug. 27 for Empire of the Dark.

Flicker has a lot going on this week. Two strange Japanese sports films screen Aug. 21: 2003’s manga-inspired Battlefield Baseball and 2006’s Crab Goalkeeper, which is a pretty literal title. After trivia on Aug. 26, stick around for two Tobe Hooper flicks: his 1981 classic The Funhouse and his 2004 remake of Toolbox Murders, which is, at best, no worse than the original. Honor the memory of fallen replicant Rutger Hauer with a triple feature on Aug. 27. 1986’s The Hitcher paces the bunch, but Blind Fury, featuring Hauer as a blind Vietnam vet, is superior to 1992’s sci-fi serial killer flick, Split Second, which also stars Kim Cattrall.

Southern Brewing Company’s Movies on Tap continues on Aug. 23 with Equilibrium, a sci-fi actioner starring Christian Bale that I barely remember 17 years later. UGA’s Student Activities is promising one of the most popular films of the year for Film on the Fifty on Aug. 22. What will it be?

GOOD BOYS (R) “The Office” writers Gene Stupnitsky and Lee Eisenberg prove pleasantly good-natured in their directorial debut—though only Stupnitsky is credited—which can most easily be defined as Superbad with sixth graders. (Seth Rogen and Evan Goldberg’s production credit should surprise no one.) The always excellent Jacob Tremblay (Room, Wonder) leads three friends (co-stars Keith L. Williams and Brady Noon) who call themselves the Bean Bag Boys on a Hughes-ian adventure across town on a school day.

The running gag about the sexual proclivities of angel-voiced Thor’s parents grows wearisome. Everything else is fun and honest, as the boys try to salvage an invite to their first kissing party. The three leads are equally winsome and not remotely obnoxious; Williams’ obsessive rule follower, Lucas, gets all the most memorable lines and makes the most of them. The comedy quickly quells any fears the trailers spoiled its best bits. These Good Boys get A’s for consistently hilarious effort.

BLINDED BY THE LIGHT (PG-13) So, the music of Queen, Elton John, the Beatles and now the Boss, Bruce Springsteen, have all been the subjects of biopics or cutely creative features. What musical icon is next? (The answer may surprise you: The appropriately titled holiday romance Last Christmas will feature the music of the late George Michael.) Blinded by the Light, based on the memoir of journalist Sarfraz Manzoor, proves that the Boss’ words are universal. When Javed Khan (Viveik Kalra), a working-class Pakistani kid in 1987 England, discovers Springsteen, he is inspired to reach beyond the dreams of his hard-working, traditional father. He even travels to Asbury Park! Naturally, Javed’s American dream (by way of Britain) strains his relationship with his father, but everything works out with contagious exuberance thanks to the Boss’ lyrical wisdom.

Bend It Like Beckham director Gurinder Chadha drives home the anti-immigrant, pro-nationalist parallels of then and now, but makes sure the magical, musical energy of Bruce-meets-Bollywood drowns out the hate and economic strife. Blinded by the Light was born to make you break out your old tape deck.