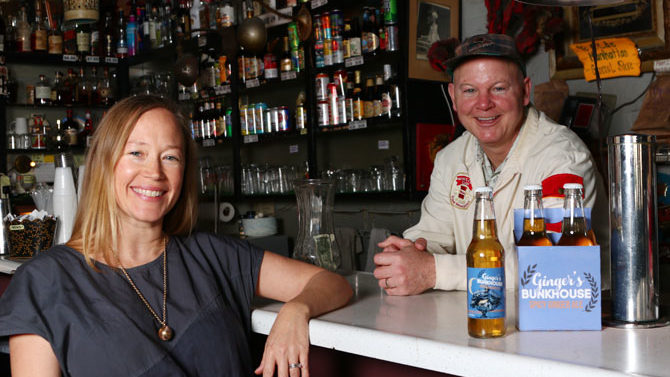 On Mar. 20, over 30 food businesses representing 11 categories will line up along the old brick walls of the depot in downtown Atlanta to showcase their unique homegrown food products at the 2018 Flavor of Georgia Contest. Among the finalists vying for the title are three Athens companies: Bunkhouse Beverages, Bear Hug Honey and Pouch Pies.

Bunkhouse Beverages is a brand new venture from Joey Tatum, co-owner of Manhattan Cafe and Little Kings Shuffle Club. Inspired by Manhattan’s signature Maker’s-and-Blenheim cocktail, Tatum and his wife, Emily, recently began commercially producing their own blend of the soft drink. Submitting Ginger’s Bunkhouse Spicy Ginger Ale to the contest’s beverage category was a bit of a whim.

“I happened to see something about the Flavor of Georgia contest online. I looked and went, ‘Oh, it’s stuff made in Georgia, and there’s a beverage category, and I got a couple sample bottles. I’m going to mail them a couple bottles,’” Tatum says. “Then, about a week later, I got an email saying I’m a finalist.”

That doesn’t mean Tatum doesn’t want to win. He knows that placing in the contest could jump-start his plans for Bunkhouse. “I said, ‘What have we got to lose?’ If we don’t make it, that’s OK, but if we do, this might give us a little boost to get us going,” he says.

And that’s sort of the point. Flavor of Georgia is part competition, part economic development event. Sharon Kane, an economist with UGA’s Center for Agribusiness and Economic Development, has coordinated the contest since 2007. “In the big picture, [the center] serves food and fiber businesses in Georgia, but it was coming up over and over again how food businesses needed new avenues for additional publicity and exposure, so we grew the contest to give all Georgia food products a place to shine,” she says.

Winning the Flavor of Georgia contest can catapult a small business into bigger markets, but just making it to the finals of the contest is a boon. In Atlanta, finalists have the opportunity to present their wares to food industry leaders and network with other food businesses. The judges rotate each year but typically include food brokers, grocery buyers and chefs.

“In the past, when we survey our finalists, they tell us that they benefit by about 11 percent for their revenues on average from being a finalist,” Kane says.

This year’s finalists were selected from a field of more than 125 products. Bear Hug Honey’s Sam Johnson was surprised when his Southern Sriracha Spicy Honey made it into the finals, but he figured he had a shot. “I’ve been experimenting on it a while,” he says. “It’s smoky, it’s sweet, and it’s spicy. It’s got a lot of flavor going on for a honey.”

Johnson would love to see his Sriracha honey on grocery store shelves, but that’s a tough barrier to break through. He hopes someone at the finals will see potential in his honey and help get it out in the market. “It’s not always the easiest doing it from your store, but at a place where so many folks are coming to you because you’re a finalist, it makes it easier to get through a couple doors,” he says.

Local restaurant Pouch Pies is known for meat pies inspired by tastes from around the world, but its Georgia Pie—a Southern take on a chicken pot pie featuring Georgia peach whiskey and tupelo honey BBQ sauce—will be competing in the meats and seafood category. “We love making pies that are full of flavor and push the boundary of the traditional pie. We think we hit the nail on the head with the Georgia Pie,” says co-owner Charmaine Enslin.

Athenians don’t have to go far to sample offerings from Bunkhouse Beverages. Tatum plans to begin serving his spicy ginger ale in his bars and a few others around town in the next few weeks. Bear Hug Honey and Pouch Pies are open for business downtown seven days a week. To take a look at their competitors’ goods, there’s an online directory including products from all the Flavor of Georgia finalists at caes.uga.edu/about/signature-events/flavor-of-georgia/finalists.html.