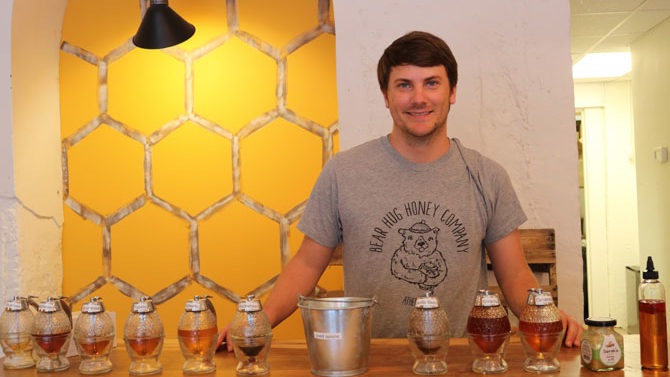 If you find yourself strolling along the block of College Avenue between Subway and Starbucks, you may spot a new face: that of a shaggy unassuming bear, wearing a skull cap and hugging a pot of honey. The bear is welcoming you to Bear Hug Honey Co., Athens’ newest purveyor of local honey and other bee-related products.

Enter the store, and you’ll spot Sam Johnson, Bear Hug’s owner, probably wearing a shirt bearing (no pun intended) the same charming animal etched on the storefront. Johnson is an eight-year veteran of the honey industry and a UGA graduate. After receiving his degree in agricultural and applied economics in 2007, Johnson eventually moved to Savannah, where he began working for the Savannah Bee Co.

“I was interested in local food, in the farmers market, that sort of thing,” he says. “Savannah Bee Co. was connected to that. That’s how I got into it, but then I just fell in love with honey, fell in love with bees.”

Johnson is newly back in Athens, coming from Asheville, NC, where he spent three years helping a honey company get off the ground there. Though Johnson was looking for a reason to move back to Athens, opening a store of his own wasn’t the obvious plan. “I wasn’t sure if this was the right path for me or if [a honey company] would do well Athens,” he said.

When the space most recently occupied by The Mark’s leasing office opened up, Johnson thought it was his opportunity. With keys in pocket, Johnson built out the store in about a month, opening in late August.

Bear Hug is bright and open. Glass jars of honey and honey infusions line the entire wall to the left of the entrance. Johnson carries several varieties of pure honey: orange blossom, buckwheat, sourwood, palmetto and Georgia wildflower. “These will change as the year goes on,” he says. “We’ll run out of some throughout the year, and we’ll pick up other ones when different plants start to bloom.”

Honey infused with Madagascar vanilla and a line of spicy pepper or Sriracha infusions round out the amber-colored array. And of course, there’s tupelo honey, which Johnson says will go fast: “Van Morrison did a lot for the tupelo industry.”

Visitors are welcome to taste any honey at the honey bar in the back of the store. Over 15 varieties of local and international honeys, displayed in decorative honeycombed glass dispensers, line up along a slab of polished wood. Sampling the honeys, says Johnson, is the best way to understand the nuances of regional honey. Like a wine, honey takes on the flavor of the flowers that bloom around the beehive, so the taste and color of honey can vary widely.

The honey bar is Johnson’s favorite spot in the store, because he loves talking honey and educating visitors about the origin and flavors of each variety. “The cool thing about doing the honey tasting is people can really see how different they are,” he says. “We have a lot of people who come in who say they don’t like honey, then [we] get them to try the sourwood or the tupelo, and all of a sudden, they love honey.”

Though honey is the main attraction, Bear Hug offers a variety of products that pay homage to the whole hive. You can find beeswax candles, beeswax-based shaving cream and reusable beeswax cloth for storing food. Johnson also worked with Normal Soap Company to create soaps and lotions infused with honey and wax.

Getting to know other local entrepreneurs, artists and chefs has been a highlight of launching Bear Hug, says Johnson. Soon, he hopes to expand his relationship to more local shops and restaurants, as well as add two new infused honeys to the store.

Johnson has high hopes that honey devotees and honey newbies will find their way to Bear Hug. Tasting one honey can change a mind or it can bring back a memory, he says. “The kind of thing we’re trying to do here is offer an experience, be as educational as possible, but also show how important bees are, as well as the beekeepers, who really are creating an art.”