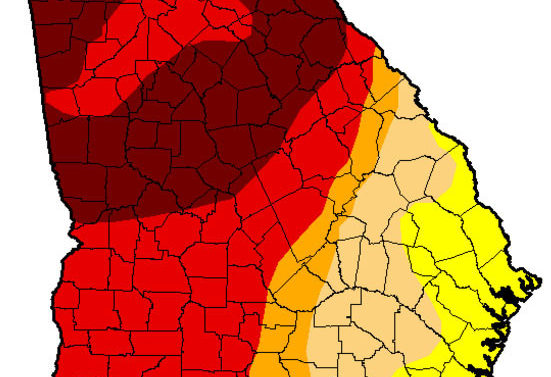 I first visited Jacqui Coburn’s farm in Winterville on a chilly January morning. We were only a few days into the new year, and Coburn was talking me through her winter to-do list: a little bit of harvesting, and a lot of planning for the 2016 growing season.

We walked past large beds blanketed with two-foot-tall oat stalks and thick, leafy winter peas. These cover crops, which protected the soil from shifting around and losing moisture, would soon be cut down and tilled in preparation for planting.

This fall, Coburn’s cover crops aren’t growing. She planted the seeds in October, a month when her farm received just 0.03 inches of rain. After six weeks of using overhead irrigation to help the seeds germinate, “it’s coming up, but really sparsely,” she says.

Athens finally received much-needed rain in late November and early December, but the area is still considered to be in a drought. “All of Clarke and Oconee counties are in a D3 drought, which is an extreme drought,” says Pam Knox, an agricultural economist at the University of Georgia.

Coburn’s fields are irrigated. Two-inch pipelines connected to a well on the farm push 43 gallons of water per minute to drip irrigation heads that line each crop row. Yet despite the ability to get water to her crops, Coburn says the persistent heat we experienced this year is affecting them. “You can tell almost immediately if you get a quarter-inch of rain how much the crops react to that,” she says. “It’s crazy.”

And she can’t compensate for the lack of rain with watering more, because the drip line concentrates water at the roots. Too much water could drown the plants. Still, Coburn says her losses weren’t too bad, considering the conditions.

It’s the cover crops she’s most worried about. Cover crops protect the soil, but once tilled into the bed, they also provide nitrogen and other nutrients planting beds need for a healthy growing season. The rain that Athens is getting now may be too late to help.

The Pastures of Rose Creek’s Will Powers is facing a similar dilemma. The dusty, brown field that sits across the road from the farmhouse is now a common sight on most of his 188 acres of pasture land, he says.

Normally, the first bright green shoots of Winter Rye grass would be peeking out of the dirt. But the soil was too dry and compact for planting earlier this fall. “If you don’t have winter grasses, you’re either feeding hay, or your cows are going to die,” he says.

He drove 101 miles one way to buy 240 bales of hay from a farm in Hephzibah—the nearest farm that had any. Powers dubbed the journey the “Hay Crisis of 2016.” His calves are little on the small side, but overall, “these guys look pretty good,” he says.

Powers says this isn’t the worst drought he has seen on the farm. And he believes his soil, which he has allowed to rest and regain nutrients over the last few years, is set up to make the most out of whatever rain we get. “Things look dry because they are, but when it does rain, we’re set up to succeed,” he says.

Knox expects some relief for farmers over the winter, when Georgia typically sees a lot of rain.

It’s the average temperature creeping up and up each year that concerns Knox. “Even though the annual average precipitation hasn’t changed all that much, the warmer temperatures in the summer make us more likely to go into a drought,” she says. And there’s no reason to think the climate will cool down anytime soon.

If another drought hits the area in 2017, Coburn says Athens may see a reduced variety of produce from local growers. Some vegetables, like broccoli or cauliflower, may take too much time and water to grow during a drought.

Powers says he’s staying optimistic, because that’s what farmers do. “We plan for the worst but hope for the best.”