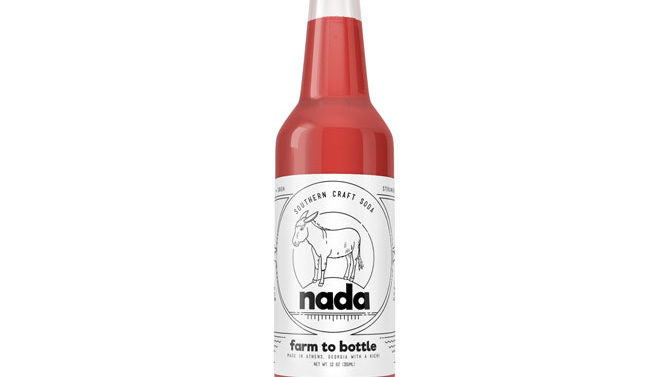 A new craft brew has cropped up in Athens. It’s light, refreshing and has a nice spicy kick at the end. You can find it on tap at Southern Brewing Co.—but we’re not talking about beer. We’re talking about Nada, a strawberry-habanero soda that’s the debut offering from Athens’ first craft soda company, New Creation Soda Works.

Though some restaurants create house sodas, and some beer breweries have added alcoholic sodas to their tap lists, New Creation founders Paul and Carla Kooistra think the market is primed for a revival of quality, non-alcoholic sodas. And they’re probably right.

Craft soda is having a moment. As overall soda sales are declining, the craft soda market is growing. Following in the footsteps of craft beer and artisanal foods before it, craft soda appeals to people who want real food. And the market is still largely untapped. That’s great news for the Kooistras.

“There are a lot of craft soda companies popping up in the Northeast and Midwest, but not a whole lot down here,” says Paul, the brewmaster. The Kooistras moved to the Athens area five years ago with their three daughters. The family has roots in St. Louis, which, far from its reputation for mass-produced lagers, has a vibrant craft beer scene.

In fact, Paul credits his home-brewing buddies for inspiring him. “We thought, what if we can do the same thing without alcohol?” he says. Unlike his friends, who saw brewing as a hobby, Paul saw soda as an opportunity to start a business.

Though Nehi grape soda was Carla’s favorite growing up, she knew New Creation’s sodas had to go beyond traditional flavors to succeed. “We don’t want to do orange, grape,” she says. “It’s got to be different.”

Different is a major selling point for all things “craft.” Though there is no industry definition for craft soda, consumers expect a product that’s made with care, uses natural ingredients and is often produced locally.

In lieu of high fructose corn syrup, the Kooistras use pure cane sugar (and less of it per gram compared to a can of Coke) to sweeten their brews, and they use local, seasonal produce whenever possible. Nada features strawberries picked at Washington Farms, and the habanero peppers come straight out of the family garden. Paul says his sodas are also preservative- and coloring-free. “No red 53, no blue 76 here,” he says.

Flavor experimentation is common, too. The Kooistras looked again to the craft beer world for guidance. “We really want to follow the path of what microbreweries have done [and] create some unbelievably unique flavors,” Paul says. Carla says her husband has an instinct for what flavors will pair well together.

When he was a kid, Paul used to visit his grandfather in Minnesota. He had an old root cellar, remembers Paul, stocked with all kinds of flavors of soda. “That’s kind of stayed with me in the back of my mind, and it’s coming out now,” he says.

Though their early experiments yielded a few duds—the muscadine soda, unfortunately, was too sweet and cloudy—they felt ready to “test the concept” last year at the Watkinsville farmers market, selling soda syrups. They were a hit, especially the strawberry-habanero flavor.

Since then, the Kooistras started selling Nada as a syrup and in bottles and kegs. They’ve found a home for the brew in several local restaurants and bars, including Chops & Hops, Heirloom Cafe, The National and the Rook and Pawn.

Next up is a plumcot-based soda they’ll call Three Pilgrims. It’s set to be released in November. In the meantime, Paul would encourage you to try a Nada with your next taco. Or, Carla suggests a cocktail: “The Nada makes an amazing margarita.”