Organic Certification Is Costly, but Help Is on the Way for Athens Farms 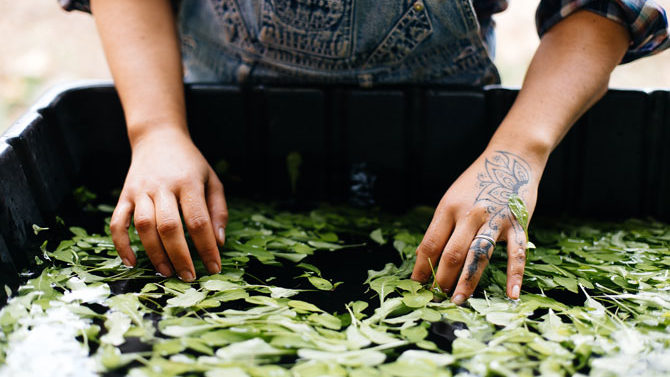 Although agriculture is the leading industry in Georgia, less than one percent of the state’s farms are organic. As of December 2014, there were merely 70 certified organic farms in Georgia. Georgia does have a larger number of Certified Naturally Grown farms—130 to be exact.

There is little reason to embellish on the merits of organic farming practices—sustainability in a world with a growing population, safety from pesticides, and (although they are not necessarily mutually inclusive) people eating organic food are often concerned about eating food that’s in season and locally produced. But all moral factors aside, it cannot be debated that in the organic industry, there is money to be made.

Organic food sales have skyrocketed in recent years, jumping by double digits for the last four. Herein lies the catch. Although organic farming can be remunerative (comparatively speaking), the cost of becoming certified is prohibitive for many. It can range from several hundred to several thousand dollars. In recent years, Georgia farmers were often encouraged to take the less costly Certified Naturally Grown route—developed in 2002 as an alternative to U.S. Department of Agriculture organic certification—if they were concerned with sustainable practices.

In an effort to help Georgia farmers take advantage of the growing organic market, Georgia Organics and the Georgia Department of Agriculture have teamed up to launch the 100 Organic Farms Campaign.

“We want to get 30 new organic farms in the next 18 months,” says Alice Rolls, the executive director of Georgia Organics, a nonprofit that promotes organic food and farming. “That’s an aggressive goal, but we’re going for it.”

By bringing the number of organic farms in the state to 100, Georgia will no longer be in the bottom tier of per capita organic farm production nationwide. This will present an opportunity for the state to grow its organic political infrastructure, gain better means of organic distribution and create more business opportunities for everyone involved.

“It’s an opportunity for Georgia,” says Rolls. “And we want to see this as a means of building bridges with the conventional farming community, too.”

Several farms in the Athens area are poised to take advantage of this opportunity, among them Full Moon Farm, which is currently Certified Naturally Grown.

The line between Certified Naturally Grown and Certified Organic is thin. Many CNG farmers hold themselves to organic standards despite the slightly less stringent requirements of CNG. As in organic farming, synthetic fertilizers, pesticides, herbicides, fungicides and genetically modified seed usage is expressly forbidden for those practicing CNG.

“We have always held ourselves to the same standards as the [National Organic Program], but now we are interested in making it official,” says Full Moon Farms’ Iwalani Farfour. “We feel that our customers recognize the organic certification more readily than the CNG label and are responding to our customers… With this cost-share program, it was a no-brainer for us.”

After hearing about the program, Farfour and her husband, Michael, who also runs the farm, followed up with Georgia Organics to enroll.

The value of the program doesn’t end with the cost-share. Farms like Full Moon will also gain access to training and technical assistance with workshops held throughout the next year, as well as marketing consulting and promotions to help them capitalize on their investment into organic certification.

“We are excited to become certified organic, because of the accountability and transparency it promotes,” Farfour says. “We already follow most of the guidelines required to be certified, but it will encourage us to be better record-keepers. We hope this program encourages other farmers to follow suit, because it is important to us be good stewards of our land and hope others feel the same way.”