For Phickles’ Angie and Phin Tillman, Pickles Are a Phun Business 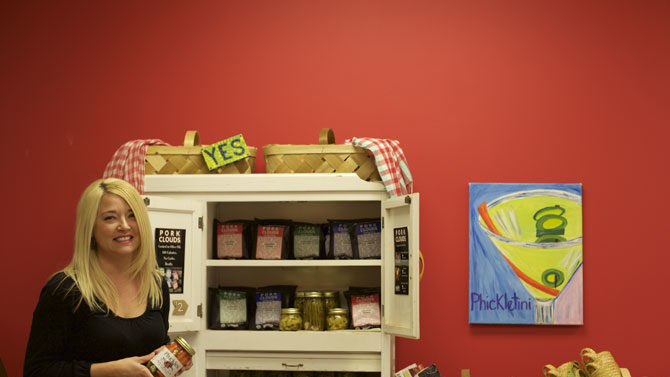 Angie Tillman and her husband, Phin, began Phickles Pickles somewhat haphazardly. Phin made pickles as a tradition for years. He would give them away as Christmas gifts, and they became a widely coveted present. “All of our friends loved them and would steal them out of our pantry,” Angie Tillman says.

Phin was a builder by vocation, and when the market crashed, things got tight for the Tillmans. In hopes of making a little extra money while cash was scarce, Angie started to make and sell pickles. “I thought, ‘Well, I know how to make them, I know the recipe. I’ll just make them and sell them off my porch through Facebook and make a little extra cash,’” she says. “But I was thinking it would be like 20 bucks, just an every now and then kind of thing.”

The porch pickle sales caught on quickly. Angie would announce what she was currently pickling on Facebook, and friends would request as many orders as she made. She’d leave the cans with a name tag and a cigar box to deposit their payment on the porch of their house.

Before they knew it, the couple was selling pickles in shops throughout the Southeast. They made a decision to sell exclusively to locally owned businesses, even if it meant sacrificing what could be a more lucrative mass production.

Rather than go big, Angie and Phin enjoy the relationships they’ve made and the trips they take to fulfill orders in cities and small towns throughout the region. “It’s crazy, but it’s fun,” says Angie. “We have some of the best memories. You try to fit as much as you can into that day.”

From the beginning, the Tillmans always prioritized sourcing their pickles as sustainably as the demand allows. “We pick up from farmers at the farmers markets we are members of and contract with farmers in our area when in season, and then during the off season we source from as close as possible,” she says. “We buy organic when possible and always certified naturally grown.”

Angie and Phin’s story began with pickles. The pair met at the bank Angie worked at in downtown Athens. When Angie arrived at Phin’s house for their first date, he welcomed her with the first beer she’d ever had and a pickle he’d made himself. About a year and a half later, they were married.

Angie admits that running a business with your spouse can be challenging at times, but she’s grateful for how far they’ve come together, operating under the mantra, “If it ain’t phun, don’t do it.”

Currently, the Tillmans are producing the pickles from a warehouse space on Atlanta Highway, but they are preparing to move much of their business to their store on Baxter Street. “I’m hoping I’m going to be able to carry all the things that I’ve talked about on Facebook for years,” Angie says, surveying items from all over the Southeast that are displayed in her new Phickles storefront. “I can tell a story about every product, because I know the people who make them.”

Knowing that Athens is a transient place with students coming in from all over each year, she hopes she will gain their business by carrying hometown favorites like Red Clay Hot Sauce from Charleston, SC, Bacon’s Heir Pork Clouds from Atlanta and Bourbon Barrel Foods from Louisville, KY.

Angie also wants to avoid taking business away from Athens stores that carry Phickles. “I think in here, they are going to cost more unless you buy in bulk,” she says. “So I want people to come here as a place to stock up.”

The Tillmans are also preparing to launch a line of cheese spreads—one is called Hot Mess, and the other is known as Southern Charm. The cheese spreads will be available in the store with other snacks and salads. “I really kind of want to make my life easier,” Angie says. She’s hopeful that the storefront will enable her to continue building the relationships that have been a major contributor to their success with a little more consistency and a little less travel.