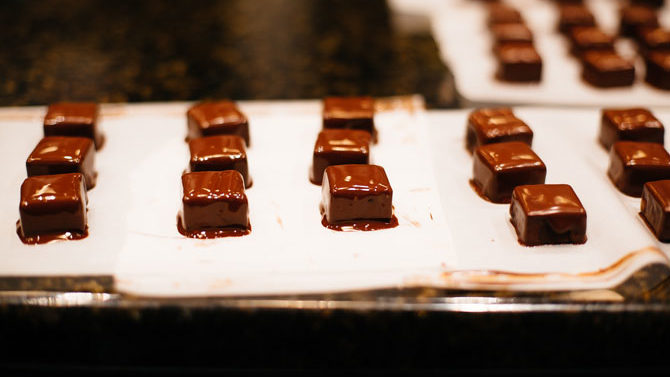 Chef and restaurateur Peter Dale’s latest venture, Condor Chocolates, is a family affair. He and his brother Nick were inspired to open up Athens’ first specialty chocolate shop by lifetimes of taking regular trips to their mother’s native country of Ecuador.

“We would go to Ecuador to visit family and would want to bring back gifts for people,” Peter says. “I’ve always loved their chocolate, and they grow a lot of cacao, so it was a natural to want to bring back chocolates as gifts. Several years ago, I had a really hard time finding a nice Ecuadorian cacao that was of high quality and packaged nicely. That had been on my mind for a long time, and actually in the years since then.”

In the time that he considered the gap in high quality Ecuadorian chocolate production, Peter also noticed the changes in the country’s cacao industry. More cacao is grown in Ecuador than anywhere else in the Americas, and the country recently overtook Brazil as the South American cacao industry’s leader. But most of what’s grown gets mixed from various growers and goes straight to big producers of commodities like Nestle chocolate products. As Ecuadorian cacao production has flourished, it’s begun to diversify.

“There is starting to be a movement where smaller operations are growing things in a more thoughtful way,” Peter says. “Instead of it going into the commodity market to become a blend with all the other beans from Ecuador, they’re focusing on organic farming practices and single-origin sourcing.”

Once the brothers determined that they were going to begin a chocolate operation, their father helped lay the groundwork for their relationships with growers in Ecuador. The Dale parents spend half of each year there, making it an easy trip for the brothers. It was important that they meet their growers face-to-face and search carefully for the right beans.

“Chocolate’s a lot like coffee or wine, meaning that there’s definitely a flavor profile that you can find throughout Ecuadorian cacao, but depending on the province and the weather and the soil conditions and all that stuff, there’s variations,” Peter says. “So even though it’s the same bean grown throughout the country, there’s really a lot of nuances.”

The Dales hope to highlight these nuances in chocolate to come. They’ll also be using the chocolate to feature local products. The first chocolate bar they’ve produced is made of milk chocolate with Georgia pecans, and it has flown off the shelves already. As they perfect their process and grow, Condor Chocolates will have more bars, new truffles, other products like gelato in the summer and hazelnut chocolate spread this week.

Among the ingredients they’re excited to feature is merken, a smoked chili pepper from Chile. “Our dad was in the Peace Corps in southern Chile, and he lived with a tribe of Native Americans. They’re the ones who make that chili,” Peter says. “And so while it’s not Ecuadorian and it’s not from Georgia, it’s certainly part of our family story.”

Although the brothers had never worked together professionally, they’ve found now that they make a great team. Nick brings to the table experience and a love of making chocolates and a proficiency with the kind of machines involved in making the chocolate. Peter adds his creative culinary sense and years of running restaurants.

The Dale brothers opened up Condor Chocolates in the last days of the Christmas shopping hustle, just in time to make it into stockings across Athens and elsewhere. As they get established, they’re hopeful for what their chocolate endeavors can do for the Athens food scene at large—that perhaps it could serve an ambassadorial role for what Athens food has to offer.

“I think the food scene in Athens has grown so much, but typically it requires someone to come to Athens. This is an Athens food product that is easily transported, and we can take what’s going on in Athens’ food scene to other places, to people who aren’t in Athens,” says Peter. “With Creature Comforts beer and Terrapin beer, there are starting to be food manufacturers that could take the idea of what’s going on here and export it, and it’s cool to be a part of that avenue.”