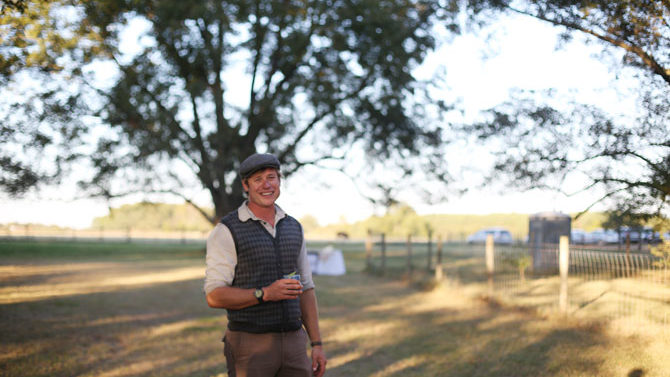 The Pastures of Rose Creek farm in Watkinsville has been a family farm for four generations. Now run by Will Powers and his sister Francie, the farm that was once worked by their great-grandfather is now home to 100 grass-fed cows and 150 free-ranging chickens.

Will and Francie began farming in January 2011. Will had just returned home from working as a raft guide in Colorado. He came home to begin something bigger, to contribute to an effort that was stitched into his very DNA.

Will’s task was just as physical as his adventures out West, if not more. He began spending his days dedicated to a garden, working hard to grow, following Certified Naturally Grown practices in the heat-and-insect-ridden morass that is inescapable in the South.

“I really didn’t enjoy going out at three in the morning and weeding, because it’s too hot at 12 in the afternoon,” says Will, whose emphasis has now shifted to the cows and chickens he grows on the land. “But two years later, we had beef to sell, and it really made a difference on the turnaround of what we were deciding to do.”

I could have had an easy, carefree life, but this is the bigger picture.

When Will and Francie began raising cattle, it was something of an experiment. In generations past, the land had been a dairy farm. They learned quickly by way of trial and error, as well as from friendly farmers in the area who were willing to share a little wisdom.

With the first hundred head of cattle, he practiced herding them from one portion of their 180 acres of pasture to another. He has perfected this process, developing a system that he now likens to using his land like a person would eat pizza. He keeps the cows in one slice of the pastures at a time and rotates them after they’ve essentially depleted the grass in that area. The cows are limited to those acres (but still given substantial space to roam) by temporary electrified fences that he moves with the herd. This allows each “slice” of grassy pasture to recover as the cows are moved from one section to the next.

Will and Francie work tirelessly to make sure that their cows are given the best possible treatment. “I spoil these cows,” Will says, “they are spoiled rotten. The worst part of their lives is the trailer to the [slaughter], and that’s the hardest part of my job, too.”

Will and Francie made their process more holistic by bringing in chickens. The chickens rotate behind the cows to clean up after them, scraping the piles of cow pies and eating the bugs that could otherwise wreak havoc on the cows. It’s a delicate process, because to put the chickens behind the cows too soon would allow them to eat the bugs that the soil needs, like dung beetles. Typically, the chickens are moved into a pasture three days after the cattle have moved over. This prevents the Powers from having to use chemical insecticides. It’s ultimately beneficial to the chickens, the cows and the consumers of the Pastures of Rose Creek products.

“In order to get those orange yolks, like you guys want and like we would like more of because we only have so many eggs now, [the chickens] have to free range,” Will says. “You can’t put them in a pen. They have to go around and eat the bugs in order to get the nutrients to produce the yolks like that.”

After years of intensive work and occasional harsh realities alongside daily victories, life at The Pastures of Rose Creek is systematic. Their output is growing. The farm now sells its cattle, eggs and produce not only to restaurants, at the Athens Farmers Market, the Oconee Farmers Market and at their Sunday farm stand, but now they are also offering the option to buy their beef in bulk. Family packs that contains a chuck roast, a sirloin, New York strips, cube steak and ground beef can be reserved via email (pastures1051@gmail.com). For those with less space in their freezers, a smaller pre-selected grouping of their favorite cuts, priced to save bulk shoppers $1 per pound, is also available.

“I could have had an easy, carefree life, but this is the bigger picture,” Will says. “This is more than me, this the whole family and everybody involved here. Sometimes you gotta think past yourself. And I get to be outside, so I can’t ask for more than that.”