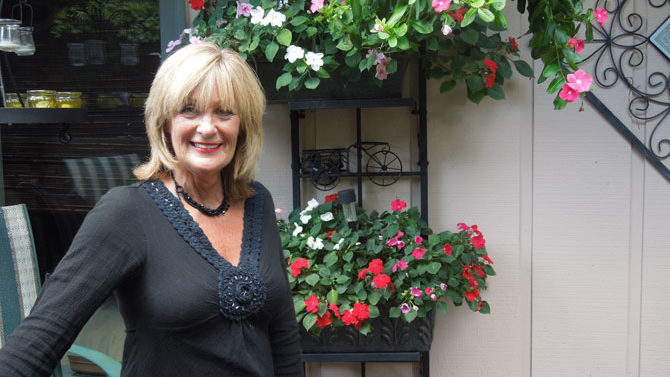 When I first met Jo, she talked a lot about psychics and destiny. I’ve always been a skeptic, but after talking to Jo, I believe in magic a little more, even if only slightly. She truly believes in destiny. In fact, she says that finding the two most important things in her life—her husband Tom and her dog Bailey—was destiny. But destiny also brought a great deal of change for this French-Canadian.

Flagpole: You said you moved from Montreal? How long have you been in Athens?

FP: What did you notice about Athens coming from Montreal?

JRG: Well, it was like a culture shock for me. Also, it was very different because there were no French people around me [laughs]. I was surprised with some of the racism here. In Montreal, we have so many people from all over the world that nobody really judge(s) that. But in Montreal, it’s a bit different. You have communities. The Italians stick together, the Jewish people stick together. You have the Greek people, the Chinese, they all have their little town…

The heat. I know in Montreal it could be humid and really bad, but it doesn’t last. I miss my winters. I miss snow. I miss seasons. I find the seasons here are not defined as Canada. I miss the culture; it’s not the same thing. I’m sorry to say your food is not as good. But I’ve been to Paris, and you know what, Paris was the worst place I ever ate in my life. People say to me, “Oh, it’s the best place.” No. Me, when I order a chicken, and I got the [feathers] on it, still on it when you eat, is just gross…

FP: Have you had an enjoyable dining experience here?

JRG: There’s one place that I ate very well, and they were just appetizers. It was upstairs. Speakeasy, it was called. That, I really enjoyed. Me, I’m used to (being) around the table and (eating), not because I’m a pig, I’m not fat, but eat slow, taste different things, have a glass of wine. That, I was brought up that way—we eat around the table, and we stay there all night. Here I find everything is fast, fast, fast. I find even if its the South, it’s supposed to be slower. In Montreal it’s really fast, but at home, for me, it’s different. Like when I go to Maine [for family reunions], we’re 30 people, we have dinner around eight and it lasts until 12. I was brought up like this—around a table. That was a time, for me anyway, with my family to talk, to open up and [talk about] what we did during the day. And that was important to us… Another thing, in Quebec, we have, once a year, a little event, during the wintertime in March, when there is still snow, but it’s not too cold outside. It’s called “sugaring off.” The whole family, everyone, we go to the, uh, cabane à sucre—the sugaring place. It’s like a shack, some of them (are) very commercial, but to my experience, I don’t like the commercial one because the food is not as good. So, we go to a private one. A person will cook for you and your family and will have you and treat you as their children. Everything is homemade in front of us; they cook it and everything is made with maple syrup. So, it’s like bacon with maple syrup and the eggs with maple syrup and sugar pie. It happens once a year. It’s very sweet—you feel a bit sicky at the end, but it’s all worth it, it’s all good. You don’t eat for two days after. But at the end of it, they put some hot maple syrup in the snow, white snow and very clean, and you take a popsicle stick and you roll it, and you eat it like toffee. [She gestures as though she’s make one of the treats and eating it]. La tire, it means a pull. We used to make tire at home. We used to twist it and make little toffee candies. [She gestures again and makes a stretching sound effect].

FP: What did you do when you lived in Montreal?

JRG: I was working at Merck Frosst in Medical Affairs for the last four years. I didn’t have my permanency, I was temporary, but temporary doesn’t mean you work two days a week. You work five days a week. What it means is you didn’t have the benefits. The day I found out that my husband was transferred here for Carrier Transicold, that’s the day they told me at Merck that I had my permanency with benefits. Also, salary here, very low, very low, very low. Minimum wage in Canada, I think, is 10 or 11 [dollars] an hour. You don’t work for five an hour, sorry. I had a super-good salary, even temporary was 22 an hour. And when they give you full-time, it’s like 35 an hour. So, when I arrived here and wanted to work, I was paid 8 an hour, and it felt like an insult to me.

FP: Where did you work when you got here?

JRG: It took me a few  years before I could work with my work permit, so I worked for McWaters. I did the working for charity, how do you say that, for free.

JRG: Volunteering. But also, I was painting, and I taught some painting lessons here at home. And I taught French to some English students at the university here.

FP: And you mentioned you make jewelry.

JRG: I make jewelry, and I sell it. I sell in Maine. The hotel I go—it’s a sweet little hotel—it’s not the big high-rise; it’s two floors. The people are so nice, and they take my jewelry in the summertime, and they sell them for me. And also my sister sells them in Montreal. And they have a festival every weekend in Sherbrooke, and there’s merchants who make things by hand, and she sells them during the summertime.

FP: So, you feel like there are a lot of differences between here and Montreal?

JRG: Yes. I notice too, another thing, people decorate [for Christmas] early here, Thanksgiving. Thanksgiving in Montreal is not as big as here, not as big at all. But people start decorating early, but they take it out early. Us, it will stay until Easter. I had a Christmas tree until Easter. It was dying, but… The Catholic people, we never take down a tree before la fête des Rois—the King’s birthday, which is on the 7th of January… But honestly, I love America. I married an American. I met my [current] husband Tom here—the love of my life—and we got married. So, yeah, I love the U.S. It was destiny for me to come here and meet Tom. I really believe that.