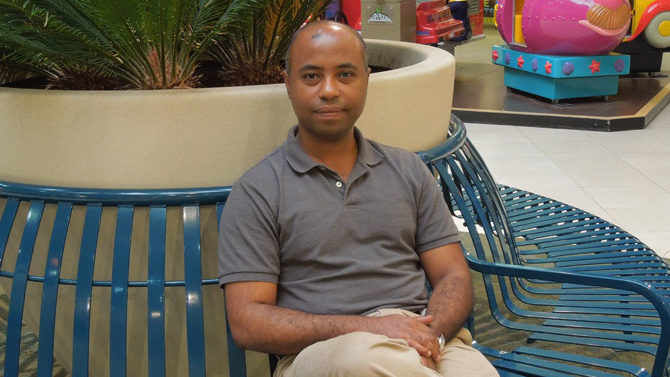 Strolling through the mall, you’re sure to see at least a few husbands perched on strategically placed benches and waiting for their wives to finish shopping. My former women’s studies professors would cringe at my conjecture—that I assumed Aemro Kassa was doing just that when I approached him. Actually, this Harvard-trained virologist, biochemist and former veterinarian from Ethiopia was just waiting for a vest from the tuxedo rental shop for a destination wedding in the Dominican Republic.

Flagpole: You said you came from Boston and you are working here now?

Aemro Kassa: Yeah, I’m working here now. I work for a company called Merial here. I work there as a senior scientist.

FP: What are you studying there?

AK: Well, the company Merial actually is one of the major pharma-biotech companies producing medicines for veterinary care. So, we produce different kinds of drugs and vaccines for pigs and large animals, every kind of animal, actually. So, it’s pretty much one of the major players in veterinary pharmacology and the industry in vaccines. I work in the vaccine part, and that’s what I do.

FP: What kind of schooling do you have?

AK: I did my Ph.D. I did my Ph.D. in Harvard in Boston in virology and viruses and protein biochemistry. And then I worked for different companies while I was in Boston. Now I’ve moved to a new place and have a new, different job.

FP: How long had you lived in Boston then?

FP: You mentioned you were going to a wedding in the Dominican Republic, are you from there?

AK: No, I’m not from there, actually. My brother-in-law is going to be wedded to his wife, and they are actually from Ethiopia, and I am from Ethiopia originally. Well, they have got a destination wedding, so they wanted to go there, and we’re all going there… I’ve never been in the Caribbean. I’ve heard good things about it, so I’m looking forward to do some beach-walking and stuff like that.

FP: Where is Merial located?

FP: OK. I honestly haven’t heard about it before.

AK: I mean probably not, it’s not… I mean, it’s a very big company; probably it’s got more than 5,000 employees. You know, we’ve got sites in France and here in America we’ve got multiple sites. One is here, and another in Duluth and multiple other sites, and it’s a very international company, so it’s pretty much located in all continents.

FP: So, you studied viruses and protein biochemistry. Were you interested in getting into the veterinary side of that?

AK: Well, actually, I am originally a veterinarian so back home in Ethiopia, my first degree actually was D.V.M, Doctor of Veterinary Medicine, so I was a veterinarian by training, but then moved to more scientific stuff. So, instead of the clinical stuff, I was working [with] more of the science, but for me this is like completing the circle, coming back to the veterinary field but now as a scientist instead of a veterinarian to the animals.

FP: Yeah, interesting. And this happened by chance or were you looking to go back to that field?

AK: This happened by chance. I mean I was working in other companies, so I was not particularly looking for it, but when the chance appeared that there was a possibility of working here, I definitely was interested.

FP: And how long did you practice as a veterinarian?

AK: Not for that long. I practiced it when I was back home, probably not more than a year or two.

AK: Yeah. June, like the last week of June.

FP: Had you come down to visit before you decided to move?

AK: Yeah. I had to come here for the interview and visit before we decided to come. I’ve got a wife and a son, so I wanted to make sure…

FP: OK, so you relocated your whole family here? I guess how are you and your family adjusting?

AK: So far, great actually. I love the… Athens is a beautiful city. I mean, I lived most of the time in Boston which is a big city—very crowded, there’s lots of hustle and bustle, you know; driving to and from work is kind of a hassle with the traffic and stuff. Here there’s no traffic problem, the streets are cleaner, the people are nicer compared to the northern ones, you know. So, I really like it; I’m enjoying it.

FP: And how old is your son?

AK: He is two years old.

FP: Oh, wow. So, I was going to ask about, like, schools or something, but…

AK: Yeah, he’s adjusting very well. He’s in a daycare now, and he enjoys it.

AK: Yeah, exactly. He’s not in high school or something; we don’t have to worry at this point.

FP: So, what do you and your wife do in your spare time?

AK: In our spare time? I mean, pretty much, it’s only been a month, so we did not have much spare time because, you know, we were moving our stuff, preparing our home and stuff like that. What else? I mean, we have got family members coming here, so we have been entertaining them, whenever we can. That has been most of the stuff. We like to go to Barnes and Noble with our son and read books with him; sometimes go to the park, walk around or play ball. That’s pretty much it so far.

FP: Have you been downtown at all?

AK: Yeah, I have been. The only problem is that we could not go there as a family because my son is extremely mobile, and there’s no way of… having a decent meal or decent drink with him. So, we haven’t been able to go there, but I went there with friends of mine, you know, to sample some of the nice beers around here and good food around here. Yeah, I’ve been there a couple of times.

FP: Your wife, does she work?

AK: Well, she’s not working now. But she’s looking for a job. She’s a nurse, so…

AK: I hope so, yeah, I hope so. She started looking pretty much very recently because we have had lots of stuff… moving and making sure we are settling down well. From changing the car license plates and all of that—it takes lots of time—so she has been doing that, but hopefully she’s going to start soon.