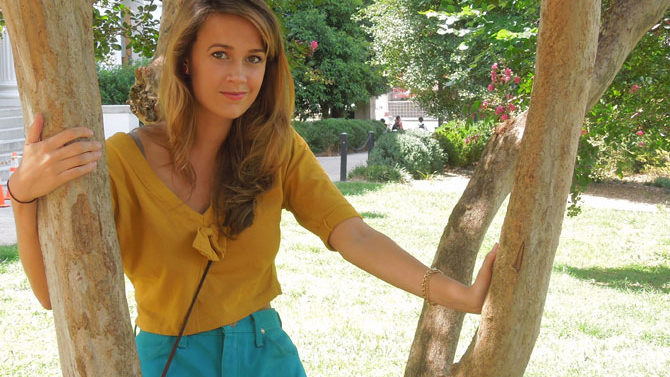 In a few days, Liz Larson will join the numerous recent college graduates who are trying to break into an unwelcoming job market. While she’s nervous about life after graduation, she’s not trying to get a typical office job; she wants to be her own boss.

Flagpole: You live here in Athens…

FP: That’s exciting. What class are you taking?

LL: The politics of development. It’s an international affairs class.

FP: And are you excited about graduating?

LL: I mean, it’s momentous, and that’s great, but it’s also a really scary time to be entering a non-existent job market as a young adult, so that’s pretty nerve-wracking.

FP: So, what do you think you’ll be doing after you graduate?

LL: I really want to develop my own online company. I actually just signed a lease to stay here in Athens, and even though it might make more sense to live at home, and I could probably save more money that way, I just, like, can’t get my head around moving back in with my parents. And there’s so many creative people here. If that’s what you’re looking for, and you cannot fall into the dark side, right?—the night scene—then I think this is a great environment for a young person with a creative project.

FP: So, what kind of online business are you thinking about?

LL: I want to help people develop their own personal style in a way that makes sense economically, and I want to use an online platform to do that.

FP: What made you think of that idea?

LL: Well, it’s definitely an idea I’ve been developing for a long time… It’s almost not fair how much your presentation matters to people. And it’s almost like a necessary evil. So, I want to help… I’ve always been able to put things together in a way that might look like I spent more money or more time than I did just by organizing and reworking old things and knowing where to shop and how to shop and just taking the time to think about my lifestyle and what makes sense for me—like where the holes in my wardrobe are—instead of just going out and buying whatever certain brands tells you are gonna make you feel relevant. So, I really want to help other people be able to do that. And especially in this kind of economy, so many people are going out into a tough job market, I want to help people get the confidence to spend their money efficiently.

FP: So, you’re kind of putting the international affairs stuff on the back burner for now?

LL: You know, I want to get my head straight and give this creative project some time. Like, I feel like I did the responsible thing. I came out with practical majors, in four years, in things that are employable. But I also know this is a time in your life that you can afford to take a risk, and I’d like to give myself that chance.

FP: So, you like to travel. Did you study abroad or anything?

LL: Yeah, I did the UGA in España, the Valencia program… Valencia is absolutely gorgeous but, I don’t know, I feel like a lot of people kind of romanticize their study abroad trips. Parts of it were a little bit lonely in some ways, but it really does force you to grow up a lot as a person, so I think it’s important. I would recommend it for anyone.

FP: Have you been other places abroad, too?

LL: Besides Europe, I’ve been to Israel, Costa Rica and the Bahamas.

FP: Israel, why did you go to Israel?

LL: I went on a birthright trip… The architecture there is just absolutely stunning… It’s really interesting to see the way these architects captured fitting in with what was. I don’t know, it doesn’t look anything like Disneyland, like fakey, fakey. The new construction isn’t trying to be ancient. It’s contemporary, but it fits so well, and it’s so beautiful.

FP: And you were just visiting [Costa Rica] for fun. Was it a vacation?

LL: Yeah, my dad works down there. He takes group adventure tours, like deep-sea fishing and zip-lining and hiking through the rainforest, so…

FP: Cool, how did he get started in that?

LL: He’s a fisherman. It’s almost like a religious devotion to what he loves. One of his friends that he fishes with owns the company, and I think also because fishing is a part of the service they’re offering… I mean, he loves it. It’s a dream job.

FP: And so you’ve gone zip-lining and all that?

LL: Yeah, I think zip-lining is better than any amusement park ride ever, especially if you have any interest in ecology. You’re just soaring through the trees. It’s insane.

FP: Were you scared?

LL: No, I mean it’s exhilarating, but…

FP: You trusted your dad?

LL: Yeah, it doesn’t feel unsafe, though. I mean, I’ve freaked out on roller coasters. I’ll force myself to do it, I don’t know why. It’s, like, kind of sick almost. But I’ll make myself do them and hate every single second of it. It wasn’t like that. It was just amazing.

FP: Do you have any other interests?

LL: I love reading, and I love writing.

LL: No, I usually [write] commentary or, like, a new way of looking at everyday things, which I guess is kind of like the business that I want to start.

FP: So, do you write for yourself, or do you blog or something?

LL: I’ve been writing a journal that’s just for myself, but with the intention of maybe using it for a blog at some point. I’m just, I don’t know, trying to, like, develop my voice a little more before I start putting it out there. But it’s definitely cathartic. And then I also, I’ve done stand-up [comedy] before, and so that’s a lot of fun to write.

LL: I mean, I would say overall it was a success, but it’s really nerve-wracking. Like, I’ve done theater and I’ve done chorus—sang a solo—but there is nothing more nerve-wracking than stand-up. Well, because, think about it, let’s say you’re in Footloose. Everyone knows Footloose is corny, you know. So, if someone goes to see Footloose and they don’t like it, it’s like “OK, well, you knew exactly what you were getting into.” But, if someone goes to your stand-up and they don’t like it, it’s more personal. They went wanting to see your fresh, new writing and to see your sense of humor. That makes you really vulnerable.

FP: So, what [topics] does your comedy focus on?

FP: Are you interested at all in doing that more?

LL: I don’t know. I kind of took a hiatus because I felt really embarrassed about talking about something. I felt, like, almost overexposed in a way. But I miss it. It’s nice to have people interested in what you’re doing in a way that shows that you’re creative. That’s one thing about being in Athens: everybody contributes… I like being able to contribute, too, and I think you can appreciate others’ work more when you’ve got something going for yourself.

Stop whatever you’re doing and listen to Bill Doss’ music