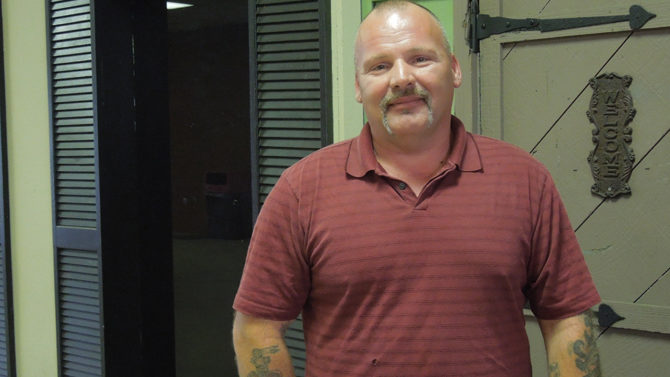 I went to The Office Lounge off Jefferson Road for the first time a few months ago. I left the bar, which is located in the Homewood Village Shopping Center alongside a drug store and a Mexican restaurant, and made a mental note to return for an interview. This week, I chatted with Brent Haley, a carpenter who has lived in Athens since high school and has built or renovated some familiar downtown locales.

Flagpole: Have you always lived in Athens?

Brent Haley: Almost all my life, since high school. [I went to] Madison County High School.

BH: I’m actually a handyman/carpenter. I got laid off in 2008 and I couldn’t find a regular job, so now I pretty much self-contract out myself.

BH:  Yes, I was: Keith Porter Fireplace. I was the manager at Lake Oconee… I sold, installed and serviced fireplaces.

FP: And, so it was kind of a reasonable change to go into…

BH: Because of my background history and working around houses, it wasn’t hard to pick up. My latest remodel downtown was… Helix on Clayton Street. Then they just put in fab’ rik the dress store next door. I had to prepare some stuff so they could come in and get ready to open their store.

FP: OK, so you have done some renovations around town.

BH: Yes, ma’am. The Navy School back in 2004. I was a foreman on that job for two-and-a-half years redoing the fitness center there… The transit center downtown, I was also the foreman on that one, and that was a pretty good job also.

FP: As foreman on a job, what all are you involved in?

BH: You oversee different laborers. Athens, they do use a lot of day laborers, such as Labor Finders and stuff. So, you oversee, depending on the size of the job, I was overseeing 15–20 laborers at a time, your sub-contractors, local builders, you know, you got your plumbers, electricians, stuff like that.

FP: So, you generally oversee the project.

BH: Oversee them, do daily reports on the progress, stuff like that. SPLOST was the fund director of the transit center, so there they really wanted to keep account of everything, so the man-hours and stuff was all kept track of. The Navy School certified payroll, so actually everybody there got paid through Labor Finders, even though they worked for different companies on the project, it had to be certified labor.

FP: Immigration issues have been in the news a lot, and when you think of construction and you think of day laborers, you also think of people who maybe don’t have papers…

BH: My main concern on that is: have papers. If you haven’t got papers, you can’t be insured. It’s not fair to the other workers that are paying taxes. It doesn’t matter if you’re Hispanic, or whatever, you deserve the same job everybody else does, you just have to be legal. And I say that with my own son-in-law just getting legal in Arizona, and my grandchild is half Mexican, so there’s no bias coming from that. You need to be legal, even my own son-in-law [laughs]. So, yeah.

FP: So, your son-in-law is from Mexico.

BH: He’s been fighting for it. Because of all the laws and stuff, it’s been very hard. He just now has got a pass for one year, as long as he keeps his nose clean and continues to work. He’s always worked; he’s always been a good provider. He can do it legally, in one year, if he can become legal.

FP: And so he lives in Arizona…

BH: Yes, and that’s the hot-point for all this anyway, so it’s really great that he’s getting that. He’s a hard-working man; he’s been great to my grandchild; he’s good to my daughter. [I have] no complaints.

FP: So, now since 2008 when you transitioned to [self]-contracting…

BH: Right. I mean, the other day down at the Delta house, I went over for the guy that’s moving into the dorms. They’ve got small dorms and they’ve got, like, loft beds. This one wanted a flat-screen [TV] mounted on his wall and his loft modified and that, so I do a little bit of everything. It’s whatever the need’s there for. There’s not enough carpenter work for somebody to work for a full day every day of the week, so you’ve got to be able to diversify… Word of mouth keeps me busy. Once somebody finds out you do work, you’re honest, and you’re willing to give a good day’s work for a day’s pay, it don’t take much to stay busy. I have stayed busy [by] word of mouth.

FP: When you aren’t out doing carpentry, what are you doing?

BH: Normally, I’ve got my dog, and we’re at the river [laughs]… I’ve got a little Boston terrier. She’s three years old and she loves going out to The Sandbar in Madison; [I] let her run and play.

FP: What do you like about this spot [The Office Lounge]?

BH: People know me [laughs]. It’s small enough people know who you are.

FP: It’s kind of got that Cheers feeling.

BH: Right, sort of, yeah. The rest of Athens, like the bars downtown, they’re all right, they’ve got some great music. But, really, it’s hard to meet people or talk… or make a friend or something. It’s just overwhelming… I prefer having one or two beers, talk to a few friends and come home.

FP: You’ve been living in Athens for a few years now…

FP: So, 25 years. How has Athens changed over the years?

BH: Athens has changed a lot, downtown especially. The biggest thing I miss about Athens: [it] used to be closer-knit. And now, downtown, it seems like someone’s always fighting over this and that for some reason down there. I remember in the late ’70s, as a kid, on the end of Broad Street watching three tornados come across Athens. And the little shed—it’s actually still there—was my grandfather’s garage. Between the new transit center and the condos there’s a little blue building, metal building, that was my grandfather’s building. I was sitting in that shop watching the tornadoes come across Athens.

FP: What happened? I’ve actually never heard about that.

BH: One of them actually come down Prince right here. And one of them tore up; it used to be Sand City trailer park right off of Commerce, but it don’t even exist anymore. It tore up a couple trailer parks and come through town and tore up lots of stuff. There’s houses on Prince Avenue that were just picked up and set back down.