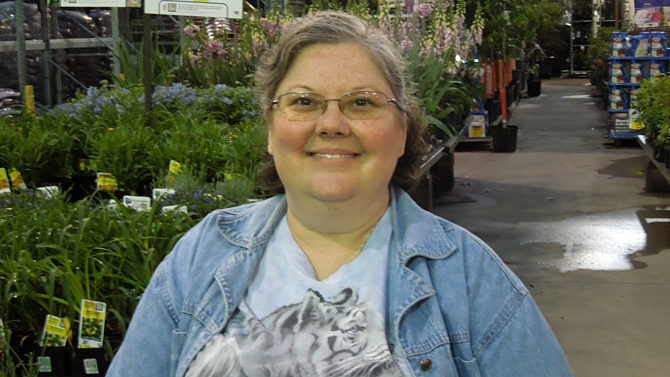 One weeknight, I was in the gardening section at a nearby home improvement store when I asked Carla Parr for an interview. Well, actually I asked her husband, who had sort of wandered off while Carla was asking questions about the plants. He directed me to her.

Carla worked as a special education teacher until she was diagnosed with rheumatoid arthritis. We talked about her love of children and teaching, as well as her adjustment to a new lifestyle.

Flagpole: How long have you lived in Athens?

Carla Parr: Since 1988. I came down here from Indiana.

FP: That’s quite a move. What brought you here?

CP: Jobs. There were no jobs in Indiana.

FP: What job did you end up getting down here?

CP: I worked in Athens Regional emergency room as a tech when I first was here, for three-and-a-half years. And then I had my own child care [center] for three or four years. And then I wanted to get into the school system, and I had to start off as a substitute teacher working in the lunchroom. From there, I went back to school and finished my bachelor’s degree in education, for middle grades. And then, a year after I started teaching, I went back again for my master’s in special education. I got a job teaching special ed kids, and I wanted to stay in that position. In order to do that, I had to get certified in it.

CP: No, no. As you can see, I’m disabled. [Carla is sitting in a motorized chair.]

FP: So, do you still work some or are you on disability?

CP: I’m on disability. Mainly, all I can do is things around the house… I have rheumatoid arthritis and I’m on a medicine, or was on it until I got sick, but I’ve been on medicine that blocks the immune system, keeps it from working, because that’s what attacks the joints in rheumatoid arthritis. And on that medicine, I ended up sick; I was catching every infection that came through the school. I stayed sick all year that last year I taught. So, I had to quit and stay home and stay away from the germs as much as possible.

FP: When did you find out that you had rheumatoid arthritis?

CP: In January 2006… I didn’t know how long I was going to be able to work. That frustrated me, because I didn’t know what I was going to be able to do financially if I wasn’t able to work. But it worked out well with the school system, being retired on disability… I also had long-term insurance and short-term insurance for disabilities, and then Social Security. I went through those steps also. So, I went two years without income [laughs], but I had insurance through the school system and a little bit of a pension…

CP: It was awful. It only took a few months to get my retirement, but it took two years to get Social Security. I got denied twice before we finally had to just go to court for a hearing.

FP: You said you worked at Athens Regional as a tech. What did you do there?

CP: I did everything but give medicines or start IVs. And to me, it was very stressful, especially with the kids. Because, you know, I love kids, and there were times when kids were brought in after being abused at home.

FP: Was that common?

CP: It just happened every so often; it wasn’t that common. But, you know, when they bring in kids that had to have stitches or things like that, it just bothered me.

FP: And you substitute taught right after that?

CP: Not right after. I ended up staying home and doing child care at home… I took care of six children at one time. They were mostly toddlers; there was an infant, and then another child that was almost preschool age.

FP: What made you decide to do that?

FP: Do they still live in Athens?

CP: Yes. All of us live in Jackson County, but our address is still an Athens address. So, we’re just a couple of miles over the Jackson County line.

FP: What do you think keeps everyone here?

CP: The fact that there’s so much to do… We can just come into town and find anything that we need. And you’re right in the middle of a lot of other things: attractions. There’s Stone Mountain and the mountains up north, North Georgia.

FP: Do you often go up to the mountains?

CP: Well, we did, until my RA kept me from riding the bike.

FP: So, you mountain biked?

CP: My husband. He had a bike when he was younger and, since our kids were growing up and mostly moved out, he decided it was a good time to start it back up. So, we bought a motorcycle and started going up to the mountains to ride, and going to festivals up there and going up into North Carolina— the western North Carolina area. It’s beautiful up there. But last year, it got to be too painful for me to ride with the RA… Yeah. We’re gonna get a Jeep—so we can take the top off [laughs].

FP: Where did you teach and what grades?

CP: At Jackson County Comprehensive High School, the old school. They’ve split since then. I taught all the grades, ninth through 12th, social studies.

FP: What was your favorite part about teaching?

CP: The kids. Interacting with the kids. I loved the special ed kids. It got to a point in the education system where they felt that the kids would benefit more if they were put in with the non-disabled students, in the same classroom. I felt that I couldn’t interact with them like I could before, and there were a lot of things that the kids missed out on because they were too embarrassed to get the extra help once they were put in the bigger group.

FP: Do you have anything else to add?

CP: Well, I miss being able to go shopping; the mall, the little stores… They don’t have these everywhere [gestures to the motorized chair], and if they don’t, I can’t go unless my husband pushes me in a wheelchair. So, access to places is difficult, especially when you can’t afford to buy one of these of your own… I have to avoid the busy places because of the infections I get. But I still go to stores around here, we still eat [out], but we just have to choose places that have [smaller] crowds. We have to schedule around crowd issues. But we’re doing good.