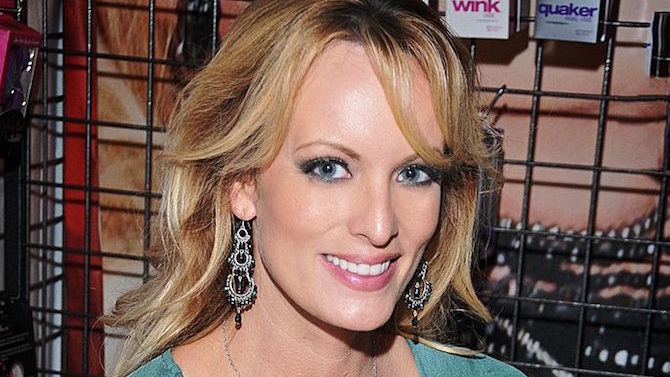 Donald Trump and Stormy Daniels used pseudonyms in the non-disclosure agreement worked out by the now-president’s seemingly suicidal lawyer, Michael Cohen. They called themselves David Denison and Peggy Peterson—but Trump still didn’t sign it, which has gotten him into a fresh pile of trouble. “Stormy Daniels” is already a nom-de-porn, but even people like Trump and Daniels whose livelihoods require an extreme level of visibility crave privacy almost as much as they demand a spotlight.

But privacy is contradictory in our half-online lives. We can post without anyone knowing who we are, but we also broadcast the details of our lives on numerous platforms and essentially carry tracking devices in our pockets. Our emails damn us, even in their absence—just ask Hillary. Our texts can be turned against us—as FBI agents Peter Strzok and Lisa Page can surely attest to, as theirs were blasted around the world. And our dumb Facebook posts and tweets follow us as we try to move into more respectable environs—see whatever Nazi sympathizer the Times op-ed page hired and fired this week.

In this context, law enforcement officers are demanding a kind of privacy not afforded ordinary citizens. This is particularly clear in a recent filing in the case against protesters and bystanders caught up in the Disrupt J20 protests against Trump’s inauguration.

After losing the first trial against six defendants late last year and dropping charges against more than 100 others, who needlessly spent months fighting against what were ultimately unsustainable charges, prosecutor Jennifer Kerkhoff is gearing up to try the remaining 58 defendants. She found an undercover agent who has been infiltrating “the anarchist extremist movement” to testify as an expert witness on the “black bloc” technique—wearing black clothes, covering up identifying features and moving together as a group.

The government is charging numerous people who—even prosecutors admit—did not physically break any of the windows that were smashed during the inauguration and who engaged in no other violence. But if they covered their faces or wore black clothes, they abetted the anonymity of those who did, and are therefore guilty of the crimes.

But the government doesn’t want to reveal the name of its witness who is allegedly an expert on these same techniques that are intended to protect privacy. Kerkhoff moved that she be called by a pseudonym “Julie McMahon”—with a possible nod to the McMahons of professional wrestling fame, or maybe to a tabloid divorcee who allegedly pursued Bill Clinton and was named “The Energizer” by the Secret Service.  However they came up with the name, the government argues that she won’t be able to continue her undercover activity if her identity is known.

“Given the repeated efforts to publicly disseminate identifying information about the prosecutor and law enforcement officers involved in this case [to include an MPD officer who acted in an undercover capacity], the government submits there is a reason to believe that the expert will be targeted in the same manner,” Kerkhoff argues.

Kerkhoff argues that when an undercover police officer testified in the first trials, people identified him. That’s not the fault of the press or the public. Don’t call an undercover officer if you don’t want to blow their cover. Or should they get to testify wearing black masks?

“Further, when the MPD officer stepped outside of the courthouse during his testimony, his photograph was taken and was disseminated on multiple social media accounts and in various media outlets,” the motion reads.

When he is outside of the courthouse, it is neither illegal nor illegtimate to take his photograph. Kerkhoff complains again that “as the prosecutors and lead detective left the courthouse, their photograph was taken and published in media outlets.”

So, the black bloc is bad for not wanting to be surveilled and identified—not to mention tear-gassed and chemical grenaded—by the state, but the agents of the state deserve anonymity, even in what used to be called “open court.”

The government also went to great lengths to prohibit the public from seeing police body cam footage—while Det. Gregg Pemberton spent a year combing through all of the personal data on the cellphones of those who were arrested. He has personally told me that he saw me all over the videos he had scoured  and that he was looking for evidence of an illegal action. He is armed. And he is afraid of a photograph?

The Department of Justice, however, denied a Freedom of Information Act request filed by Unicorn Riot to see Pemberton’s overtime slips during that period, despite allegations that he had falsely charged the city overtime while defending himself against a DUI charge in a previous case.

The U.S. Attorney’s Office in Washington and the MPD fought to protect the identity not only of their undercover officers, but also of the far-right slimeball Project Veritas operative who infiltrated an alleged planning meeting.

Meanwhile, a list of the names of everyone arrested during the J20 protest was leaked to far-right site Got News from the official police computer of Rachel Schaerr Metropolitan Police Department Employee Rachel Schaerr, according to the metadata on the spreadsheet. The names are still on the site which calls them “LEFT-WING ANARCHISTS AND ANTIFA TERRORISTS.”

This is part of a trend where law enforcement wants ever greater access to information about individual citizens, while seeking to further shield themselves. Maryland judiciary recently removed the names of police officers from its public database. If I am arrested and cleared of all charges, my name and address and birthdate remain public unless I make the effort to expunge it. But the officer who arrested me remains unknown to the public.

The move occurred amid one of the craziest police corruption scandals in modern history and stoked a serious uproar that caused the court to reverse its decision.

“It’s disgusting and it’s dishonorable,” David Simon, creator of “The Wire,” said of the attempt to hide police officers names in Maryland. “And generations of police officers that were capable of standing by their police work, publicly standing by their use of force, their use of lethal force, and their powers of arrest, those generations are ashamed right now, because this present one is pretending they are incapable of that level of responsibility.”