America’s Most Reactionary President Visits Its Most Radical City 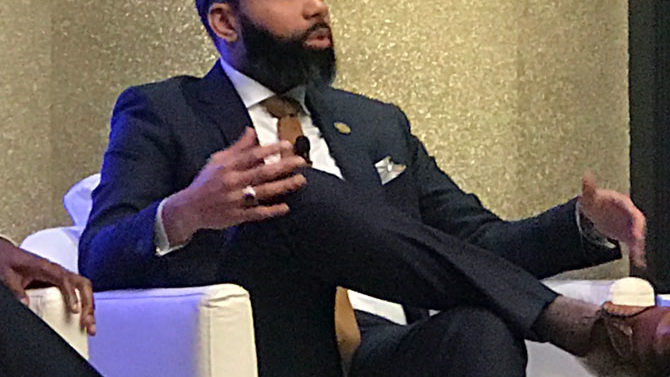 Noted racist and President Donald Trump had the audacity to attend the opening of the Mississippi Civil Rights Museum in Jackson last Saturday.

“I knew a little before everybody else, but I’ll simply say this without even referencing Trump himself,” Jackson’s mayor, Chokwe Antar Lumumba, told me when the visit was announced. “The opening of the Civil Rights Museum is an important moment of a recognition of struggle, and out of that struggle we’ve seen people historically rescue themselves in a state that has been known for some of the most negativity that the world has ever seen.”

Lumumba took Trump’s election last year with a certain level of equanimity, saying that on the day after the election, “I woke up in Mississippi, which means whether it is Obama, Clinton or Bush, Mississippi is still at the bottom.”

But Trump’s refusal to condemn the white supremacists in Charlottesville, VA caused many civil rights leaders, including John Lewis, to threaten to boycott the opening if the president attended. But it wasn’t just Charlottesville. White supremacy may be the only consistent ideology of the Trump administration.

“We have to observe this corrosion of integrity and this erosion of people’s human and civil rights, and identify what role or what steps we’re willing to take,” Lumumba said. “It’s important that we recognize that struggle. But any celebration of struggle, any recognition of struggle must consider what the next step forward is.”

Trump, being Trump, made the controversy worse by seeming to support a justification of slavery. Days before the presidential visit to the first state-sponsored Civil Rights museum, Roy Moore, the Alabama senatorial candidate who is supported by the president despite allegations of inappropriate sexual behavior with minors, went viral saying that America “was great at the time when families were united—even though we had slavery, they cared for one another.”

Just in case there was any question about what Trump thought of this definition of his catchphrase, the very next day he tweeted: “LAST thing the Make America Great Again Agenda needs is a Liberal Democrat in Senate where we have so little margin for victory already. The Pelosi/Schumer Puppet Jones would vote against us 100% of the time. He’s bad on Crime, Life, Border, Vets, Guns & Military. VOTE ROY MOORE!”

When he finally got to Jackson, Trump, who was invited by the state’s white Republican governor, Phil Bryant, spoke to a small crowd, primarily reading from a script, and not at the main event. “The fight to end slavery, to break down Jim Crow, to end segregation, to gain the right to vote and to achieve the sacred birthright of equality—that’s big stuff,” Trump said. “Those are very big phrases, very big words.”

Lumumba has some more big words for Trump. He wants Jackson, a city in deeply red Mississippi with a long history of racism and white supremacy, to be the “most radical city” in the world. Bigly.

“Ultimately what I mean by being the most radical city on the planet is giving people more access,” he told my colleague Jaisal Noor. “We do this through the… movement of people’s assemblies that allow people to speak to their conditions, and so that is very important to us.”

People’s Assemblies are “vehicles of Black self-determination and autonomous political authority of the oppressed peoples’ and communities in Jackson,” according to the Jackson-Kush Plan, a document produced by the Malcolm X Grassroots Movement (MXGM) and the Jackson People’s Assembly. “The Assemblies are organized as expressions of participatory or direct democracy, wherein there is guided facilitation and agenda setting provided by the committees that compose the People’s Task Force, but no preordained hierarchy.”

The movement grew out of a collaboration of Black activist groups forming in the Mississippi River Delta in the wake of Hurricane Katrina’s destruction and quickly managed to take over the city of Jackson when Lumumba’s father won the mayorship in 2012.

“Free the land” was a common refrain in the elder Lumumba’s first campaign. It came from his trip to Mississippi in 1971 to start an autonomous black nation in that state with the “Provisional Government of the Republic of New Afrika.” To get to their land, Lumumba and his comrades had to face down the Klan. This weekend, with the president’s visit, his son, who succeeded him as mayor, had to take a similar stand.

The younger Lumumba had resisted repeated calls to run for office. But when his father died in 2014, he decided to run. He won a decisive victory earlier this year, giving some hope as to what a city can do outside of larger national trends. Lumumba and the People’s Assemblies offer a serious alternative to Trumpian authoritarianism.

Baynard Woods is a reporter for the Real News Network and the founder of Democracy in Crisis. Twitter: @baynardwoods