Welcome to Kekistan, Where Online Trolls Supply Memes for the Alt-Right

In Charlottesville, VA, when it seemed like the Nazis had been driven from town, shortly before the terrorist attack that killed Heather Heyer, a group of anti-racist protesters gathered in a small park and set fire to several Confederate flags and a big green, white and black Kekistani flag.

I stood in the dirt beneath a tree and watched the two flags wither and curl beneath their own combustion on the dark ground. One was born of the slaveholder insurrection against the U.S. and the other from what some in the message-board subculture call the “great meme war of 2016,” and both, somehow, represent the Trump coalition.

The fictional nation of Kekistan grew out of the Pepe the Frog meme. Pepe became popular after a Boy’s Club comic strip by his creator, Matt Furie, depicted him peeing with his pants all the way down because it “feels good, man.”

The gamers, “men’s rights” activists, hackers, trolls and shitposters who populate sites like 4chan started embracing the Pepe the Frog meme to symbolize, as Dale Beran wrote in a post that went viral last February, “embracing your loserdom, owning it.” Soon, Pepe, who had come to embody the troll ethos, also found an analog in politics. “Trump, the loser, the outsider, the hot mess, the pathetic joke, embodies this duality. Trump represents both the alpha and the beta,” Beran wrote.

In May, Furie drew another strip, showing Pepe lying dead in a casket. But his creation had by then already escaped him.

At the same time as the far-right elements on message boards began to adopt Pepe, they also began using the letters KEK instead of LOL to indicate online laughter. Then, when they noticed that there was an Egyptian god named Kek, which was depicted as a frog-headed man, these guys—and they are decidedly guys—had a mythology and a god. According to the Southern Poverty Law Center’s entry on the alt-right’s association with the deity, “Kek was portrayed as a bringer of chaos and darkness, which happened to fit perfectly with the alt-right’s self-image as being primarily devoted to destroying the existing world order.”

To go along with their new half-ironic religion, they created a purely digital (and imaginary) country called Kekistan, and after the election they made Trump their God Emperor. And they started getting flags made.

Now, to free his Pepe from the far right and the racists, Furie has sent cease and desist notices to a number of alt-right figures, such as Richard Spencer, Mike Cernovich and Baked Alaska.

Baked Alaska, who claims to have been almost blinded by Antifa activists in Charlottesville, tweeted: “Hillary Clinton’s lawyers have been summoned to sue me & others over a cartoon frog meme. Bad idea to start this battle.” The ability to post whatever they want online is the main political issue for many of the shitposters, and so they have called for a new meme war attacking Furie for challenging their use of his creation.

But the two flags burning beside each other stuck in my mind, so the next time I saw some Keksters, at the Mother of All Rallies on the National Mall earlier this month, I asked them about the association of their flag with that of the Nazis in Charlottesville.

I talked to one guy who carries a flag and wears a green robe, but he had nothing much to say before scampering off behind an Eric Trump-looking Proud Boy like a cartoon puppy. Another one wore a T-shirt with a green fist rising up above the word “Kekistan.” Below, it said something about the “normie occupation,” a phrase used to indicate the oppression of the nerd by normal people. With his long beard and cossack hat, it half-looked like he was cosplaying Alexander Dugin, the bearded Russian theorist sometimes called “Putin’s Rasputin.” He said his name was Diogenes, because Diogenes the Cynic was the first real troll. 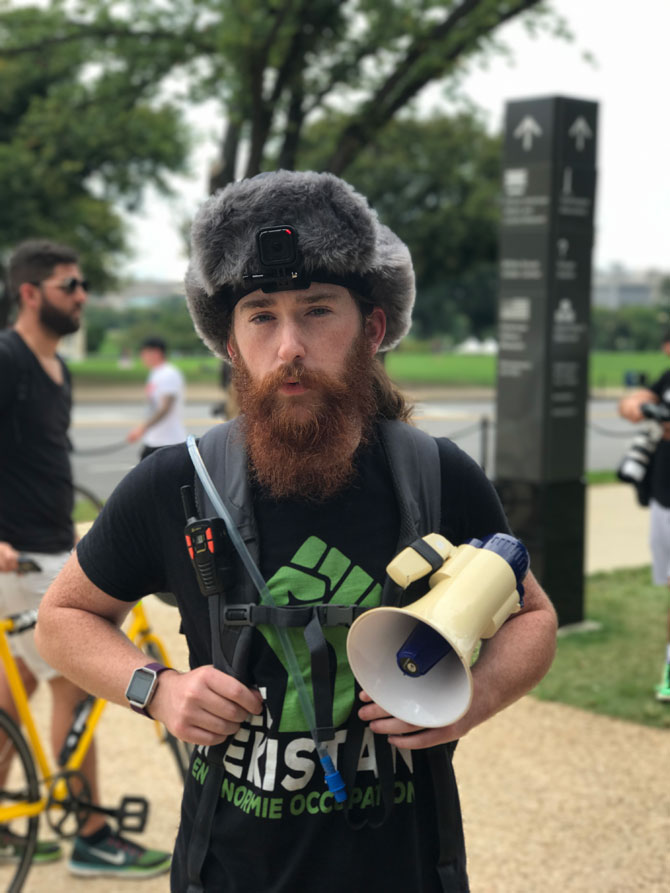 “I am an ethnic shitposter,” he said. “Which is, essentially, I’m an asshole for the sake of being an asshole.”

“At Charlottesville I saw people burning a Kekistan flag, as well as a Confederate flag and stuff, and if a shitposter is just being an asshole to be an asshole, is that cool?” I asked. “Is that part of being an asshole, or does that bother you like…”

“Oh, people have the freedom to do whatever they want, so long as they’re the ones who bought it and own it themselves,” said Diogenes. “If it’s their property, like…”

“No” he said. “People are going to freely associate with whatever they want. I mean, it’s unfortunate that they they had to bring an insane racism to it, but there are those people… Some of them do it just to be an asshole, and they think that they’re edgy, and it will hurt people’s feelings.”

That really stunned me, but it shouldn’t have. For shitposters like Diogenes, it seems that the big problem with the Nazis is that they aren’t ironic enough in their hatred.