From Arpaio to Putin, Politics as Crime in the Age of Trump 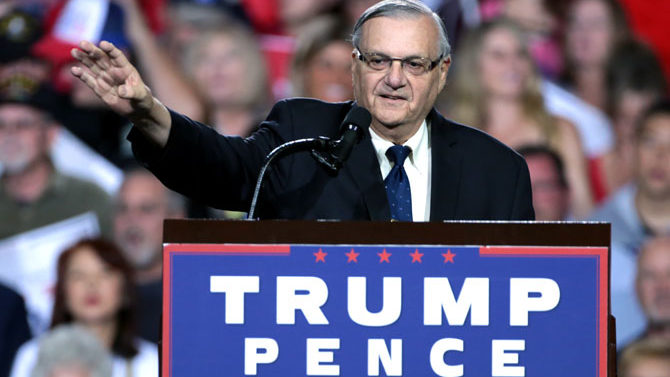 In the same Phoenix campaign rally—yes, it was actually paid for by Trump’s 2020 campaign—where Trump spent 15 minutes attacking the press and Antifa and defending “our heritage” embodied in Confederate statues, he all but promised that Arpaio would be pardoned, but didn’t actually do it. Instead, he waited until Hurricane Harvey was bearing down on Houston to pardon America’s most famous Torquemada impersonator, because he thought the ratings would be better.

But even more than all of this, Arpaio’s career is an encapsulation of what matters most to Trump: sheer, brute force masquerading as law. Politics as crime or crime as politics.

The stories that the Phoenix New Times ran about Arpaio over the course of two decades constitute a crash course in American fascism. Not only did Arpaio openly call his tent-city jail a “concentration camp,” but the rate of suicide in his jail was double or even quadruple that of most other jails. Many of these deaths were never even investigated. Jailers denied people medical coverage and strapped them to a torture chair if they raised any hell about it. They closed the only vents bringing fresh air to hot cells, causing at least one death. Arpaio failed to investigate reports of sexual assault.

When the New Times reported on Arpaio’s real estate interests and included his address, he tried to bring charges against the reporters (who were also the founders of the paper). Later, his men arrested the reporters at their homes in the middle of the night for revealing grand jury proceedings—a misdemeanor.

While Arpaio seems to be generally sadistic, he prides himself on being especially cruel to people with brown skin, whom he racially profiled and held in their own segregated part of his “concentration camp.” This unconstitutional racial profiling is the source of the crime that Trump pardoned.

In 2008, George W. Bush’s administration began an investigation into Arpaio’s racial profiling. In 2011, the Department of Justice ruled that he had in fact been engaged in the systematic profiling of Latinos in Arizona.

The case in which Arpaio was charged with criminal contempt of court stems from even before the DOJ investigation, when a 2007 traffic stop became a class-action suit. A 2011 court order commanded the Maricopa County Sheriff’s office to stop detaining people on suspicion that they had immigrated illegally, i.e. because they had brown skin. He also tried to destroy hard drives that were supposed to be handed over as part of the investigation and hired a private investigator to spy on the judge and his wife.

Reading the stories highlighted by the New Times’ now-viral Twitter thread laying out 20 years of Arpaio’s criminal politics, I was reminded of Ron Rosenbaum’s wonderful and tragic portrait of the Munich Post, which covered Hitler from before the Beer Hall Putsch to until he took power—and then killed most of the writers and editors of the paper. Like the New Times, the paper mixed hard-hitting investigative pieces with satire and humor intended to taunt, and ideally thwart, the soon-to-be Führer.

“There were other opponents to Hitler, but they were the ones who were constantly investigating him and discovering things that were really not well known about Hitler’s rise—how much he depended on his death squads to murder his political opponents, for instance,” Rosenbaum told me back in February, when the Los Angeles Review of Books published a piece that revisited the chapter on the Munich Post in his 1998 book Explaining Hitler.

According to Rosenbaum, the Post’s essential insight into Hitler was that he was a political criminal. While later historians have credited Hitler’s rise on his power as a public speaker, the Munich Post showed that murder, extortion and blackmail played an even larger role. While others were laughing off Hitler in the same way we laughed off Trump or the alt-right, the Post tried to open the public’s eyes. They uncovered Nazi party documents in 1931 that contain the first mention of the “final solution” to the “Jewish problem.”

So when Sheriff Joe “jokes” that his tent city is a “concentration camp,” we should take note. When he raids the homes of journalists who question his shady business dealings, we should take note, and we should be on guard. When Trump pardoned Arpaio, he was sending a signal that he, like the Arizonan torturer, has contempt for the court and rule of law. It was also a promise, not only of more brutality, but perhaps that he would pardon those probed by special counsel Robert Mueller, should charges arise.

Political criminality explains Trump’s fevered admiration of Vladimir Putin, who is the master criminal politician. (Read Masha Gessen’s The Man Without a Face if you want to be chilled to the bone.)

The emails from Felix Sater—a convicted criminal and informant with longtime ties to Trump and his organization—promising Trump’s lawyer that Putin would help get the Donald elected president are only the most recent example of the Trump/Putin nexus of political crime. “Our boy can become president of the USA and we can engineer it,” Sater wrote to Michael Cohen. “I will get all of Putins [sic] team to buy in on this, I will manage this process.”

Sater, who did time for stabbing a man in the face with the stem of a broken margarita glass, seems to connect the kleptocracies of Trump and Putin, whom many estimate is the richest man on the planet, with criminally gained money hidden around the world—the other reason Trump loves him.

If we don’t heed these warnings, we know what is coming.