Charlottesville Was the End of the Right-Wing Counterculture 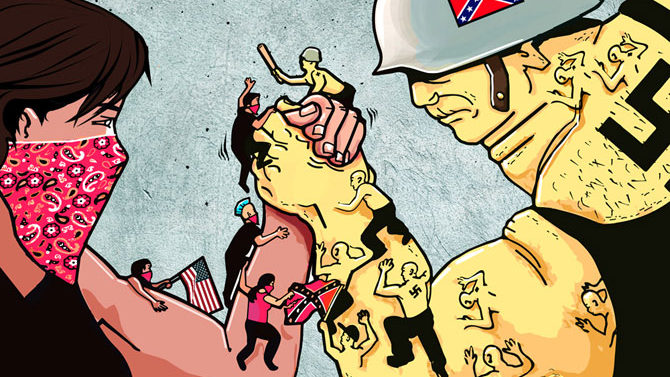 One night last week, I suddenly started pouring sweat, heart pounding, as I fell off my couch. I couldn’t feel my hands or my feet, and my vision was narrowing, occluded by static, into a small spot. It was the beginning of a high-fever, five-day stomach flu. To paraphrase Joan Didion, it was not an unreasonable response to the summer of 2017.

I’ve been thinking about Didion a lot, especially Slouching Toward Bethlehem, essays on the lost children of the Summer of Love and an extended meditation on William Butler Yeats’ poem “The Second Coming.” The line connecting Yeats to Didion to us: The center cannot hold.

The election should have shown us that clearly. The majority lost, and we elected an authoritarian entirely uninterested in compromise.

Some of the president’s most prominent supporters on the far right think of their movement as countercultural. Paul Joseph Watson, a British YouTube twit turned Alex Jones acolyte, even sells swag sporting the phrase, “Conservatism is the New Counter Culture.” He’s not entirely wrong. As Watson points out, he’s not talking about Mitch McConnell, but the likes of him and Milo Yiannopoulos and Cassandra Fairbanks, who also writes about conservatism as the new punk. Even Mike Flynn is a surfer.

This so-called counterculture of pseudo-journalists is trying hard not to be called “alt-right”—the moniker was coined by Depeche Klan clown Richard Spencer—because the Unite the Right rally Spencer was supposed to speak at gave this counterculture its Altamont.

“Stones Concert Ends It: America Now up for Grabs,” read the headline in the Berkeley Tribe in December 1969, following the massive Rolling Stones concert where Hells Angels, who were supposed to be security, killed a young African-American man named Meredith Hunter.

When James Alex Fields slammed his car into a crowd of celebratory Antifa protesters marching through Charlottesville after the racists had been largely routed, killing Heather Heyer, he changed the American right in ways they don’t understand, just as the Hells Angels murder at a Rolling Stones concert changed the left of that era. It destroyed their counterculture, releasing and magnifying its most violent elements and revealing its essence.

It was a tragically clarifying moment, and Donald Trump has decided where he stands. He erases every measured statement read from a teleprompter with an unhinged rant about how they are trying to take our heritage away when statues of white supremacists are taken down.

Trump sees the battle as one not between Democrats and Republicans, but between the alt-right—the deplorables and Nazis and the guys wearing white khakis and polos and the new right media frat pack counterculture crew, all led by himself—and the “alt-left”—Black Lives Matter, Antifa and maybe he hates journalists enough to throw us in there, too. “They show up in the helmets and the black masks and they’ve got clubs—they’ve got everything,” Trump said in Phoenix, before letting loose with a sort of weird holler: “Antifa!”

Americans might have been surprised to see Nazis in America, but anyone who was ever involved in a punk scene knew about Nazis. There were always skinheads around. And often punks to kick their asses.

That’s essentially what Antifa is—punks getting shit done. The anticapitalist, often anarchist activists don’t just fight Nazis. They do Food Not Bombs, collecting food from grocery stores and markets to feed to the homeless. They offer court support to political prisoners and work as street medics during protests. In Charlottesville, it was street medics who helped tend burning eyes and busted faces. And when Fields drove his car into the crowd, street medics cared for the injured in the crucial moments before ambulances arrived.

And Antifa will fight. “If it hadn’t been for the antifascists protecting us from the neo-fascists, we would have been crushed like cockroaches,” said Cornel West, the famous intellectual, noting that the “police didn’t do anything in terms of protecting the people of the community, the clergy.”

One reason that the cops didn’t do anything: They were guarding the windows of the shops flanking Emancipation Park. The cops, it seems, were more worried about Antifa than the alt-right. Because sometimes some of them also break windows.

More than 200 people were arrested in an antifascist and anticapitalist black bloc protest on Inauguration Day after some people in the group smashed the windows of several multinational corporations like Starbucks and Bank of America. There hasn’t been a lot of interest in the case on the broader left, because many find it hard to sympathize with people who smash shit. They think people should be punished for that kind of stuff, without quite realizing how it is that the government is charging 200 people for breaking the same windows. But the District of Columbia’s chief judge made a ruling on Aug. 24 that may make the broader left more sympathetic toward the J20 defendants.

“You are providing all the data to the government,” Chief Judge Robert Morin said to lawyers for DreamHost, the web registrar that hosted disruptj20.org. They were fighting against a warrant that would allow the government to take all of the contents of that site and any emails associated with it. The placed some limitations on what could be done with the information, but still demanded it all be handed over to the Feds.

“It appears that what the government is saying is that just because it is under the same domain, they can use one search warrant to obtain content from numerous specific email accounts,” said Raymond Aghaian, a lawyer for DreamHost, who likened it to searching all Gmail accounts with a single warrant.

“That’s problematic. People don’t want the government to have their information if they didn’t do anything wrong,” said Paul Levy, who argued for anonymous “Doe” citizens for Public Interest. “And what the judge’s order fails to do is to take adequate steps to protect the interests of those Doe users.”

A lot more people go online than will ever be arrested at a protest, and no one likes the idea of giving the government a list of people who have visited a site opposed to the president.

If the larger left can embrace Antifa and Black Lives Matter, instead of being scared of its own most vital elements and rushing toward the center, it may have some sort of chance. The center cannot hold.