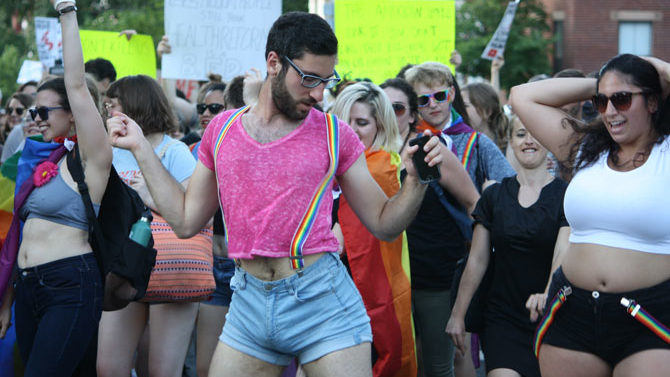 A swanky stretch of C Street near the Capitol in Washington, DC was blocked by a raucous crowd dancing in front of Senate Majority Leader Mitch McConnell’s house on an unseasonably cool summer evening. As music blasted from loudspeakers, the scene resembled a Pride block party, as about 50 members of the LGBTQ community and their allies attempted to dance away their fears and anger over McConnell’s so-called health-care bill, which was negotiated in secret.

The group behind the daylight dance party on C Street received an anonymous email with McConnell’s home address, according to Carla Aronsohn, one of the organizers.

According to the Congressional Budget Office, McConnell’s tax-cutting bill will strip health care from 22 million people. The LGBTQ community feels particularly vulnerable to these cuts.

“The health-care bill that’s currently in the House and the Senate would be a huge step back, both for trans people specifically, and for all of us who care about the health and the well-being of our neighbors,” said Rebecca Kling of the National Center for Transgender Equality.

The group first gathered at Union Station to pass out rainbow suspenders, sunscreen, bottles of water and watermelon slices. Then they marched through the streets to “show with our bodies, with our voices, with our rad dance moves that this is an issue that is important to LGBT Americans and it is important to everyone,” Kling said as she assembled a long flagpole, on which she would soon hoist a rainbow flag and the pink, blue and white trans flag.

As they set off, they were bookended by the cars of two authority figures: The mother of organizer Firas Nasr drove a station wagon at the head of the parade, and a police car trailed behind, flashing its own disco lights on the tony brownstones. Once the group arrived in front of McConnell’s house, they began throwing confetti that, Nasr assured everyone, is biodegradable.

It is doubtful the confetti will last that long on his sidewalk. “In Washington, [McConnell] lived in a Capitol Hill townhouse where neighbors saw him come out on a regular basis with a broom in hand to sweep away every last bit of leaf or twig from his stoop,” Alec MacGillis wrote in his superb book The Cynic: The Political Education of Mitch McConnell.

MacGillis’ 2014 book paints a portrait of McConnell as a man cynical and shrewd enough to recognize his own limitations and compensate for them with procedural or monetary mastery. He relished the process of raising money, and used the cash he collected to pay people like Roger Ailes to create dishonest ads that would discredit his opponents.

McConnell hired Ailes in 1984, when he first ran for the Senate, against two-term incumbent Walter “Dee” Huddleston. According to MacGillis, McConnell later acknowledged that Ailes’ ad showing Kentucky bloodhounds chasing down the incumbent—falsely depicted as a largely absent senator—were “fundamentally unfair.” But still, it helped him win.

McConnell’s lack of scruples may make him the most influential person of our era—and may explain how a man who suffered from polio as a child can craft a bill that punishes people with similar illnesses.

Even Donald Trump is worried that this bill is “mean” or lacks “heart.” Based on his tweets last week, Trump seems to have only recently learned the word “obstructionist,” but it was McConnell’s rallying cry from the beginning of the Obama Administration. It forced Obama to use executive orders to accomplish his goals, and Trump has been able to easily overturn those.

While his greatest victory is the theft of a Supreme Court seat, McConnell’s first major binge on obstruction came in the long debate over Obamacare. McConnell ultimately lost that fight, and spent the next seven years talking about repealing and replacing it.

Now that he actually has to do it, it’s not so easy. When the Senate bill was finally released, there was chaos at McConnell’s office. Capitol police officers pulled disabled people protesting from their wheelchairs and assistive devices and dragged them away. It was an outrageous scene. The activists displayed extraordinary courage in the face of McConnell’s cowardice and the moral bankruptcy of officers just following orders.

Against this backdrop, the crowd ecstatically dancing in front of McConnell’s house was even more surprising in its embodiment of outrage and ecstasy. Trump’s popularity is driven, in part at least, by the joy of anger. This is its opposite—the anger of joy. The joyous outrage on display as the evening sun cast a spectacular golden light on all of the shaking booties, upraised fists and fluttering flakes of confetti, which ended up in the McConnell mail slot, somehow embodied the exact opposite of McConnell, who operates in shadows.

On the day after the dance party, McConnell realized he wouldn’t be able to get the votes he needed to pass the bill and postponed it until after the July 4 recess. The delay had everything to do with defecting Republicans and nothing to do with the getting down in front of his abode. Still, on the anniversary of our declaration of independence from England, as people ponder again what America means, I will think of these dancers as they shake it away from McConnell’s house.