Roger Stoned: The GOP’s Dirty Trickster Can Almost Sound Like a Hippie 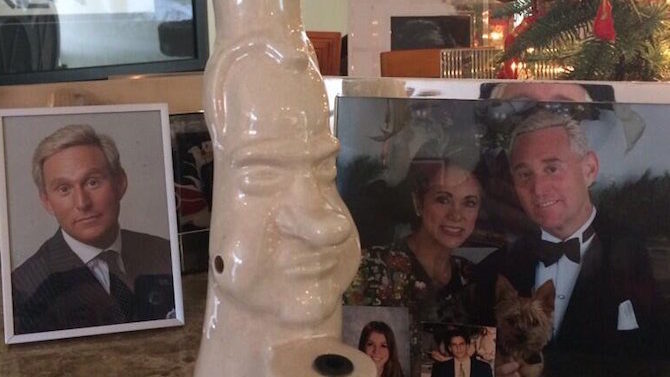 Roger Stone has two bongs shaped like his hero, Richard Nixon. “One’s in the shape of his head, the other is kind of more artsy,” he said. “They’re both very cool, but they’re a symbol to me that the war on drugs, as waged by Nixon, was a failure. Is a failure.”

Stone, the famous Republican dirty-trickster dandy who first came to public attention when a stunt to discredit a Nixon opponent came to light in the Watergate hearings, is as responsible for Trump’s ascent to the presidency as anyone. He has been urging Trump to run since the late 1980s and was an early manager of last year’s campaign. He saw Nixon’s anti-elitism as key to a future Republican victory—and was proven right when he helped a billionaire ride to the White House on the back of resentment against “the establishment.” He has a long history of racist and sexist remarks and founded an organization—Citizens United Not Timid—so he could call Hillary Clinton a… well, just look at the acronym.

But of late, in addition to being at the center of the Russia scandal, Stone has been chiding the president for not reigning in Attorney General Jeff Sessions’ outdated ideas about drugs.

“Sessions comes out of that conservative, Southern, old-time tradition,” Stone told me on the phone. “I think he’s quoted as saying, ‘Good people don’t smoke marijuana.’ No, senator, sick people smoke marijuana. And it helps them. More than Western medicine sometimes. He has no life experience with that. He could not possibly understand because, you know, within Jeff Sessions’ circle of acquaintances and friends, he probably doesn’t know anyone who smokes marijuana.”

Stone, a snazzy-dressing swinger with a bodybuilding physique and a tattoo of Nixon on his back, is a libertine who might like to toke. But he also sees it as a philosophical issue.

For a crafty veteran of about 10 presidential campaigns, it’s a political issue as well.

“I think a lot of younger voters, I think a lot of libertarian-oriented voters—they may not even know that term—but voters who are fiscally conservative but socially progressive, I think they voted for Trump,” Stone said. Among those coming to Trump were pothead supporters of Libertarian Gary Johnson.

I asked if he had talked to the president about it directly. “I’m gonna duck that question,” he said. “I just don’t want to fuck up my effectiveness, so I’d rather not address it.”

I wondered if Sessions—and by extension, Trump—might want to keep the drug war going for the same reason they started it, according to Nixon aide John Ehrlichman, who told Harper’s reporter Dan Baum that the administration used it to target and demonize its political enemies.

“The Nixon campaign in 1968, and the Nixon White House after that, had two enemies: the antiwar left and black people. You understand what I’m saying?” Ehrlichman told Baum in 1994. “We knew we couldn’t make it illegal to be either against the war or black, but by getting the public to associate the hippies with marijuana and blacks with heroin, and then criminalizing both heavily, we could disrupt those communities. We could arrest their leaders, raid their homes, break up their meetings, and vilify them night after night on the evening news. Did we know we were lying about the drugs? Of course we did.”

“I’m not sure if it was as nefarious as Ehrlichman would put it,” Stone said. “I mean, yeah, at the time, the Nixonites, myself included, thought that all hippies smoke marijuana, and all hippies were against the war, and therefore all hippies were wrong.”

Now he has rethought all of that.

“In retrospect, I—any objective person has to realize that the war on drugs has been one giant, expensive, ignominious failure. We’re incarcerating people, we’re not rehabilitating anyone. We’re destroying lives over non-violent crimes, sometimes first-offense crimes. The whole question of drug abuse should be viewed as a public-health issue, not a criminal issue.”

And to show just how bizarro our political world is now, Stone, the ultimate Nixonian, is not only pro-pot but anti-war (“Anti pointless war when our national interest is not perfectly clear” he later clarified via text). Even if he recognizes some political benefits—including taking the “wind out of” the Russia investigations—to bombing another country, he said that, “going forward, Syria to me is a defining moment.”

“If this extends to a wider war, boots on the ground, saturation bombing, well then, the Trump coalition will fracture, and it will be hard for him to govern.”

Ever conspiracy-minded, Stone wondered if the chemical attack on civilians may have been what conspiracy theorists call a false flag.

“Could the use of chemical weapons in Syria have been a false flag not perpetrated by Assad?” he asked. “Look up Gulf of Tonkin, but carefully. It never fucking happened. It was a phony operation Johnson used to justify a wider Vietnam War. That’s an indisputable fact today. We didn’t know it at the time. So yeah, I think the Deep State is capable of anything.”

It is true that Johnson—whom Stone believes had Kennedy assassinated—lied about U.S. ships coming under fire in the Gulf of Tonkin, justifying the resolution which remains the blueprint for military action undertaken by presidents without congressional approval. But that doesn’t necessarily say much about what is happening now in Syria.

But for Stone, it’s all part of the Deep State.

“There’s a permanent bureaucracy—I think what Eisenhower called the military industrial complex—of people in the Pentagon and the intelligence agencies and the defense contracting industry who have one neocon-based worldview,” he said. “They like foreign wars; they’re extremely profitable for some people.”

Stone was starting to sound like a hippie again.

But as he went on about the Deep State, which he thinks may have twice tried to assassinate him recently, I wondered if weed was making him paranoid—he has, after all, claimed to be developing a strain called Tricky Dick, whose primary feature, I imagine, would be paranoia.

“Am I paranoid? No, I’m pretty realistic,” he responded.