Trump’s Deconstruction of the Administrative State 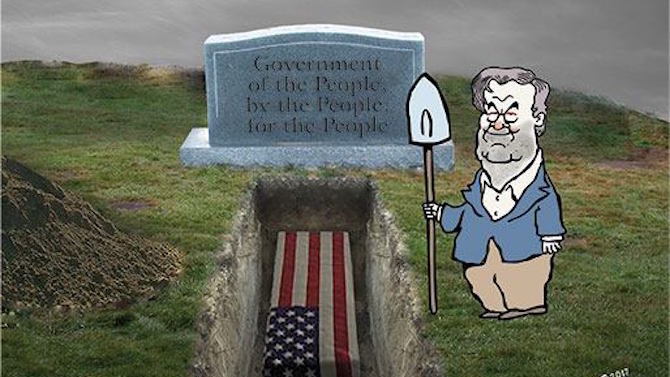 That’s right, to get rid of federal agencies. And we can guess which ones they will be. When Trump’s budget is released later this week, it will likely become even more painfully clear what the regime’s chief strategist Steve Bannon meant when he talked about the “deconstruction of the administrative state.”

But we’ve got a pretty good sense of how this is going to go, with the Post reporting that Trump’s budget proposal “would shake the federal government to its core,” which is precisely what Bannon hopes to do.

“If you look at these Cabinet nominees, they were selected for a reason, and that is deconstruction,” Bannon said at the ultra-right CPAC conference.

It seems he is using the fancy word “deconstruction” to add intellectual heft—and perhaps to troll leftist professors—when the executive order made it clear he really just means “destruction.”  And the executive order calls on the heads of all of the agencies to look for ways to eliminate them.

Most of the agencies are still wildly understaffed, allowing the administration to bemoan a lack of Democratic cooperation while also achieving their goals by means of “beachhead” teams, which, as a Pro Publica investigation showed, are stocked with the kinds of outcast Trump loyalists that sound more at home in a James Ellroy book than a federal agency.

Francisco, who was appointed last Wednesday, explains the issue in a written statement to a House committee in 2011:

Every student of high school civics understands the basic contours of our system of separated powers: The Legislative Branch makes the law. The Executive Branch enforces the law. And the Judicial Branch interprets the law. But consider how this often plays out in the modern administrative state: Congress passes a broad and open-ended law, leaving it to an Executive Branch administrative agency to ‘‘fill in the gaps’ through administrative regulation.The agency then promulgates regulations interpreting and implementing that open-ended law. And when the issue gets to the judiciary, the courts, as a general matter, defer to Congress’s decision to delegate to the agency the policy-making functions in the first place.

Francisco also argued, by the way, on behalf of now Commerce Secretary Wilbur Ross’ coal company when Congress investigated the Sago Mine disaster, for which it was responsible. It’s not easy to see this disaster as a template for what to expect as regulations are “left to” the states.

Fransisco has been acting Solicitor General and argued for the disastrous Trump travel ban. And of course, in the scenario above, he is right in line with the administration’s desire to change the way Washington works.

Gorsuch, whose confirmation hearings begin March 20,  is also on record as opposing the Chevron doctrine which rules that courts will defer to agencies when it comes to the interpretation of statutes or provisions under their control.

Gorsuch argued (in a concurring opinion) that the doctrine allows “executive bureaucracies to swallow huge amounts of core judicial and legislative power and concentrate federal power in a way that seems more than a little difficult to square with the Constitution.”

While this might seem like a check to the president’s attempt to consolidate power, it actually enables the administration to take power away from the agencies, while strengthening the hand of the chief executive and his hand-picked coterie of radicals.