A Crazy Quilt of Theater Options 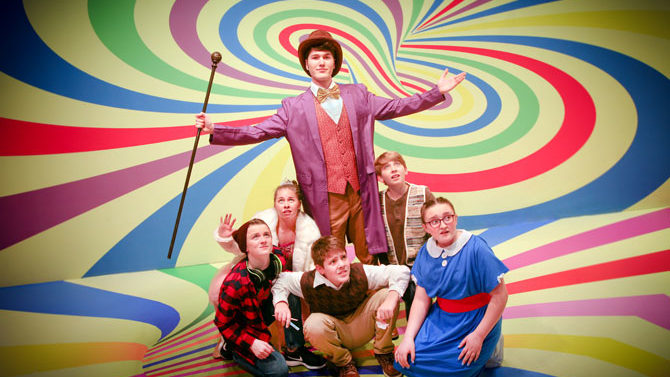 Theater folk are all over the place this month. There’s a 50-year romantic friendship spelled out in letters, an intense parent-teacher conference, sweet dreams coming true in a candy factory, celebration of girls’ friendships and play, outlaws on the side of the oppressed in merry old England, musical nostalgia for the ’50s–’60s, raucous older women looking for vacation romance, rebellious queer daughters determined to make their own life choices, and spoofing Shakespeare all the way to the moon. It’s just barely possible to pack your schedule and see them all, with enough motivation.

Gidion’s Knot: Interactions between parents and teachers can be fraught enough when they’re talking about typical kids, but this one is about as difficult as it can get. A mother (Robyn Accetta) shows up for the conference with her fifth-grader’s teacher (T. Lynn Mikeska), even though her son has recently died by suicide. Who is to blame for what’s happened? Teacher, parents, child, classmates, society, all or none of the above?

According to director Kristin Kundert, the UGA professor whose recent Othello received rave audience reviews, “Everyone has a part to raising a child.” How do we make better classrooms and better lives for all our kids? Written by Johnna Adams, the play asks all this and more. It should pack quite a punch with this powerful pair of actors.

Shakespeare on Fire: Billed as “Monty Python meets Shakespeare,” this spoofy night of silliness by Chase Brantley and Max Norman aims to appeal to all, whether they are fans of the Bard or not. Bonus: You can take advantage of a full bar, snacks and coffee, and if you have fun, you can sign up to take Monday-night comedy classes with recent MFA acting graduate Taylor Wood.

Glue: Play is the glue that holds friendships together when we’re kids. What holds friends (Ana Grullon, Hannah Manning and Isabel Mezzacappa) together once they’re grown? The piece is devised, “meaning the entire product is created by the aforementioned artists from scratch,” according to director Wood. If you miss it Feb. 27, you’ll have a chance to see it when it moves to Moonlight Theater Company later in March.

Robin Hood: Robin Hood (Joey Martin) and his merry band of outlaws (including Jeremy Miller as Little John, Jason Bray as Will Scarlet, Avery Barber as Friar Tuck and August Williams/Hannah Fordham as Maid Marian) fight to save their homeland from shady politicians seeking to enrich themselves illicitly at the expense of the common folk. There are public performances, plus additional shows available for school kids.

Smokey Joe’s Café: The Songs of Leiber and Stoller The recent Off-Broadway revival was described as “a feast of pop nostalgia” by Laura Collins-Hughes of The New York Times. The 1995 Broadway production received seven Tony nominations and ran for five years. It’s a musical revue celebrating the songs written by Jerry Leiber and Mike Stoller, including “Stand By Me,” “On Broadway,” “Jailhouse Rock,” “Hound Dog” and more.

OnStage Walton at the OnStage Playhouse presents the performance on Mar. 1–2 and 8–9 at 8 p.m., with 2 p.m. matinees Mar. 3 and 10. Tickets are $15 and available at Carmichael’s Drug in Monroe or onstagewalton.com.

Roald Dahl’s Willy Wonka JR.: Charlie Bucket (Jaxson Ruffner) is a good kid with a sweet tooth and a family living in poverty. His dream comes true when he wins a rare golden ticket to an exclusive tour of the candy factory owned by the enigmatic Willy Wonka (Nicholas Futris). He’s a better rule-follower than the other kids; could there be an even bigger prize than a lifetime supply of free candy?

By Leslie Bricusse, Timothy Allen McDonald and Anthony Newley, it’s presented by Brightstone Athens at Brightstone Theatre in Watkinsville Mar. 1–2 at 7:30 p.m., with 2:30 p.m. matinees Mar. 2–3. Tickets are $14 in advance, $17 at the door and available at brightstoneathens.com.

Love Letters: Melissa (Gay McCommons) and Andrew (David Swisher) have the friendship of a lifetime, beginning in childhood. Their long-distance love story by A.R. Gurney unfolds as a series of letters written over decades as their deep fondness for each other never fades, despite different paths in life. It’s a poignant, witty story that everyone should experience at least once, if they have the chance to see it performed by seasoned actors like these.

Love Letters is presented by Town and Gown Players at the Athens Community Theatre Mar. 1–2 at 8 p.m., with a 2 p.m. matinee Mar. 3. Tickets are $5 and available at townandgownplayers.org.

Four Old Broads on the High Seas: Local playwright Leslie Kimbell and Winder-Barrow Community Theatre are teaming up again for another offering in her “old broads” series. In this sequel, the ladies are going on a seniors’ cruise to the Bahamas. On this vacation to test the strongest relationships, there’s romance, competitive flirting, joking around and a murder mystery.

Emperor of the Moon: It’s a 17th Century, commedia-based Restoration farce written by Aphra Behn, England’s first professional female playwright, who was also a spy for the crown. It features a dad (Elijah Harris) who believes so strongly in life on the Moon that he decides he has to get men from the Moon as husbands for his daughter (Emma Shuman) and niece (Taylor Underwood). Choosing to be masters of their own destiny, the women trick him into thinking their lovers (Connie Li and Sarah Sewell) are Moon Men. Director and UGA student Ellen Everitt gives her production a queer lens by replacing the men with women, winning one of four national grants for producing women’s plays of the past.

It’s presented through a Sallie Bingham grant by History Matters/Back to the Future in the Arena Theatre Mar. 7–8 at 7 p.m. Tickets in the form of an optional donation to Project Safe are $5 and available at the door. For more information, email emperorofthemooncrew@gmail.com.