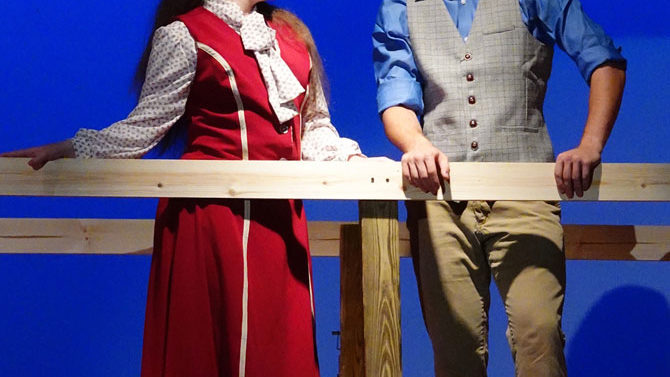 Newsies Small fry who collectively persist in the face of rampant corporate greed make for a timely musical—even if it’s set in 1899, when real-life newsboys formed a union and went on strike after publishing tycoons tried to make more profit off of poor children’s meager earnings.

In the 2011 musical adapted from the 1991 Disney film, 17-year-old Jack Kelly (Jeremiah Smith), a runaway who lives with other orphaned and homeless newsies, leads the resistance against newspaper publisher Joseph Pulitzer (Sam Hopkins), who raises the distribution price on the delivery boys in an effort to make bigger profits. We meet characters like vaudevillian Medda Larkin (Jordan Richey) and young reporter Katherine Plumber (Gracin Wilkins), who hopes covering the strike will get her a chance to cover hard news rather than the society page.

David Rooney of The New York Times praised the 2011 Broadway production as “an adorable pro-union, up-with-the-downtrodden musical… worth singing about. Even for the cynics among us, Newsies has a stirring, old-school sincerity that’s hard to resist,” he writes. “In its call to arms, its refusal to back down to big business, its fight for basic human dignity and its skepticism towards politics, the show has themes that resonate in our new depression.”

Some of these themes resonate even more strongly seven years later, but they come with songs to inspire and characters you can cheer for. With a crowd of talented, local scrappy kids and and big dance numbers under the direction of Shane and Terra Hannon, you can expect the best out of Oconee Youth Playhouse for this show.

Thoroughly Modern Millie Winder-Barrow Community Theatre presents the madcap, extravagant musical based on the 1967 movie that starred Julie Andrews as Millie, a small-town girl heading to the big city and trying to find her Mr. Right—preferably a rich one. Sutton Foster played the lead in the Broadway adaptation, which Charles Isherwood of Variety found to be an improvement over the film version, of which he was no fan. The “coy and convoluted romantic farce” offers old-fashioned Broadway pleasures, he wrote: “tapping feet, glitzy sets and costumes, happily ever-afters and smiles for days… in abundance.”

That small-town girl (Allie Hill) goes to the big city in the Roaring Twenties, planning to get a secretary job so she can snag a rich husband. But the hot boss she works for (Joe Allen) falls for her classy friend (Carie Ehling) instead, while gold-digging Millie finds herself attracted to a penniless man-about-town (Devon Kelsey) despite her plans. There are mysterious disappearances back at their ladies’ boarding house, a glamorous supper club, a kidnapping ring run by dumb, offensive criminals and plenty of dance scenes. Directed by Elinor Hasty, with a large cast ready to bring all the big numbers to life, it’s a show that gives you the chance to get away from it all with a laugh and a song.

The Servant of Two Masters Town & Gown Players’ wild, ridiculous, 18th Century farce rooted in commedia dell’arte combines all the silly of the past 300 years with a 21st Century sense of humor. It’s a story of rival suitors (Andrew Rabanal and Sarah Adams), one of whom is the cash-seeking sister of the late suitor she is impersonating; frustrated fathers (Stephen Ingle and John Olive); a romantic, weepy daughter (Mandy Riley); and a foodie servant (Patrick Najjar) so obsessed with where he’s getting his next meal that he tries doubling his intake by serving two masters at once. He finds a love interest of his own (Kat Marie Mitchell) amidst his dream and nightmare rolled into one: organizing two lavish banquets at once.

It’s all deliberately confusing, which is exactly how it should be. Directed by Mike Smith, this cast combines seasoned thespians and T&G newcomers with regular favorites, promising a fun, escape from the unfunny sorts of ridiculousness in the world.