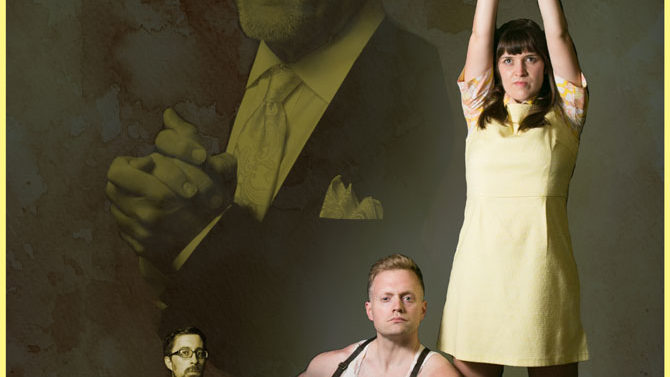 Urinetown: the Musical Since the show began at New York Fringe Festival and then opened on Broadway in 2002, its farcical vision of a drought-ridden dystopia where a huge corporation controls even something so fundamental as going to the bathroom—with the police power to enforce it—seems to keep getting more timely.

Director Melissa Darnell says, “If you want to escape the uncomfortable truths that define the current relationship between the Earth and, well, all of humanity, [this] is probably not your idea of a perfect show.” Unless, she adds, “you like to be challenged as a citizen and consumer, upbeat music and potty humor. Urinetown smuggles a dose of sobering social critique underneath a candy coating of stylized silliness.” Gloriously, the silliness is built around parodies of famous Broadway numbers.

“Nothing can kill a show like too much exposition,” says the brutal Officer Lockstock (Drew Doss) in his commentary to Little Sally (Isabel Arenas), but you need a little to understand a musical about urination. After 20 years of drought and corporate consolidation, all bathrooms are privatized by the Urine Good Company, under the greedy CEO Caldwell B. Cladwell (Don Smith). They are also expensive, have long lines and are the only place anyone is legally allowed to relieve themselves. This is a particular hardship for the poor, who are threatened with jail or worse. Bobby Strong (Josh Darnell) gets fed up with the corrupt police state, wins the heart of Cladwell’s daughter, Hope (Katie Chapman) and starts a Les Miserables-ish, free-to-pee revolution. With favorite local performers under the direction of experienced choreographer Darnell (who is making her Town & Gown directorial debut), you can expect T&G to be pulling out all the plungers on this one.

Tuck Everlasting: The Musical Who wants to live forever? Or, if not forever, maybe just a bit longer, to stay young a few—or a lot—more years. Are the joys of life and of youth more precious for being brief, though? Maybe a craving for more of what life has to offer in its brevity can take a person—or a whole family—too far. These are questions asked by the popular children’s novel, which has been adapted twice for film and into a musical that opened first at the Alliance Theater in Atlanta in 2015 and the following year on Broadway. Frank Rizzo of Variety said of the Atlanta production, “Despite its existentialism-lite sweep, this is an intimate family story of love, loss and the purpose and power of storytelling in the American folk tradition of Twain and Wilder.”

Eleven-year-old Winnie (Emile David, Abbey Hulsey), lonely and yearning for adventure and angry at her mother for not letting her go to the carnival the mysterious Man in the the Yellow Suit (Brian Seagraves) invited her to, runs off to the woods. She meets the fascinating Tuck family, who kidnap her to protect their secret: life everlasting. Will she drink from the magical spring and stay with them forever? Can she and the Tucks hide their secret from the bumbling constables and the creepy yellow-suited man? Brightstone’s production, featuring two casts with a total of 54 members, is the first in Georgia since the show closed on Broadway.

Tuck Everlasting: The Musical, by Chris Miller, Nathan Tysen, Claudia Shear and Tim Federle based on the novel by Natalie Babbitt, is presented by Brightstone Productions at Brightstone Theatre Friday, June 15–Sunday, Jun. 17 and Friday, June 22 and Saturday, June 23 at 7:30 p.m. with a 2:30 p.m. matinee Sunday, June 24. Tickets are $16 in advance, $18 at the door and available at 706-705-2599 or brightstoneathens.com.

Little Women A lot of folks have been excited about Little Women coming to “Masterpiece” on PBS, so this production of the 150-year-old classic American novel is well timed. Feminist Louisa May Alcott’s story has been adapted many times for stage and screen, but Circle Ensemble Theatre’s version has been freshly adapted by Chelsea Aloma Cogan and Joelle Ré Arp-Dunham. The “Masterpiece” series was a bit of a disappointment to some fans of the book, like Jacqueline Cutler of Variety, but the story itself has important lessons that should carry over to any adaptation. “Women are strong, and independence is vital,” Cutler writes. “Everyone must work hard. Money is not more important than art or love. They were radical messages in Alcott’s time and reverberate louder today.”

Many of us know the story of the March family, headed up by Marmee (Arp-Dunham) while Mr. March (Mitch Rothstein) is serving as a chaplain in the Civil War. March daughters Jo (Chelsea Cogan), Meg (Jenna Vaisvil), Beth (Kendall Lively) and Amy (Bailey Chastain) manage financial difficulties, sibling rivalry, work and suitors, including boy-next-door Laurie (Brian Jordan), as they grow into womanhood. Directed by Lisa Mende, the family-friendly adaptation pays special attention to Alcott’s language and style and is designed to suit Circle’s Winterville home.

Little Women, adapted by Cogan and Arp-Dunham from the novel by Alcott, is presented by Circle Ensemble Theatre Company at the Winterville Auditorium Friday, June 15 and Saturday, June 16 at 8 p.m. with a 2 p.m. matinee Sunday, June 17. Tickets are $20 general admission, or $15 for students and children. Group rates are available. For more information and tickets, go to circleensembletheatre.com or email circleensemble@gmail.com.

The Merry Wives of Windsor Shakespeare’s loveable wastrel, Falstaff (Jeremy L. Miller), is hard up for money and will do just about anything to get it. The victims of one of his cons, Shallow (Danielle Bailey Miller) and Slender (Greg Voyles), show up in Windsor to settle the score. Falstaff makes a mistake when he sets out to woo two rich, local wives (Helen DeMott, Joy Ovington) in hopes of conning them out of money, but sends them each the same love letter. Of course, they compare letters, and he becomes the butt of multiple jokes and revenge plots. There’s also a pair of young lovers (Bailey Mann, Sean Polite) beset by parental opposition, plus dueling suitors, kidnapping, mistaken identity and humiliation.

From the group who brought you Shakespeare on the Lawn, this time it’s Shakespeare Under the Stars, with pre-show activities for the kids and encouragement to bring a picnic, lawn chairs or blankets for a relaxed summer evening with The Bard.

The Merry Wives of Windsor is presented by Rose of Athens at Jittery Joe’s Roaster Wednesday, June 13–Saturday, June 16 at 8 p.m. Tickets are $16, $12 for students, $8 for children 12 and younger and $7 for the June 13 preview night. For more information, email tickets@roseofathens.org or visit roseofathens.wordpress.com.