Oddballs and Outsiders Search for Belonging 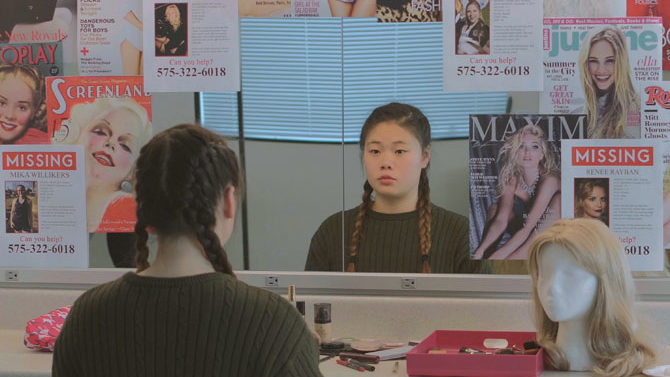 BFE Hating your looks is as American as apple pie. Teenage insecurities are hard enough without the burden of living in the middle of nowhere—BFE (“Bumfuck, Egypt”), Arizona, where you have the added isolation of being Asian-American surrounded by blue-eyed blondes. It’s cold comfort, when blonde girls start getting murdered, to think you’re too ugly to be a target. Panny (Connie Li) feels even worse when her own mother, Isabel (Vivian Lee-Boulton), agrees and offers plastic surgery to “fix” the Asian feature of her choice as a birthday present.

In BFE, there’s plenty of loneliness to go around. Isabel never leaves the house but dreams of soap-opera romance. Her brother, Lefty (Dave Kim), seeks romance of his own, and might find it with Evvie (Rachel Simpson). Panny is a reluctant pen pal of Hae-yoon (Xin Tian), who lives on the other side of the world and happily thinks that America is just like its movies and commercials. And then there’s the wrong-number guy (Tucker Turner), a lonely Mormon college student who keeps calling back to talk to Panny.

These characters are flawed and frequently funny in this strange, at times depressing place. Dramaturg Jieun Lee describes BFE as a complex world “where emotionally injured people confront each other and confront themselves” on a journey towards belonging. How do you belong when you’re not sure quite who you are as an individual? Director Farley Richmond says the play is about identity: “Who am I apart from my family? How do I establish myself in the world? Am I beautiful? Am I ugly?” To assistant director Lukas T. Woodyard, who is Japanese-American, this is a play that can resonate with anyone who is or has been young, but especially for the Asian-American UGA students working on the show. Panny’s experience of feeling isolated and stereotyped by ethnicity, of wanting to be accepted, is familiar to Woodyard and the other students. “When we were reading and talking about it,” she says, “we said, ‘This is my life.’”

It’s a rare chance to see characters like this on a local stage. This is the first Asian-American play UGA has done in its 125 years of theater. With this team and cast, BFE is a don’t-miss opportunity for local theater-goers this spring.

The Addams Family Capitalizing on their success with shows like Heathers and The Rocky Horror Show, the students of the Next Act musical theater troupe at UGA are taking on their most ambitious project to date. Charles Addams’ oddball, macabre, depression-era cartoons inspired the classic TV series, then films, and finally a Broadway musical. It features a classic, unconventional American family that lives on Cemetery Lane. They’re a good-hearted, ghoulish group of oddballs and supernatural relatives whose morose daughter, Wednesday (Aly Hertzog), falls in love with a shockingly normal boy-next-door type, Lucas (Jordan Richards). Can her parents, Morticia (Jordan Richey) and Gomez (Cameron Loyal), along with the rest of the family, act normal for one night when Lucas’ parents come over to meet them? As if any of us would want them to.

The musical has been an audience favorite since it opened on Broadway in 2010, and it has undergone much-needed adjustments since then. First produced in Chicago, the reviews were not good. The Broadway reviews were downright ghastly. It received zero Tony nominations. Critics hated it, but the people loved it; Patrick Healy of The New York Times wrote, “This seeming paradox amounts to a theater-world version of the Golden Fleece: the critic-proof smash.”

Before it went on tour, it got some plot and song revisions, then again after the tour. By the time it returned to Chicago, it got rave reviews: “comic perfection” (Chicago Sun-Times), “much more relaxed and infinitely funnier” (Chicago Tribune). It has a Vaudevillian-feeling, eclectic mix of musical styles and the opportunity for show-stopping dance numbers to go with one of the most beloved, koooky families from TV’s golden age.

Next Act recruited Larry Cox Jr., an MFA acting student who played the Emcee in UGA Theatre’s Cabaret in November and has been teaching musical theater performance courses for two years, to direct the show. He is ready for those dance numbers. He has recruited volunteer dance professionals from Atlanta and Athens to choreograph the numbers, encouraged mentoring at every level, followed professional equity procedures and scheduled rehearsals as rigorously as a fully-produced UGA Theatre show. His goal has been to make the experience professional, educational and fun.

The students are working extremely hard and are handed a lot of responsibility with this production. “They love the intensity,” says Cox. “You get to meet students from all disciplines who are hungry for the same thing, who love musical theater so much that they make the sacrifices to do a production at high value.” As a student-produced show with a very small budget, it won’t have expensive design or technology, but you can expect the best out of the performers and production team. “We have some incredible talent in the show,” Cox says, “worthy-of-a-professional-career talent. Some of the voices are incredible. I have singers that have a good knack for acting… and triple threats.”

This show is for two nights only, and Next Act’s musicals tend to sell out, so get there early to get a seat since there are no pre-sales.

The Addams Family, by Andrew Lippa, Marshall Brickman and Rick Elice based on the cartoons of Charles Addams, is presented by Next Act on Friday, Mar. 30 and Saturday, Mar. 31 at 7 p.m. Tickets are $10 and available at the door. For more information, visit them on social media @UGANextAct or email nextactmusicaltheatre@gmail.com.