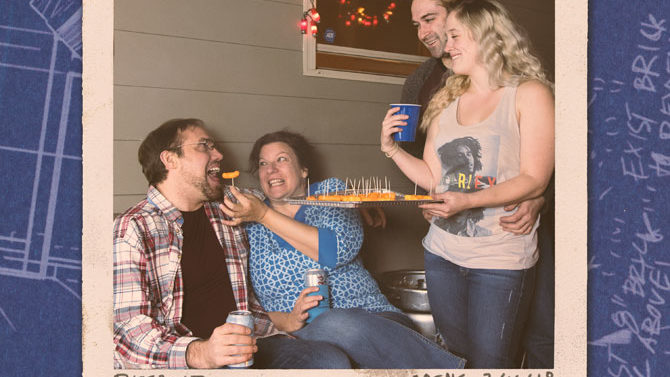 We all have our ways of coping in times of trouble and economic uncertainty, including, but not limited to: fretting, fighting, dreaming, lusting, joking, drinking or all of the above. Then there’s the stress of trying to figure out who you are in the world, which doesn’t end with adolescence. Between Town & Gown Players and UGA Theatre, audiences get all this and more, from the Great Depression (Brighton Beach Memoirs) to the Great Recession (Detroit). Families confront unemployment, relationships gone wrong, fantasies not yet realized and dreams gone sour—by two award-winning American playwrights who are experts at family dialogue.

DETROIT: In this case, Detroit is a state of mind rather than the literal location. It’s the idea of a once-great American city, ripe with economic promise and job growth, now in various states of stagnation and decline. Once upon a time, the youthful avatars of the American Dream expected to exceed their parents’ success with every generation, but the future no longer seems so bright in the age of increasing economic inequality. The characters of UGA Theatre’s Detroit could be any of us, anywhere, financially struggling and still wrestling with the question: “So what are you going to be when you grow up?”

We ponder this throughout our childhood. College students are frequently asked, “What’s your major?” Director George Contini says, “It is fairly easy to identify an American at a party—they always insist on asking people they’ve just met: ‘So what do you do for a living?’” As if the job defines who you are, not just your particular rung on the socioeconomic ladder that is increasingly hard to climb. Are we more than the sum of our credit scores? Is existential angst a luxury when at any moment we could lose all we have?

These are some of the questions Ben (John Terry) and Mary (Ami Corley) cannot avoid. The long-vacant house next door is finally occupied, so they invite the new neighbors (Taylor Wood and Matthew Suwalski) over for an all-American backyard cookout. What could possibly go wrong in socializing with these less credit-worthy strangers? Charles Isherwood of The New York Times calls it a “delirious, dangerous bacchanal” as Ben and Mary confront some of their worst fears of losing their precarious grip on a middle class existence. The promise of a white picket fence for grit and hard work may just be a myth, and not just for them; what happens to them could happen to us.

Sure, it will at times be uncomfortable, even disturbing, but it comes with the sort of absurd comedy that works in painful times. You can love these characters with all their annoying flaws intact while accepting them as a cautionary tale, the drunken human face of the Great Recession. D’Amour’s dialogue and characters are brilliantly true-to-life, and are in the best of hands with Contini at the helm. You can expect a top notch production with this team and cast.

BRIGHTON BEACH MEMOIRS: It’s an American standard by one of our most popular playwrights, Neil Simon, master of snappy one-liners and self-deprecating characters. As with many of his plays, it’s semi-autobiographical, so these are characters he knows quite well. Set in a Brooklyn neighborhood in 1937, the comedy has a backdrop of economic uncertainty and fear for distant Jewish relatives living under the Nazi regime behind the family squabbles.

The central character is teenager Eugene (Jack Dugan), in his coming-of-age story that Ben Brantley of the New York Times describes as, like so many of Simon’s plays, “retrospective wish fulfillment, transforming his often fraught childhood into sunny domestic harbors in which troubles only brought families closer and father really did know best.” Jack (Jim Nuss) is the head of a rather crowded house, with his wife’s (Mir Kamin) widowed sister Blanche (Ginny Simmons) moving in when she has money troubles. Add her teenage daughters (Antonella Perez Ferrero and Jessica Tiegs) and Eugene’s older brother Stanley (Andrew Rabanal), and things get too close for comfort.

If you prefer a family that balances out the drama with love and laughter while avoiding deeper darkness, this is the show for you. While the 2009 revival on Broadway was a surprise commercial flop despite critical praise, Patrick Healy wrote that it had less to do with the production than it had to do with evolution in American humor and what Broadway audiences are willing to pay big money to see (for example, the production had no big stars and it wasn’t a musical). It’s a better show for local and regional theaters, where there’s always a place for classic plays and quippy dialogue that can appeal to wider audiences. Town & Gown, which produces quality theater for a variety of tastes, should provide a welcome chance to laugh away your worries with a strong cast of favorites and newcomers, directed by longtime T&G member Hue Henry.

WANT TO ESCAPE FROM IT ALL? Two fairy tales are coming up soon: Cinderella, adapted by Forest Cloud, is presented by Rose of Athens at Seney-Stovall Chapel Friday, Feb. 23–Saturday, Feb. 24 and Friday, Mar. 2–Saturday, Mar. 3 at 7 p.m. For more information, visit roseofathens.wordpress.com.