Bring On The Dancing Orphans

June in Athens. Kids are out of school for a long, idyllic summer that for Mom and Dad lost its novelty within a week and now the rugrats are just in the way. Most of UGA has gone home, and the dormant townies are beginning to emerge, legs wobbly like newborn foals, shading their blinking eyes from the unfamiliar sun, to bask in the slightly less congested traffic and the many offerings available for their viewing pleasure.

Get In the Act: For those parents looking for activities for the kids this summer, the Rose of Athens theater company is holding their Summer Academy during the month of June for youngsters, grades 2-12. Featuring weeklong classes for the younger folk ($85) and a three-week course for kids grade 8 and up ($385), the Academy teaches movement and stage skills and the confidence that goes with them, great additions to any child’s developmental toolbox. Classes begin June 3. Contact Rose of Athens at 706-340-9181 or at roseofathens.org.

Sing, Fugitives: I must confess that while I enjoy most genres of theater, I have a distinct aversion to musicals about the poverty-stricken, those lavish productions chock-full of singing fugitives and dancing orphans. I suspect I may just be projecting here, but if somebody wants to shell out three figures apiece to see people struggling to pay the rent, he or she can come to my house, where that particular show has been running for years. Just bring a six with you, Daddy Warbucks. 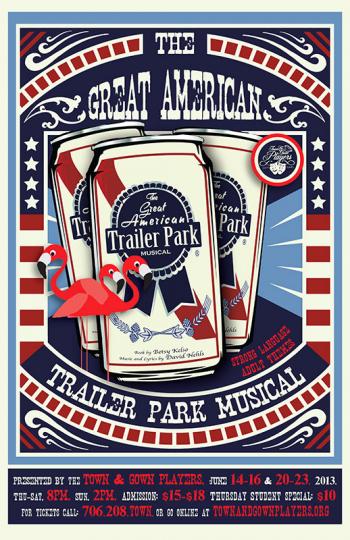 The New York Times calls it a white-trash Our Town.

Sometimes, however, a vein of potential comedy is too rich to be ignored. Such is the case with David Nehls and Betsy Kelso’s 2005 off-Broadway hit The Great American Trailer Park Musical, running on the Town & Gown Players’ stage June 14-23. Set amongst the bucolic anti-splendor of the Armadillo Acres trailer park somewhere in central Florida (land of my birth—I dare anyone who says Florida isn’t “the South” to head down there and say that), it’s a musical touching on the universal themes of hysterical pregnancy, disco, fugitive strippers, Dr. Phil and vinyl floor coverings, with a panoply of songs from every genre across the radio dial. The New York Times compared the play (favorably) to a white-trash Our Town, and it looks like a lot of fun. Jonathan Sparks, who knows his way around a musical, directs this one. Needless to say (so I’m saying it anyway), this is not going to be one for the kids.

The Great American Trailer Park Musical runs Friday-Sunday, June 14-16, and Thursday-Sunday, June 20-23, at the Athens Community Theatre behind the Taylor-Grady House off Prince Ave. Showtimes are 8 p.m. Thursday-Saturday and 2 p.m. on Sunday. Tickets are $18, $15 for students and seniors, and $10 for students on Thursday, June 20 and may be purchased at showclix.com or at 706-208-8696.

Act Like Adults: Town & Gown follows up its low-rent extravaganza with a Second Stage production of the Tony-winning 2009 comedy, God of Carnage, written by Yazmina Reza. It’s the story of two sets of parents who come together after a playground scuffle between their kids to settle things like adults, a lofty goal that quickly falls by the wayside once a few drinks enter the mix. This play won several awards and was adapted to film by Roman Polanski a couple of years back. Director Rick Rose has assembled a cast of T&G veterans—Allen Rowell, Bryn Anderson, Steve Elliott-Gower and Terrell Austin—and it looks to be superb. Definitely worth checking out.

God of Carnage runs one weekend only: Friday-Sunday, June 28-30, at the Athens Community Theatre. Showtimes are 8 p.m. Friday and Saturday, and 2 p.m. on Sunday. Tickets are $5 at the door, no reservations.

Be, Or Get Off The Pot: In other Town & Gown news, the company will hold auditions for its season-ending production of Hamlet, its contribution to the Shakespeare festival that’s become an August tradition in Athens, on Monday and Tuesday, June 17-18, at 7 p.m. This is the Big Kahuna of Uncle Will’s plays, the one on every aspiring actor’s wish list, so expect the turnout to be heavy, and bring your best chops to the audition.

Stand By Your Man: Daniel Tosh, star of Comedy Central’s wildly successful “Tosh.0,” will bring his standup act to the Classic Center on Monday, June 17 at 7 p.m. & 9:30 p.m. People are divided on Tosh’s act; some find it deeply offensive, while others declare it edgy and envelope-pushing. If you’re part of the latter crowd, you’ll want to jump on this as soon as possible, because there are a lot of you, and this show is pretty sure to sell out. Tickets range from $49.50 to $65 and are available at classiccenter.com or 706-357-4444.