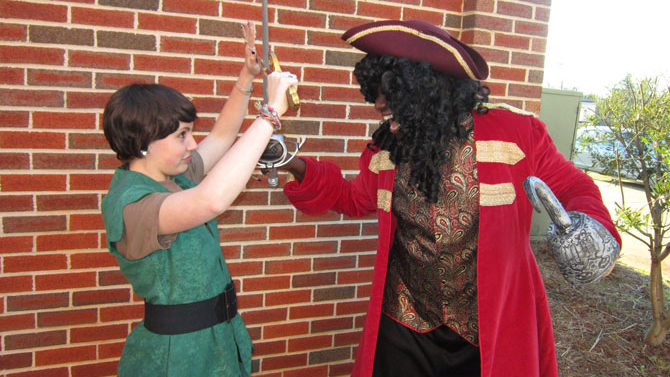 Oh, The Cleverness of You: We cover a lot of professional and community theater in this column, but we often forget that thereâ€™s some great drama coming out of our schools as well. You donâ€™t have to be a parent or a sibling to attend; the drama departments of our local schools are happy to entertain the community at large, too.

Clarke Central High Schoolâ€™s Central Players will stage the perennial classic Peter Pan at the school Thursday through Saturday, Mar, 22â€“24, at 7:30 p.m., with a 2:30 p.m. matinee on Saturday. I feel ridiculous writing this, but for those who may not know the story, it is a timeless tale of three English schoolchildren whisked off to a land of pirates, Indians, mermaids and high adventure by Peter, a magical boy whoâ€™ll never grow up. People who do know the storyâ€”and it was a play before it was a book, a Disney movie or that awful sequel with Robin Williamsâ€”will know to assess ahead of time whether they believe in fairies and prepare to clap accordingly. Tickets are $7 for adults, $5 for children, students and senior citizens and can be purchased from cast members or at the door. Contact Harriet Anderson for details at andersonh@clarke.k12.ga.us or (706) 207-5432.

What the What?: When announcing these upcoming shows, there are some blurbs you just canâ€™t paraphrase. Hereâ€™s the description for UGA Theatreâ€™s upcoming production, Dark Ride: â€œThis interactive performance lab production features a sideshow huckster who travels with a mummy said to be John Wilkes Booth, a sinister publisher, a frenzied translator, a jeweler and a thief, all of whom wind up at an oculist’s convention in Mexico.â€

Rock Me, Amadeus: When I first arrived at UGA as a snot-nosed freshman in the fall of 1985, I was in the University Bookstore to buy textbooks and came upon a display of cassette tapes, cheapies like you find at the car wash, including one row of tapes with a selection of classical pieces by â€œWolfgang AMADEUS Mozart.â€ Evidently that was for the benefit of everyone whoâ€™d never heard of Mozart but managed to sit through the recent Oscar-winning film Amadeus without actually registering the name of the main character.

Town & Gown Players will present Peter Shafferâ€™s Amadeus Apr. 13â€“15 & 19â€“22 at the Athens Community Theatre, and for those who donâ€™t know, itâ€™s about Mozart. The composer. More accurately, it is about the rivalry between Mozart, the child prodigy who grew up to be the reigning rock star of 18th-century Vienna, and Antonio Salieri, composer to the court of Emperor Joseph II, who curses God for squandering His gift of musical brilliance on the baroque version of Russell Brand. In reality Mozart and Salieri were friendly rivals, but Shafferâ€™s play has them as mortal enemies in a complex and masterful meditation on the nature of genius, the tortured logic of hatred and the twisted path of revenge.

Give It a Shot: As is usual for Town & Gown productions, the Monday and Tuesday between performance weekends is given over to auditions for the next T&G Main Stage show. On Apr. 16 & 17 auditions will be held for Dirty Rotten Scoundrels, the musical version of the movie about rival con-artists competing for the hand and the money of a wealthy and naÃ¯ve young thing. Auditions will consist of â€œa short vocal excerpt [bring sheet music], movement portion and readings from the scriptâ€ and begin at 7 p.m. at Athens Community Theatre.

Fresh and Local: No Shame Athens, the open-mic performance outlet of the Rose of Athens Theatre company, will devote an evening to a staged reading of Donkey, a new original play by local playwright John Patrick Bray, on Sunday, Apr. 22 at 8 p.m. at Hendershotâ€™s Coffee Bar. For those unfamiliar with staged readings, a group of actors will read the script aloud in performance, invoking the feel of old-time radio plays. For the playwright, this is an important step in the creative process, a chance to actually hear out loud the words he or she has been staring at on the page and hearing inside his or her skull. A live reading gives cues for further tweaking of the script before itâ€™s ready for the stage, so what youâ€™ll get is an opportunity to see a play in the last trimester. Itâ€™s fascinating stuff. Admission is free. Contact noshame@roseofathens.org for more details.