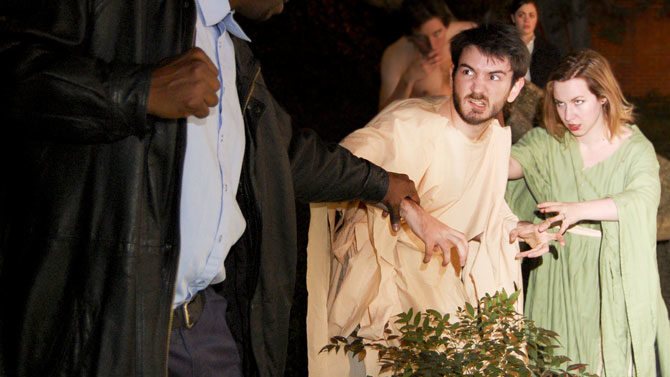 A conspiracy theory I recently discovered surrounds the author H.P. Lovecraft. For those who donâ€™t know Lovecraft, he was a writer for the pulp magazines in the 1920s and â€˜30s, notably the popular Weird Tales, wherein he produced a loosely connected series of stories about a race of cosmic gods who have spanned the stars for eons and now lie dormant, waiting for the right and inevitable moment to awaken and enslave and devour us all. Lovecraft dealt in the same feverish mastery of growing horror and dread as Poe, and suffered the same frail and tenuous grip on sanity in real life, so his stories of these Elder Gods, particularly the one called Cthulhu, are shot through with terror and violent madness. Lovecraftâ€™s â€œCthulhu mythosâ€ resonated with his readers so much that several of his peers wrote their own stories set in the same tortured universe, and contemporary authors such as horror master Brian Lumley continue to plumb that well today.

The theoryâ€”and there are books about thisâ€”posits that what Lovecraft wrote was not fiction but an attempt to relate visions of an actual extra-dimensional pantheon of ancient, colossal monsters waiting on the threshold between their world and ours, visions that his particular mind could receive but of such enormity that, like his characters, the attempt to understand them stretched his reason to the breaking point. The only way Lovecraftâ€™s frail psyche could wrap itself around such overwhelming horror was to frame it as fiction, the theory goes, and then convince itself that Cthulhu and his brethren were in fact mere products of the imagination. Like most conspiracy theories, this one takes the long and winding bypass around logic: if the stories of the Elder Gods are simply stories, then why is it that only freaky horror authors write them, hmm?

Real or not, Cthulhu is poised to descend upon Athensâ€”tentacles, batwings and allâ€”when the Town & Gown Players present The Call of Cthulhu Feb. 24â€“26. It is one of the companyâ€™s most ambitious projects to date, an attempt to awaken the sleeping god of eldritch insanity on the community-theatre stage, and on a Second Stage budget, no less. Lovecraftâ€™s story of the same name was adapted by Ron N. Butler as a radio play and presented at DragonCon in 2009 by the Atlanta Radio Theatre Company. T&G director Cord Sibilsky has taken the radio play and further adapted it for the stage, begging the question of how to take something that can only be described and bring it to life.

Lovecraftâ€™s story relates a series of isolated but connected incidents that reveal a worldwide epidemic of madnessâ€”the rise of a human-sacrifice cult in the deep South, the horrifying dreams of a sensitive young artist in Rhode Island, and a naval expedition in the Pacific that runs afoul of a ship manned by a crew of the insane. The stage production presents these parts in interwoven form, a tapestry of horrors that culminates in the rise of a city of perverse architecture and impossible forms from the depths of the ocean: the resting-place of the dreaming god now awakenedâ€¦

Strange stuff, to be sure, but what is even more unusual is the second half of the bill. Being the adaptation of a radio play, The Call of Cthulhu is presented in one act about 45 minutes long. For Friday and Saturdayâ€™s shows, the other act is given over to Effieâ€™s Club Follies, Athensâ€™ long-running â€œslap-stripâ€ burlesque troupe. The Effieâ€™s girls have been laying low for the last couple of years, as several of the core members spun off into the Atlanta-based troupe The Yes Girls. Though theyâ€™ve certainly kept their hand in the local scene with the popular monthly Burlesque Beta shows, this will be the first full-on Effieâ€™s show weâ€™ve seen in awhile.

For the uninitiated, the Effieâ€™s girls go beyond the traditional bump-and-grind with a distinctly vaudevillian emphasis on musical comedy that often pushes the envelope of good taste, with hilarious results. An Effieâ€™s show plays with the audienceâ€™s comfort zone. You shouldnâ€™t be watching as the costumes come off or laughing at the sick humor, and yet you are. Their combination of inventive musical numbers and classic striptease is that good.

Itâ€™s an odd double-bill but one that may work well, the light comedy of Effieâ€™s Club Follies serving as a counterpoint to the heavy doings of The Call of Cthulhu. One thing is certain, howeverâ€”successful or not, itâ€™s good to see this kind of artistic collaboration in practice, and itâ€™d be nice to see more cross-pollination from the various segments of Athensâ€™ art and performance communities, coming together to hatch the right kind of conspiracy.