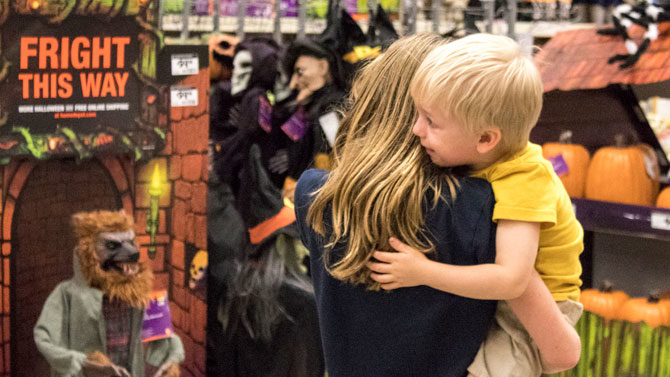 This year—in my house, at least—Halloween is more frightening than usual.

Let’s start with costume shopping for a middle-school girl. It’s bad enough that the costumes for smaller children are entrenched in gender stereotypes. (Why are the little unicorn costumes for girls? Why are the lions for boys?) When you get to be in middle school, it seems there is a line drawn: You’re either gross, bloody or a video game character, or you’re pretty, cute, sweet or some sort of mythical creature (or video game character). In other words, you’re wearing a “boy” costume, or you’re wearing a “girl” one. And, of course, all the girl costumes include some type of skirt.

I offhandedly mentioned these costume inequities to my daughter, and she saw exactly where I was going. “Oh yeah, those costumes are totally sexist!” she declared. I get that half the fun of Halloween is the fantasy of it. (The other half is candy.) And I will also admit to being a fan of over-the-top puffy dresses for the holiday because, well, when else are you going to wear that? But it shouldn’t be your only option.

It’s much the same for younger children, except instead of stockings and short skirts, there are versions of costumes with leggings topped with tulle ruffles. It’s downright frustrating to stand with your toddler in front of two versions of the same cat costume—one with fuzzy legs and a bow tie, one with a puffy skirt and pink gloves—and ask him to decide which “cat” he wants to be. (Answer: Whichever one he wants.)

Understand that I’m not trying to be a Halloween grinch. The costumes, for the most part, are cute and play up silly fantasies. I’m just asking that they not be so pre-packaged. I’d happily buy kid-size ears, tail, fuzzy gloves and boots and piece together some black clothes to make a cat—whichever boy or girl version my child wanted. Now we’re using our imagination a bit more, as well as getting pieces that can be used for more than one night. (Yes, even cat ears.)

While Halloween might seem scary for me, it’s a whole other level of fright for my 2-year-old. “Halloween scary,” he tells me when we walk into stores, grabbing my face and pulling it so he can look me square in the eyes. He refuses to walk on his own and buries his head into my neck. This is the first year he recognizes what’s going on, and so far he’s not a fan.

His reaction to ghosts and goblins—and, honestly, even pumpkins—has gotten twisted up with a larger conversation about how we expect our boys to act. Our costumes play to our boys’ desires to be drooling zombies, bloodthirsty killers or some sort of pixelated hero—but what are our everyday expectations? If Halloween is a time to explore fantasy and be something we’re not, does this mean we expect our boys, during the other 364 days of the year, to be quiet, mild-mannered and mindful?

Raising a daughter is full of stresses at any age, and Lord knows for every two steps forward we seem to make as a society, we end up getting pushed back one step. But the same can be true for raising boys. We push our girls to break glass ceilings and embrace STEM. Do we teach our boys to embrace their feelings and be sensitive?

This dawned on me one afternoon at a local home improvement store. My 11-year-old daughter marched right up to a display of Halloween decorations and laughed as they began to cackle at her. My 2-year-old shrieked in fear. My first reaction, after he ran into my arms, was to pump him back up. “C’mon boy! Don’t be scared!” said the voice in my head.

It’s easy to tell a boy to “be a real man,” but what does that mean? Instead, let’s tell him to be “a good man.” If we all did this, our country might be a lot less scarier this Halloween.