Trouble Limiting Your Kids’ Screen Time? There’s an App for That 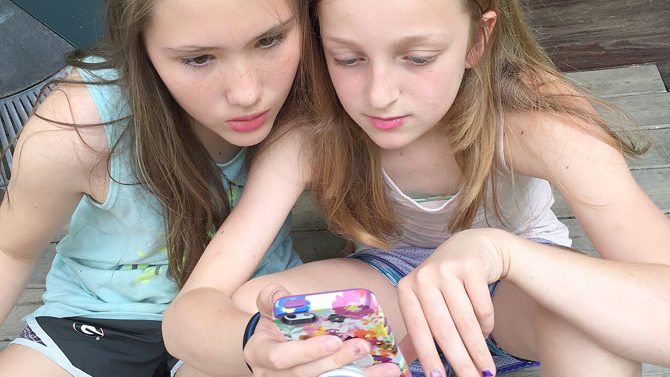 Nobody wants to do it, and yet we all end up doing it anyway.

I’m talking about smartphones, and that inevitable moment when you break down and get one for your child. I don’t mean a phone plan—let’s take these things one step at a time!—but rather, an older smartphone that can access the internet and be used for simple communications, such as texting (or even FaceTime, if you link it with an iCloud account).

I laugh at parents, collectively, because we have such a love/hate relationship with our children’s use of technology. We want them to be tech savvy, yet we grouse at the time they fritter away playing Roblox or Minecraft or any number of games that involve putting your face on things and changing your hairstyle. But let’s be honest: These games are not why we gave our kids smartphones. So, inevitably, we have to talk about screen time.

As I stared down summer break over the past few months, I realized one thing had to happen: My 10-year-old needed some serious structure on her phone. Otherwise, she was going to spend every day not in school staring at it. So, I began trying out various apps that lock down the phone’s screen when a certain time limit is reached. I’ve come to one sad conclusion: There is no free ride with this one, my friends. App developers know you want this, and they know you will pay for it.

Admittedly, there are a lot of options out there. I tested four, but by all means, explore the many, many others out there. You will find, though, that there are similarities between them all: They allow you to set certain times when the phone is locked down; they allow you to set a specific time during the day when the phone has access to whatever you want; and most will connect to a parent’s device so you can monitor their usage and even grant or remove time. Here are the lessons I learned with each:

Kidslox ($2.99/month, $29.99/year): This was the first app I downloaded, and for a while, everything worked out fine. The app is easy to navigate and, most importantly, it restricted access to the time-suck games that have become the bulk of my daughter’s afternoons. At some point, though, I ran into a snag with how the app was connecting between my phone and my daughter’s, and the timekeeping feature stopped, which was a problem. (It might have been a system update or an app update—I’m still not sure.) In any event, I looked for another option.

UnGlue ($10/month, $72/year): This app uses a VPN connection to pair your child’s device with its time-keeping capabilities. And like all apps I tested, this feature means the app is really only useful when your child is on Wi-Fi (although if you have an iCloud account set up, most features on their phone are only accessible via Wi-Fi anyway). Like Kidslox, UnGlue was great about communicating with me—it sends regular emails with screen-time tips, research, etc. I did find the interface to be a bit easier to navigate, and the connection seemed more stable. Another feature I liked was the ability for my daughter to do other things in exchange for screen time—for example, read for 30 minutes to get 15 additional minutes—and warnings that would flash to tell her when her time is almost up. Only downside? It’s pricey.

OurPact ($1.99 or $6.99/month, depending on devices): Like UnGlue, this app has a fun design and offers many of the same features, such as individual app blocking and restricted times during the day (such as “homework time” or “bedtime,” when it shuts off access to games). The setup was a killer, though. This app also required a hefty download from an external site (which required me to move a lot of photos off my daughter’s phone). When it then required the same of my phone in order to control or monitor what she was doing, I cut it off. After using a couple apps that didn’t require this, I decided not to go down this road—although if you are only looking to control one device, this app gets a lot of good reviews and is pretty cheap compared with comparable apps.

ScreenLimit ($39.99/year): I downloaded this one because the review I read said it was free, but it’s really not—the app-limiting features you’ll inevitably want are extra. I was also, admittedly, tired of setting up these things on my daughter’s phone, so right now it’s set up but not linked to my phone (which is fine, really, although the UnGlue feature was nice, allowing me to see how much time she’s spending on various apps). The interface isn’t as sleek as some of the others, but it does include the countdown clock so she knows how much time is left.

The verdict? Well, as much as I liked UnGlue, it’s hard swallowing that price tag. For the same price I can get an unlimited subscription to ScreenLimit, so while I downloaded it in a hurry, just to get something in place on her phone, I’m willing to give it more time. Because, honestly, even my search for screen time-limiting apps has a limit.