Tips for Keeping Your Kids Entertained in the Car 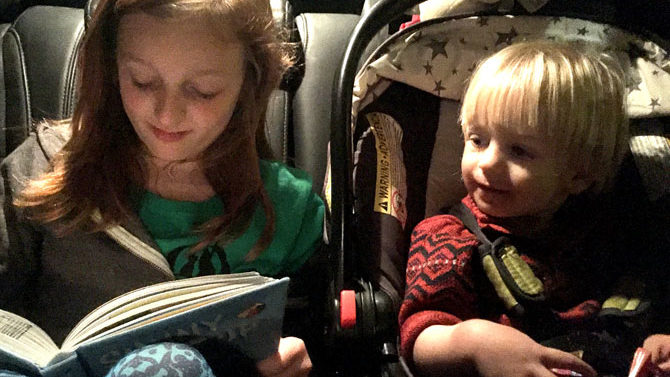 Last year, we had the bright idea to visit Maine for a summer vacation. It was lovely, and the weather was great. And then we drove home.

Fifteen hours later and still not in Georgia, my 9-year-old declared she wanted to play “I Spy” for the umpteenth time. I swear, there are only so many things you can spy off the rural North Carolina interstate.

This year, as we prepare for another multi-day car ride, I’ve vowed to be a little more prepared than replays of “I Spy” and “The License Plate Game” (also not fun). And because we will be traveling with kids who are in two completely different developmental stages—one is 10 and one is 19 months—I’m compiling a list of games that will keep big sister entertained enough to be nice to little brother… hopefully. With that in mind, here are a few ideas for that long car ride you’re planning this holiday season. (Note: These have all been run past my highly cynical 10-year-old, so you know they’re not that lame.)

Learn Letters: Whether your kids are just learning the alphabet or are superstar readers, there are a few games that incorporate the letters on signs and license plates. For younger kids, you can challenge them to look at the signs, billboards and license plates around the car to go through the alphabet. If you’re in rural areas (and that letter K is pretty scarce), you can bend the rules to include the car’s interior, too. For older kids, you can tweak this game to find words that start with different letters, starting with A. Then you can move to more challenging stuff, like using the letters on license plates to construct sentences or weird acronyms (BCM=“Bench cows more”).

Bring a Folder: For our trip to Maine, I fully intended to bring some printed car games. Obviously, that never happened. But I have learned my lesson. Pinterest is full of links to printable games; some cynical-daughter-approved ones include variations of “I Spy” and a scavenger hunt for things such as fast-food restaurants, road signs or things off the side of the road. I might even take this one step further and make up my own scavenger hunt checklist specifically for I-85 through North Carolina: pig farms, massage parlors, construction pylons and flags. If you have time before you leave, you can also hit up a dollar store for puzzle books; while my daughter tends to get carsick on smaller roads, she’s usually OK on the interstate, and she enjoys the occasional word find.

Games That Work in the Car: Hands down, Uno is the best game when you’re on vacation. Most ages can play it, and most everyone knows the rules. In our car it’s a little more awkward—one adult vs. one child—but I’ll probably grab a deck of regular cards for some old-fashioned games of War. Battleship and Connect 4 are also good travel companions, especially if you have multiple kids sitting near each other.

Listen Up: In our car, the driver gets to control the radio. Luckily, our daughter has her own headphones, which keeps her complaints about the lack of Taylor Swift to a minimum. But without Wi-Fi—and because I refuse to download tons of movies—her secondhand iPhone is rendered powerless on the road. What it can be used for, though, is kid-friendly podcasts. I’ll admit, I’ve tried to broach this idea with my daughter for a couple years now, but this is the first year we have the technology to follow through with it. A few titles I’ll be downloading for the trip are “Book Club for Kids” (mostly middle school novels, but the most recent podcast is about Wonder), “Wow in the World” (produced by NPR, I’m hoping it can be a substitute for the endless slime how-to videos she watches on YouTube) and “The Unexplained Disappearance of Mars Patel” (since we’ve been watching “Stranger Things,” this Peabody Award-winning podcast seems like a good next step).

I could write a whole other column on snacks, but I’ll spare you. Let’s just keep our fingers crossed that next year we’ll be able to finally spend Thanksgiving in Athens.