DIY Kids’ Costume Ideas to Make at Home—if You Dare 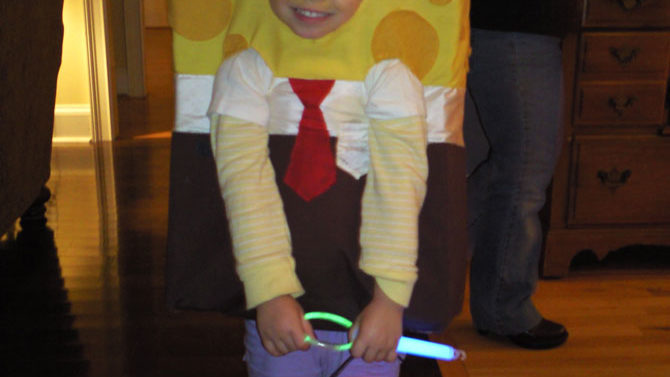 The other day I had an out-of-body experience while talking to my 10-year-old. I suddenly saw myself from another angle, as if I were floating above and watching while the most ridiculous phrases fell out of my mouth.

She was angling for a store-bought Ginny Weasley costume. “No,” I replied. “I do not want to drop $50 on an outfit you will wear for one night when we can make it ourselves.”

As the sentence left my lips, I thought about all the money my parents spent on prom and semi-formal dresses and realized that, yes, payback is a bitch.

And my 10-year-old does have a point. Every year, I embark on a quest to make authentic, homemade costumes. No matter how wonderful the image appears in my head, the end product is always… different.

It started with a butterfly when she was 3—OK, easy enough, with store-bought wings (which is kind of cheating). But last year, my carefully sculpted Maleficent horns, which seemed so cool in the kitchen before leaving for trick-or-treating, turned awkward and frumpy when lined up with others for candy. Things went sour when, after her horns started to flop, she ran into another little girl with a much more professional version of the costume. She’s been harboring the embarrassment ever since. 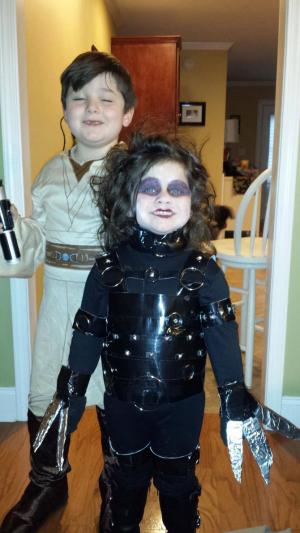 Before they get too old, dress them up in your own childhood favorites—nothing says the ’90s like Edward Scissorhands.

That said, I’m always in awe of the parents who pull them off, and the kids who wear their imaginative creations with abandon. I’ve realized that many of the homemade costumes fall into three categories, and so, in the spirit of Halloween preparedness and Athens’ last-minute tendencies, I present them to you in case you needed some inspiration. Happy constructing.

Pop Culture: This is something we can get away with only while our children are young. The key to this costume is dressing your toddler as a character from your own childhood, a reference they will never quite understand and never agree to once they’re older. Some of the best iterations of this have involved Prince, David Bowie, Edward Scissorhands and Marty McFly in a toddler-sized DeLorean. If you’re brave enough to slap on face paint and tease their hair, rock on with your bad self. This is probably the only chance you’ll get.

Felt Fever: If you grew up with the Muppets, you will understand. I have no idea how Jim Henson got his characters to look so good, but thanks to him, I am convinced anything made with felt and Styrofoam will look equally good. Of course, I’m completely wrong, but it’s worth a try. These costumes are the ones that involve ingenious uses of everyday items, usually found at Big Lots or dollar stores, turning them into a new, creative idea. The most basic involves a one-color track suit with felt strategically added to create a new look. But other items, such as pool noodles, duct tape and construction paper, do the trick, too. Some of these types of costumes can be the most creative—and also the silliest.

Out of the Box: The third category I’ve assigned to homemade costumes is the type made from 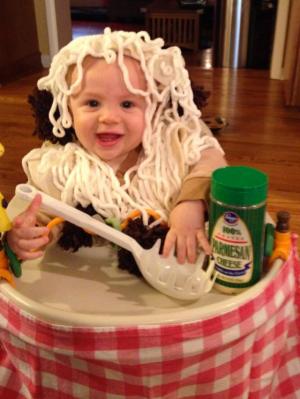 Sometimes it’s easier just to create a tableau. For this spaghetti baby, save the Parmesan cheese container and grab a mop head, tablecloth and spoon from the dollar store.

boxes. SpongeBob Squarepants is the first example that comes to mind, but I’ve seen a range of ideas over the years—even one child who made himself into a stove. As I realized several years ago with my own box-based costume, the main issue is transportation: I was a “binder full of women” (Remember Mitt Romney’s 2012 campaign gaffe?), and when it came time to hop in the car and head to the Wild Rumpus, I had no idea how to transport it. Often these costumes are perfect for walking around, but you can’t sit down in them. So, plan your evening accordingly.

As you roam the streets this year in your homemade outfit, keep this in mind: No matter how awkward your homemade costume turns out, remember that Halloween is about fantasy and imagination. Want to wrap yourself in blue tape and call yourself ebola? Go for it. Want to wear a piece of cardboard painted black and call yourself roadkill? Go for it. We can all pretend we’re whatever we want. That includes great sculpture artists using duct tape, spray paint and cardboard.