After a Lot of Drama, the Athens Library Reinstates a Popular Storyteller 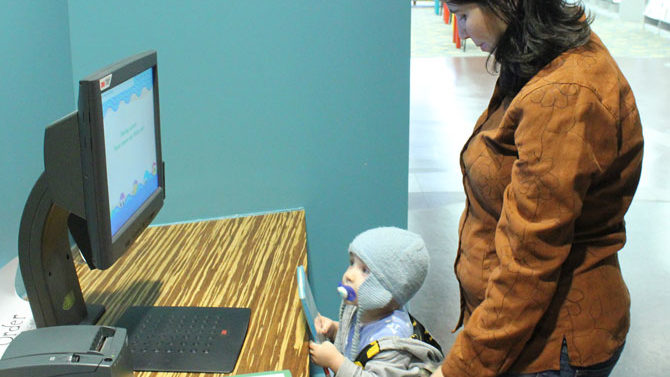 The final chapter in Storytimegate has been written, and it’s a happy ending.

For anyone who doesn’t frequent the weekly storytimes at the Athens-Clarke County Library, I’ll catch you up on some drama—and I’m not talking about what’s on the pages. In early November, one of the two main storytime hosts, Rebecca Ballard, was taken off her regular Tuesday gig and given new duties. Miss Rebecca, as she is called by her legions of knee-high fans and their caregivers, has been a mainstay on the storytime scene for more than five years, known for her puppet plays, live singing to complement the stories and silly characters and voices she adds to them.

Following a bit of reshuffling in the children’s department—in an interview just before Christmas, children’s librarian Jonathan Dolce told Flagpole that a new position opening in the department left a hole in their outreach efforts—Ballard was tapped to lead outreach. “I looked at the duties the children’s librarians had, and Miss Rebecca has more than I would ask someone to do,” Dolce said. “She’s very familiar with the outreach, whereas I wasn’t. She’s really the best person for it.” Dolce, who started at the library about six months ago, took over Ballard’s storytime slot on Tuesday mornings.

Ballard didn’t want to get involved in the back-and-forth of office politics, but it was obvious among her followers that this change was difficult. While she didn’t want to discuss the reassignment with me, she did say storytime is her favorite part of her job, and it seems to be a great way to use the education, music and theater classes she studied on the way to getting her performing arts degree. But while Ballard stayed mum, moms, on the other hand, did not.

What’s the phrase: “Hell hath no fury like a woman scorned”? Well, a parent who loses a favorite storytime host takes it up a notch.

First came the Facebook posts, then a petition on change.org. Eventually, angry parents heard back from library director Kathryn Ames, who explained in an email that Ballard would alternate Tuesday storytimes with Dolce. (Now, I’m not wading into office politics, either, but when you consider the time it takes to plan storytimes—up to eight hours, as Dolce told me—along with assigning new outreach duties, and then you add another person into the storytime host mix, I feel like that’s perhaps not the most efficient schedule. But heck, I just ask questions. I’m not here to judge.)

The alternating weeks made some parents feel better, but the whole sequence of events still didn’t sit right with many. Which is why local moms rejoiced to learn that as of this month, Ballard has been given back all her regular storytime posts. You can now catch her Tuesdays at 9:30 and 10:30 a.m. in the children’s section’s multipurpose room.

“I have a ton of giant programs coming up,” Dolce told me last week. This includes a new, grant-funded reading-enrichment program for Hispanic students, preparing for the summer reading program and also launching a new initiative for parents to read 1,000 books to their children by the time they hit preschool age. “So I’m stepping into administration and not the programming side of it. … [Rebecca] already has an excellent following.”

More Library News: If you haven’t been to the library with your kids in a while, you should really make a note to head over to Baxter Street. Not only is the building’s construction-newness starting to mellow (in a good, homey way), but there are some interesting programs for kids of all ages.

For example, kids from about age 7 through high school can drop in for chess, 4–5:30 p.m. Mondays. There is a group of volunteers with the Chess and Community program who will teach all levels, or kids can just introduce themselves and play against each other.

The library is also hosting a promotion with Ringling Bros. and Barnum & Bailey circus to give away a free ticket to the show when a child has read five books. The performances take place Feb. 19-March 1 at the Gwinnett Center in Duluth, and tickets start at $15. Check in at the children’s desk for more details on the program.