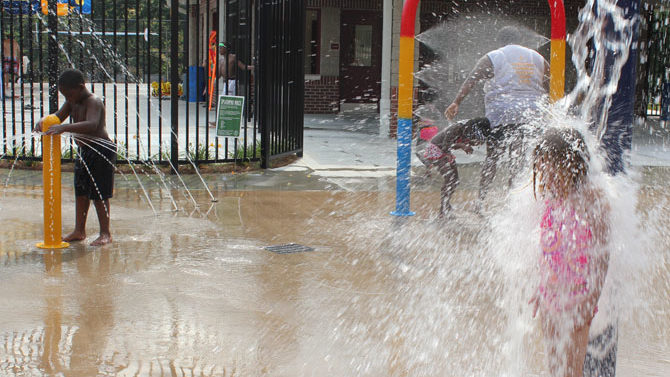 The nearest place you could take your kids to go run around at a water park used to be Gainesville. (The Frances Meadows Aquatic Center is 45 minutes up the road.) But no more.

Thanks to some SPLOST money, Athens now has two “splash pads” to help you cool off—one at the newly renovated Rocksprings Pool (291 Henderson Extension), and the other at East Athens Community Park (200 Trail Creek St.).

Personally, I can’t believe it’s taken this long to get some kind of waterpark in this area. I’ve taken my daughter to play in the water at both Ben Burton Park and Watson Mill Bridge State Park, but it’s hard to get past the thought of sliding on a rock and heading to the emergency room. Which pains me, because I basically grew up playing in streams as a kid, and I want my daughter to have the same experience. But for the big city life of Athens, the splash pads are a step in the right direction. Now, if only we could twist some officials’ arms and get a kid-friendly fountain installed somewhere downtown as part of some master plan improvements. Hey, a girl can dream, can’t she?

But If It Rains: The openings of the splash pads were well timed, since most of this spring and early summer was stuck under rain clouds. Even so, we’re bound to have some rainy days in the future, which is why you should take the kids over to Double Dutch Press (1377 Prince Ave.) the next time you need to get out of the house. Owners Amanda Burk and Katherine McGuire each hold master of fine arts degrees from the University of Georgia but went on to do all sorts of interesting things before deciding that they could no longer resist the smell of ink. So, they met back in Athens to start their own shop. Today, the duo does screenprinting and printmaking on a variety of presses and other methods, and they have developed workshops specifically for kids, among a slate of other workshops. Along with summer camp sessions for kids ages 8 and older, classes for kids of all ages and skill levels include ’zine making and variations on linocut methods.

After taking a linocut class myself (cut a design into a piece of linoleum, ink it up and run it through the press), I signed up my 5-year-old for a similar experience. Except instead of getting a set of V-shaped knives, she used a pencil to draw a design into a plastic foam plate. She inked it up, ran it through the press—OK, the grown-ups helped with that—and eagerly set about making another print. By the time we were packing up to go, she had experimented with all sorts of paper cut-outs, inked strings and multicolored masterpieces. Plus, she got to wear a cool ink-stained apron—and the ink on her hands took the rest of the weekend to come off, which meant she was excitedly examining her multicolored hands for a few days. Bonus points.